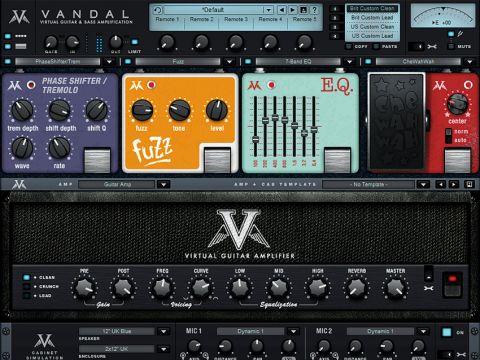 Vandal isn't feature-heavy, nor is it covered in faux Marshall logos, but it's got it where it counts, with impressively real amp tones.

The Vandal guitar/bass amp simulator first saw the light of day as one of the included plug-ins contained within Magix's Samplitude DAW for PC. Now it's available as a separate product, and what's more, it's available for Mac, too - a first for Magix.

Like most amp simulators, Vandal provides a variety of virtual amps, cabs, miking configurations and effects. Unlike many of them, though, it uses physical modelling rather than impulse responses to calculate the behaviours of the speaker, cabinet, recording space and microphones.

Installation is via a single disc, and a download version is also available from the Vandal website (the boxed version includes Samplitude Silver for PC). There's no standalone version: Vandal is a VST/AU plug-in, with a single-screen interface.

The positioning of components in the UI follows the route of your signal. The strip at the top is where I/O levels can be set, presets loaded and MIDI control managed. Each patch in Vandal comprises four complete setups (aka scenes) and these are intended for creating variations for use throughout a song - eg, to bring in a delay effect during a solo, or switch to a clean sound and so on. Annoyingly, however, there's a digital click when you switch presets - it's not loud, but it's noticeable. Hopefully this problem will be cured in an update.

There are about 80 presets and, as well as a bunch of generic ones, there are folders for some that mimic real amps (US Hotrod Stereo, Brit800 Lead, etc) and thinly-disguised song-mimicking patches (eg, Smoking Under Water). Many of the presets feature multiple scenes, too.

The amp section is where Vandal starts to diverge from most of its competitors. It's not based on any real hardware and, in fact, there's 'just' one guitar and one bass amp. Magix's philosophy is that, owing to the flexibility of the two amps, you'll be able to dial in a tone for any occasion, and there is indeed plenty of variety to be had.

You can choose your preamp model (Modern High Gain, British, Classic), select a channel (Clean, Crunch, Lead) decide on Class A or A/B power amp and dial it all in with typical amp-style controls. The Voicing section's Freq and Curve controls introduce an EQ curve throughout the amp circuitry, giving dramatic tonal variations. The bass amp has different controls and includes an opto-compressor.

The speaker, cabinet, room and mic are the physically-modelled components of Vandal, and are thus potentially its most interesting assets. As well as 12 speaker types ranging from 10" to 15" cones in numerous sonic flavours, Vandal offers a small choice of cabs: five guitar, two bass. This leads to a lot of possible combinations, including artificial ones like placing 15" speakers in a 12" cab.

With the advanced settings, you can vary speaker distortion (something that straight-up impulse responses can't replicate), set the balance between speaker/enclosure and tweak the cabinet's damping, all to get a tighter, less boomy sound.

Not unusually, the microphone setup consists of two mics, but for each, you have only a choice of condenser or one of two dynamics. Still, obtaining infinite variations of sound is easy enough with Vandal - it's just a matter of tweaking the controls to vary the axis/distance and set pan, mic phase and levels.

Room size is variable and so is degree of damping of sound, and these parameters have subtle and realistic effects on the sound. We compared Vandal's cab/mic/room simulation to that of AmpliTube 3, and we'd say that AmpliTube generally came across as a touch more 'in your face', but Vandal reminded us more of a real rig.

Any guitar or bass player will tell you that the subjective playing 'feel' of an amp is a crucial factor for inspiration. In our tests, we deemed that Vandal often felt slightly closer to a real amp than two of its esteemed competitors, Guitar Rig 4 and AmpliTube 3. Sound-wise, its strengths mainly lie on the 'crunch-to-metal' tonal continuum.

Clean sounds, such as the Funk Auto Wah and Jazz Combo Room presets, don't especially impress - both GR4 and AmpliTube do these kinds of sounds better, we reckon. The rich, complex and abstract guitar effects that GR4 can provide (and which some people find useful on a variety of sounds, not just guitars) aren't Vandal's department either, which is fair enough. On the bass side, it's fairly easy to dial up usable tones for many styles.

"In our tests, we deemed that Vandal often felt slightly closer to a real amp than two of its esteemed competitors, Guitar Rig 4 and AmpliTube 3."

As for stompboxes, you can use up to four at once, and there's a fair range to choose from. They all have neat retro GUIs, too, with Magix promising more pedals in future updates. There are four overdrive/gain pedals, which cater for the sounds that Vandal is best at, from bluesy crunch to 'scooped' metal tones.

Moving on, there are three modulation pedals for guitar and one for bass; two types of delay (digital and a bucket-brigade emulation); three compressors, including one for bass; volume pedal; wah-wah; auto-wah; and two EQs.

The stompboxes are a bit of a mixed bag - we found the guitar compressor to be a decent enough replacement for something like an MXR Dynacomp, for example, whereas the Phaser/Tremolo seems tonally quite limited.

The studio effects at the end of the signal chain don't particularly distinguish themselves. Furthermore, you can only use two at once, so hard luck if you want overall compression, reverb and EQ, which is a perfectly standard combo.

There are no filters on the delays either, meaning they can build up and sound muddy. MIDI control was badly flawed in the initial release version of Vandal that we tested, but Magix is well aware of the issues and is working on a fix - in fact, the company let us try a work-in-progress beta and it was indeed much more well behaved, and also had some neat new features, such as mic delay knobs.

One very attractive facet of Vandal is that it's easy on your CPU. We thought Overloud's TH1 amp sim was a lightweight, but Vandal is even more so, and in comparing the two with similar amp/effects configurations, we could run around 50-60% more instances of Vandal before our computer choked. Impressive!

Also appealing is the simplicity of the GUI, with pretty much everything laid out right in front of you.

Vandal is a young product, but it already provides a good deal of tonal inspiration for recording. It's not for those who crave the look and feel of a big range of classic amps, but what it does provide is a highly realistic playing experience that should appeal to many of the axe-wielding population.

Listen to Vandal at work: