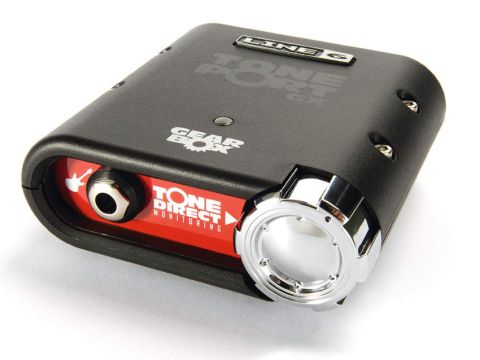 If you want amp simulations and effects on your computer for practice or recording, this is a quality package that won't break the bank. At just £57, it's a real bargain.

After firmly establishing its POD range of hardware amp simulators as a ubiquitous, industry standard of sorts, Line 6 now seems to be aiming to make its sounds accessible to the widest possible range of guitarists with the GearBox software.

The TonePort series is designed to work seamlessly with the GearBox software but the TonePort GX provides the most cost-effective entry of all into the world of Line 6 amp simulation, hardware or software.

The hardware is palm-sized and light thanks to its plastic outer shell. It´s designed to either sit on its four rubber feet on a table-top, or be attached to a guitar strap courtesy of a springy metal clip fixed to its under-surface. Whereas the other units in the TonePort range benefit from a variety of connections, the facilities here are cut to the bone with just the bare minimum for plugging a guitar into a computer and monitoring the sound; you plug in to a ¼ jack input on the front and monitor via a mini headphone jack at the rear. A large silver knob controls the headphone level.

Communication with your computer is via the supplied USB cable also plugged into the rear. The collection of software amp, effects and speaker models that you get here is roughly equivalent to the GearBox Plug-In Silver Bundle, but it works purely in an independent standalone mode rather than as a plug-in that can be inserted into an audio track of your recording software. This means that when you record you are actually recording the full guitar sound with amp simulation just like you would if using a hardware POD, rather than using the plug-in method whereby you record just the dry guitar sound with the option of adding a choice of amp simulation later.

Software installation is easy from the supplied disc and once done, the Gearbox software has a graphic interface that makes it blindingly obvious what is connected to what. You get instant access to a tuner and a whole bunch of preset sounds available from a drop-down menu. It´s dead easy to edit any of them with the mouse whether it´s just tweaking parameters or swapping amps, speakers and effects.

If you are using GearBox for practice there´s a phrase trainer into which you can load and loop audio for full- or half-speed playback. To keep your timing together there´s an eight-step programmable drum machine with kick, snare and hi-hat sounds or a plain metronome.

Recording to your audio software is simply carried out by designating the GX as the input source, choosing a sound and going for it. The GearBox ToneDirect monitoring system means you hear it as you play it with no latency delay problems.

The sounds on offer are typically Line 6 - decent quality and include more than enough variation.