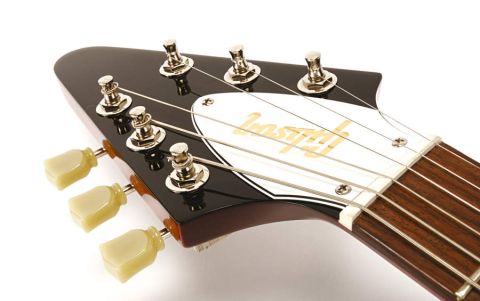 Flicks the Vs at its rivals.

Back in 1957, Leo Fender started telling anyone who'd listen that Gibson was stodgy and never had any new ideas. Gibson boss Ted McCarty took that as fighting talk, and promptly built the Flying V.

Don't be fooled by the suncream-sounding new name. The V-Factor X is essentially a 1967 Flying V with some of that model's more antiquated features ironed out for the new millennium.

Critically, the iconic mahogany body and arrow headstock of yore remain, while the replacing of the original PAFs with 496R (neck) and 500T (bridge) humbuckers suggests this old log has learned some new tricks.

Now 50 years old, the Flying V has lost none of its power to divide. But we're firmly in the 'classic' camp - we love the gonzoid looks, the no-nonsense hardware and the 50s/60s hybrid neck profile.

At the same time, it's quite heavy and very cumbersome, isn't easy to play sitting down and it doesn't fit in some guitar stands.

Luckily, plugging the V-Factor X into a Marshall is enough to make such quibbles evaporate. Under moderate distortion, the neck pickup has monster depth but retains sufficient bite for your blues solos to slice through the mix.

Over at the bridge, you've got a powerhouse sneer that sustains for ages and gobbles up lead work. There's mahogany warmth across the spectrum, perfect weight distribution and it makes you approximately 54 per cent more attractive to the opposite sex. Fact.

If guitars had a mid-life crisis, this one would be buying a Harley and wearing leather chaps. Its classic looks have been honed with some great new pickups that make it roar with power. Needless to say, it's still the daddy.