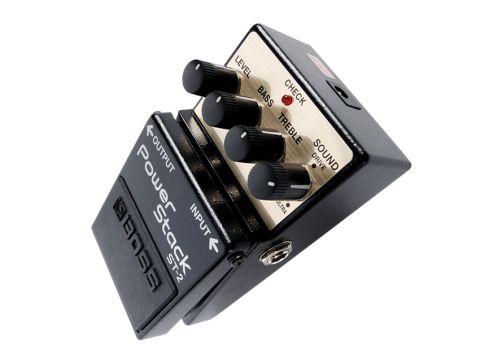 All in, the ST-2 is wholly professional and turns in a quality sound, but at £100, it's a purchase that won't stack up for everyone.

Let's hear it for hands: they pull the strings, fret the notes and throw the horns. But if all you do with your feet is tap out time, mount monitors and shoe the odd stage invader, then you're halving your body's potential to rock.

At this point, the more highbrow members of our readership will probably start muttering something about "favouring the organic break-up of valves" to "cheap outboard distortion". Their loss.

From the boutique-style units through to more affordable additions to your pedalboard, the modern pedalmarketplace is a fun-packed pick 'n' mix, where a rainbow of sexy and savage stompboxes jostle for the attention of our size 10s.

No sector is more seductive (or more saturated) than distortion. From the moment that Roger Mayer built his first fuzzbox for Jimmy Page back in 1963, distortion pedals have been part of our lives.

In 2011, there are so many models that stacking them up could recreate the Great Wall of China (possibly), which is cool, but also means it takes a special flavour of filth to get our attention and stop us going over to the multi-fx side.

If we were giving points for nostalgia, the Power Stack ST-2 would romp home: it's the same iconic Boss brickette from our garage days, and even now it feels incredibly roadworthy.

Still, £100 for a standalone, sole-purpose pedal is hardly an olde-world price, and the ST-2 needs to blitz its claims of "power akin to coveted tube amps and professional stacks".

Pedalboard junkies will be frustrated by the lack of true bypass, but the ST-2 gives a strong performance while the red LED glows.

In Boss tradition, the controls are perfunctory - just a Level dial and two-band EQ - and the one you'll focus on is the Sound shaper, which takes your gain by increments from vintage fuzz to modern grind.

We'd go along with Boss' claims that this pedal responds to picking intensity: stroke the strings and notes ring out clean, dig in and they break round the edges, and that's something we didn't get from all these pedals. It will suit expressive players, then, rather than robotic virtuosi.

As for tone, it's a non-committal thumbs-up. There's a killer performance at lower gain stages, with the ST-2 giving humbucker- equipped guitars that fat, frayed 'brown sound' of '60s Brit blues.

That said, the "ultra-high gain modern distortion" touted when you crank the dial hard clockwise isn't savage enough (and makes singlecoils scream like a bitch).