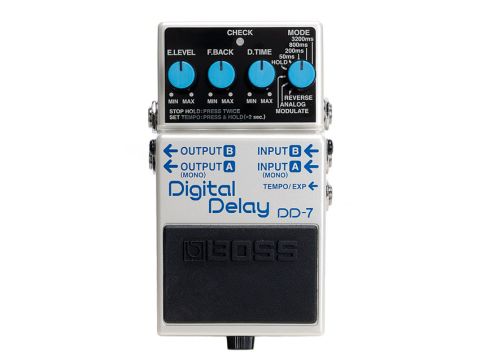 As a modern, jack-of-all-trades delay complete with trusty BOSS build quality, this ticks all the boxes - especially price.

Boss has produced the most widely used delay pedals in the world. These little white boxes are found in rigs at every level: from fledgling pub-giggers to stadium-filling music legends.

The latest evolution is the DD-7 which, according to Boss "takes some of the tried and tested features from its predecessors", and adds a few new tricks. These include an increased 6.4 seconds of delay time, Analog and Modulate modes, and a new Hold option.

The Hold option gives 40 seconds of recording time, which allows for some pretty out-there sound-on-sound delays. The analogue delay mode is well overdue in the DD series, and simulates the Japanese-built eighties favourite the DM-2, heralded for its warm tonality.

The modulation mode modulates the repeats for a chorus-like effect. In addition you get stereo ins and outs, but if you want to use tap tempo, you'll need an external switch. An external expression pedal will also enable you to change delay time, feedback and effect level on the fly.

Here are a few examples of the DD-7 in action. First, Analog mode:

The new delay modes are a brilliant addition the customary clean digital offerings we've come to expect from Boss. They're very easy to adjust, and the pedal doesn't mess with your basic tone.

Analog mode brings in warm thickness - previously absent from the DD series - which suits vintage-style sounds such as slap-back echo. The modulation mode brings to mind Bill Frisell-isms for which many players turn to the Electro Harmonix Memory Man Deluxe or, latterly, the Line 6 DL-4.

The Hold mode is a lot of fun: 40 seconds of loop time, which enables you to layer lick after lick into a massive swelling soundscape that can make you dizzy after a while. More usefully, you could play in a chord sequence and solo over the top