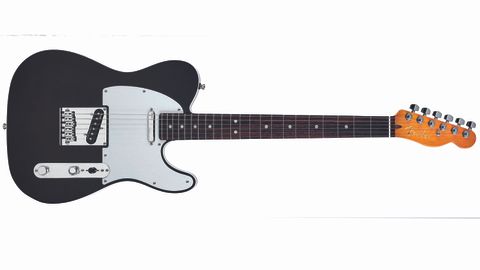 "The Ultra represents the most modernist vision of a Tele, with obvious refinements, yet still feels and sounds very ‘Fender’"

The 10 best Telecasters
The best Fender Teles you can buy, whatever your budget

You don’t want to stand still at Fender for too long or you might get refreshed or renamed. That’s what has happened to the relatively new American Elite series. This range replaced the American Deluxe series back in 2016, and has now had a name change, plus some altered features with it, although it remains the most modern series – or “advanced”, as Fender prefers to call it – in Fender’s production ranges, as with the previous Elite and Deluxe.

The outgoing Elite series consisted of five models: a Strat in SSS and HSS pickup configurations, a Tele and Tele Thinline, plus a lefty Strat. All were priced at £1,799, the Thinline Tele at £1,819. The new Ultra series swaps the Tele Thinline for a Jazzmaster and, at launch, there’s no sign of a left-handed model. As ever, each model comes in a wide range of new and more classic colours, and the maple or rosewood fingerboards are colour dependent. And, yes, the list prices move up a notch to £1,859 for the Strats and Tele, and to £1,959 for the Jazzmaster.
All include the same moulded cases we’ve seen with the American Professional range. Let’s dive deeper with the Tele...

This Texas Tea-finished Tele is quite the looker, particularly with its Silver Anodized (aluminium) scratchplate. Like the Strat, though, the ’plates are colour dependent with the option of single-ply Black (Butterscotch), three-ply Mint Green (Ultraburst and Mocha Burst), three-ply White (Arctic Pearl), three-ply Aged White (Cobra Blue) and three-ply Aged White Pearl (Plasma Red Burst). Alder is standard for the bodies; ash is used on the Plasma Red Burst and Butterscotch Blonde only.

As you’d expect, we get the same neck profile and the same additional heel shaping as our Strat. Along with that palm contour we also get a rib-cage cut, while the top edge is bound.

The bridge here is a modern Tele-style unit with six chromed brass block saddles. Like the Elites, both guitars include Schaller S-Lock strap buttons with the locking elements for your strap included in the case. Another note to modernism here is the Electrosocket jack mount, which is side-placed as usual.

The Ultra Noiseless bridge pickup has flat stagger poles that sit just above the cover. The neck pickup is suspended from the scratchplate (unlike an original that screws directly to the body), which means that height adjustment here is easy. Fender doesn’t mess with the switching options here, either: like the previous Elite wiring, we get one extra sound – both pickups in series.

Fender specs on the previous Elite necks are 20.8mm (.82 inches) at the 1st fret and 22.6mm (.89 inches) at the 12th fret. Our Tele measures 20.9mm and 22mm, which would indicate that little has changed, perhaps just a slightly fuller shoulder in lower positions.

If your idea of a ‘D’ shape neck is fairly flat-backed with square shoulders, that’s not what this feels like. It’s a relatively thin-depth but extremely comfortable with well- rounded fingerboard edges and a smart fret job from a wire gauge that falls into Fender’s medium jumbo category.

Some people can get pretty het up about quoted fingerboard radiuses, but while this doesn’t feel as rounded as vintage (184mm/7.25 inches), it’s on par with a host of more modern makers and really feels far from flat. Setups on both are very good and playability is therefore excellent, too.

Weight wise, this hits the right spot – a little lighter than the majority of Fenders we’ve played in the past couple of years. At 7.44lbs this Fender isn't feather-light, far from falling into the heavy category.

As to the flavour of the classic recipe this Tele represents, we certainly wouldn’t be sending it back to the chef. It’s interesting to consider, though, that of all the production models offered by Fender, this (and the Mexican Deluxes) are the only ones with hum-cancelling pickups. Clearly hum pick-up isn’t – in percentage terms – a huge problem for most. It’s certainly not a problem here and comparing to standard single coils, yes, they work. So is there a compromise?

It’s not the thickest vintage-y voice we’ve heard and the bridge has plenty of treble slice until you back off the tone a little (don’t forget it’s a no-load type, so effectively
with the control fully up it’s bypassed for maximum high-end).

It’s a lively guitar and that steely bridge voice seems happy in cliché country Tele territory or a more modern, crunchy and gained Nashville vibe. The neck captures that slightly softer attack to calm things down a little, the parallel mix is bouncy and accurate, while the series mix with the S-1 switch depressed adds thickness and a little volume while retaining some edge.

Many of us will be familiar with the four-way Tele selector switch, which does the same, but on this model the three-way feels more familiar and simply depressing that S-1 switch feels a little more intuitive.

The treble bleed keeps things clean as you pull back the volume, and the tone is wide ranging and nicely voiced. Swapping between this and our reference Teles, the neck feels noticeably thinner – in both depth and, oddly, width – but played for extended periods on its own, well, this one got more playtime than our Strat.
It’s a grown-up, vibrant Tele with some sophisticated voices and a very intuitive control setup – a different but very pleasurable drive compared with a big- necked, brutally simplistic vintage piece.

Each Fender production series has its own theme and style and, even if they were all priced the same, it’s not an easy thing to find your new Fender fit. The Ultra represents the most modernist vision of a Tele, with obvious refinements, yet still feel and sounds very ‘Fender’, stopping short of features such as stainless steel frets or roasted maple necks and the like.

The Modern D neck profile really isn’t far from the previous Elites’ neck shape, nor is it any ‘speedier’ due to its compound radius, which effectively centres on a Gibson-like 12-inch curve. You’re not going to get kicked out of your blues jam if you turn up with one of these, either. Rather they offer a different playing experience – better or worse? That depends on you.

MusicRadar verdict: The combination of good weight here, a neck heel that disappears and more subtle features such as the improved intonation of the bridge, the hum- free pickups, S-1 switching and well-voiced control circuits means that there’s very little to get in the way of creating the music you want to. We’d call it good guitar-making, rather than vintage-blinkered replication.