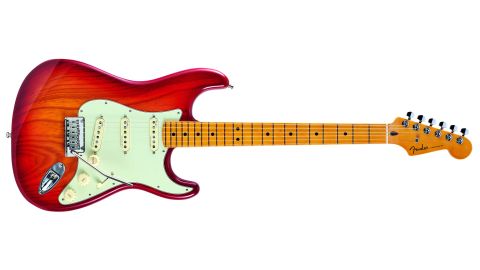 "These tools at your disposal add up to a really impressive and versatile Strat, and that’s the standard we’d expect for this money"

The 10 best Stratocasters
The best Fender Strats you can buy, whatever your budget

How does a guitar company innovate while protecting the very things people loved about its instruments in the first place? It can be a fine line – remember Gibson’s embrace of Robot Tuner models in 2015? Gibson probably wants to forget it too.

Fender is approaching things in a more measured way – creating regularly revised lines for its iconic models built in Mexican and Corona to suit different budgets and tastes. And looking at the specs across the American-made Ultra Series, it’s undoubtedly Fender’s most contemporary. Does that make it the pinnacle of what a modern Fender can be too?

In 2016 Fender launched the Elite Series, and the Ultras share a lot of the same traits. This series is essentially a refresh of the Elites with updates and refinements. And the features here are significant.

Combined, they suggest this is an instrument for people who play guitar a lot and need enhanced tonal versatility and comfort from their Fender. But that could just as well apply to any of us who can afford the entrance fee.

This Strat arguably benefits the most from that too. So let’s break down what we have here and how it adds up.

The neck profile here is a Modern-D – you may not heard of this before because the Ultras are the only Fender Series that has it. While the Elite had a C-D profile with 9.5"-14" radius, this is 10"-14". The idea is it gets flatter as you go up.

To us it doesn’t feel like a deep D profile and isn’t jarring if you’re used to a C-shape. The radius taper is also subtle and that nod to aiding comfort and speed is complemented at the back too.

There’s a sleek ‘Ultra Satin’ finish to the neck and the maple is nicely toned with bevelled edges to add a played-in familiarity to the buttery feel. Go up the neck and you’re in for a nice surprise.

The curved heel joint and contouring around it was seen on the Elite before and is something of a revolution for the Strat design. If you do spend time in the highest ranges of the fretboard this is a big selling point because it’s a real success for freer access.

Comparing our Ash American Ultra Strat to one of the alder models finds this to be a little heavier, but it’s about average for a Strat, weighing in at 8.2lbs, while the Plasma Red Burst is something Fender tested on a run of its Rarities series and it’s vibrantly delivered here.

The transparent reflection of the ash grain is certainly different and it won’t be to some traditionalist tastes, but then, that’s what the Ultra is all about to us.

Blending the neck adds a bottom-end presence that mellows the more trebly end of the Strat spectrum somewhat. The middle and bridge pickups here aren’t as spanky as some other ‘Vintage’ Strat single coils anyway, and the

Ultra Noiseless pickups (see above) have more contemporary fullness to their punch for us that makes them ideal for rockier, less bluesy territory too. They’re also as quiet as you’d realistically hope.

The volume control itself has a treble bleed capacitor to retain high end when rolling off – and Fender has even thought of including tactile soft touch rubber edges to the knobs here. It’s a great feature for any guitar and highly effective here – especially if you’re controlling gain to clean up from the instrument.

MusicRadar verdict: All these Ultra features tools at your disposal add up to a really impressive and versatile Strat, and that’s the standard we’d expect for this money. But the balance found here is harder to nail; this feels like that old familiar friend from Leo’s brilliant mind, given a very well considered modern overhaul. For that it lives up to the Ultra name.