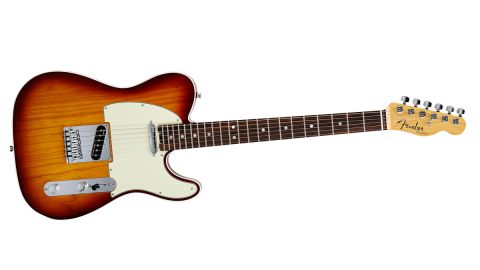 A very good guitar that die-hard Tele players could enjoy, too.

For 2016, Fender's American Deluxe range is no more; they are now Elite.

Name aside, the range is trimmed to just four guitars: the Strat and Tele, an HSS Shawbucker Strat and a thinline Tele. So, what's new?

Along with cosmetic additions in the form of new colours, a refreshed headstock logo and 'soft touch' rubber control knobs, there's a new neck shape, a new wheel-style truss-rod adjustment (we lose the Micro-Tilt adjustment) and slightly altered-shaped heel geometry.

Then we have the latest (fourth) generation of Noiseless pickups controlled, as before, by the S-1 switching, activated by a push/push switch within the top of the volume control's knob that expands the sounds from the five-way or three-way pickup selector switches.

If you've experienced the previous Deluxes, you'll know they're all about subtle upgrades, which are ongoing here. On the Elite Telecaster 226 with its classic-looking 'bursted finish and white top-edge binding, there's a classic 60s vibe that allows us to see a finely centre-joined slab of ash and a rib-cage contour round the back, which really works with that mint-green scratchplate.

The six-saddle bridge, with chrome-plated brass saddles, is fully adjustable and we have locking tuners - not really necessary without a vibrato, but they do make string changes fast. A classy, well-made piece, slightly lighter in weight, which, before we plug in, edges forward in our favour.

Okay, so the new neck shape is nothing too dramatic. The spec's C-to-D shape seems pretty subtle; as you move up the neck, the shoulders of the lower position's C shape seem to fill out slightly, giving a subtle flat back, more of a contemporary feel perhaps, which suits the compound radius and bigger frets.

The Tele is set up low with 0.009s, creating a pretty mainstream feel, but, of course, there's no 'right' way to set up your Fender. The important thing here is that the new truss-rod adjuster - as any Music Man owner will attest to - means neck-relief adjustments are now dead simple.

The Tele is a simple drive. With the S-1 switch out, it's standard bridge or neck pickup and both on in parallel. Depressing the S-1 switch with the selector in the middle position simply links the pickups in series for more output and a thicker tonality. The Tele's master tone is also a No-Load and fully up, there's a subtle click in the feel and it's effectively bypassed for maximum treble response.

The Tele immediately feels brighter and a little more open compared to our original '69, with high-end cut aplenty from the bridge pickup without too much midrange spike. The surprise is the neck pickup.

It's less clouded and soft: more like a good Strat, with plenty of attacking percussion. That makes the parallel mix brighter and more Strat-y, and the series link is a little less rounded in the highs, but still noticeably louder, darker and with plenty of lows.

Working in front of our laptop, or stuck close to your amp on a cramped 'stage', there is virtually no hum pickup whatsoever. At higher gains and volumes, however, you will hear some hum pickup, but in every scenario, it is way less than our standard single-coil guitars.

Fender provides choice, right across the price spectrum. If you want vintage spec, it's there; if you want more contemporary, no problem. It's the latter that the Elites aim for and, not least at the price, they cram in a lot of upgrades; and then there's the duality of the S-1 switching.

The Tele doesn't have the expansive sonic change of the Strat: the additional series linkage alone is hardly worth upgrading for, especially as you could mod your own Tele, but it's a charming guitar from its weight, look, great neck, improved playability of the compound 'board and frets, even that ribcage cut (not to mention the more Strat-like neck voice, or the intonation and locking tuners).