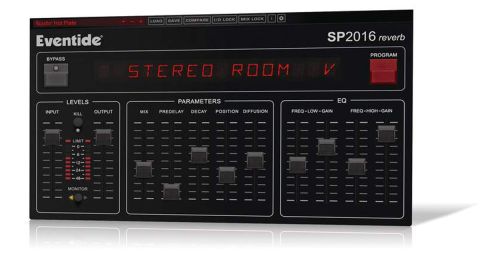 Three of Eventide’s finest algorithms prove as silky and seductive as ever in this stunning vintage-style reverb plugin.

That particular plugin was an emulation of the titular reverb algorithm from Eventide’s legendary SP2016 hardware, a 1980s classic with the distinction of being the world’s first programmable effects unit.

As you might expect, given its old-school nature, all of SP2016 Reverb’s controls are on the front panel, with no pop-outs or menus apart from the preset library (which is huge and includes ‘artist’ contributions from Dave Pensado, George Massenberg, Richard Devine and Sasha, amongst others). The Levels section handles I/O gains, and features the useful Kill button, which simply shuts down the input when activated, so you can hear the tail in isolation. At the top, the Mix and I/O Lock buttons render the dry/wet Mix and/or I/O levels immune to preset changes, for consistent auditioning.

The reverb itself is refreshingly light on parameters, with just four main sliders to get to grips with. Up to 999ms of Predelay can be dialled in, and beyond its essential role of maintaining clarity in the source material by making space for it before the reverb kicks in, the slider can also be pressed into service for short delay effects.

The Decay slider sets the reverb time (RT60) and runs from a peppy 200ms to an interminable 100s, while Diffusion affects the density of the tail by altering the ‘flatness’ of the surfaces making up the virtual space. The latter is one of the most subtle implementations of said parameter you’re likely to come across, but it can make a meaningful difference with transient-heavy material.

SP2016 Reverb’s six algorithms comprise the Room, Stereo Room and High-Density Plate of the original SP2016, and the ‘Modern’ versions of the same from 2016 Reverb.

Room and Stereo Room differ in that Room has a mono input and Stereo Room is, well, fully stereo. Which to choose will depend on the nature of your source signal and/or the space you want to place it in.

Plate emulates a heavy plate reverb (absolutely beautiful on drums and percussion). The Vintage version has no Position, Diffusion or EQ parameters.

The sonic differences between the Modern and Vintage algorithms are significant, with the former working at a higher bit-depth, and being noticeably brighter and more diffuse. The algorithms themselves have no bearing on the value ranges of the reverb parameters, so you can set the Predelay and Decay times and flick between algorithms to see which works best for the job at hand.

The Position control alters the balance of early and late reflections to simulate moving the source signal towards the front or back of the room. It has a profound effect on the character of the sound, making a dramatic difference in terms of the presence and envelope of the tail.

Lastly, high and low shelving EQ filters are onboard for non-surgical shaping of the tail, offering gain adjustment of up to -8 to +4dB cornering at 50-500Hz, and -8dB at 1-8kHz.

SP2016 Reverb is a flawless recreation of Eventide’s timeless hardware, in both its original and newer incarnations. Those smooth, expansive, natural-sounding tails still send shivers down the spine almost 40 years on, and while all three algorithms are particularly effective on drums, vocals and guitars, they’re worth trying on just about any sound.

As for 2016 Stereo Room, that’s still available for $199, but you’d be mad to not drop the extra $50 on the full enchilada, especially as that algorithm is “improved” here. Existing owners of 2016 Stereo Room or Anthology XI can crossgrade for $99.