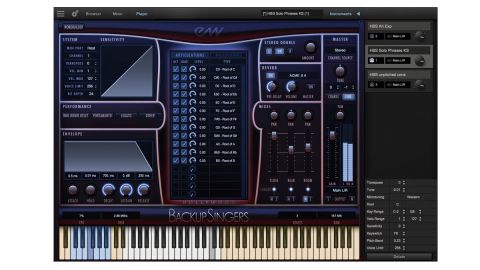 Building complex vocal arrangements is an enormously rewarding process. However, recording, editing and compiling the required vocal sessions can be an arduous and time-consuming task.

Thankfully, sampling giants EastWest/Quantum Leap and their resident production gurus Doug Rogers and Nick Phoenix feel your pain, and to that end have over the years built a number of libraries tailored precisely for this task.

Award-winning packages such as Symphonic Choirs and Hollywood Choirs have raised the bar for large group and choir sounds. Meanwhile the ‘Voices’ series provide solo or harmony voices with more targeted styles.

Their latest endeavour, Hollywood Backup Singers, sees the return of CC White, who featured on last year’s Voices Of Soul, and she is joined by Durga and Lorelei McBroom. All three are experienced performers with credits that include Pink Floyd, Lenny Kravitz and Jason Mraz.

Hollywood Backup Singers was recorded in Studio 3 at EastWest’s Sunset Boulevard base by Mark ‘Spike’ Stent and Chris Kahn using the Trident A Range desk. A vast array of classic mics were used and the vocals were captured from three positions: Close, Rear and Room.

The library uses EastWest’s Play instrument (AU, AAX, VST, Standalone) and supports Windows 7 or later and Mac OS X 10.7 or later, and is available as an individual purchase or as part of EW’s Composer Cloud Subscription.

Hollywood Backup Singers has a 9GB library that comprises 87 individual patches (Instruments). In addition to vowel and consonant patches, which were recorded in unison by all three singers, there are 588 recorded solo adlib phrases and 222 categorised preset WordBuilder phrases.

Core instrument patches are categorised by type – Vowels, Consonants and Solo Phrases – so if you’re after specific sounds such as ‘Ah’ or ‘Mm’ mapped across the keyboard, that’s where you’ll find them.

There are 13 ‘pitched’ consonant patches where the consonants are sung and mapped across the keyboard. There is also one ‘unpitched’ patch where individual sounds such as ‘k’ and ‘ch’ are mapped one per key. Vowel and consonant patches include two or three dynamic layers, controlled using the Modwheel (CC1), which is handy, while MIDI CC11 (Expression) controls volume.

The 12 Solo Phrases Instruments are grouped by root note and the modwheel switches between full phrase playback and the second half of the phrase only. This works really well when jamming on the keyboard and trying different phrases. The phrases themselves are lyric-free (ah, oo, yay and so on) and are soulful in style.

In the case of consonants and vowels the keyswitches simply change which sound is mapped across the keyboard. For solo phrases, the keyswitches select different banks of phrases. Throughout the patches there are also examples that have been processed via a Leslie speaker, which adds a panning chorus effect.

Hollywood Backup Singers is pretty easy to use and existing EW users will recognise the patch system and use of MIDI CCs to aid programming. What’s more the three mic positions – Close, Rear and Room – provide considerable tonal flexibility.

The close mic setting has a bright upfront sound and narrow stereo image, while the Rear option provides a dark, distant and very wide effect. The Room option, captured using three Neumann M50s in a Decca tree and a spaced pair of U67s, has a lovely rich stereo sound.

You can of course blend all three to taste or enhance things with Play’s excellent convolution Reverb. Meanwhile, on the mixer page, there’s further Instrument-specific effects including amp simulation, multiband dynamics, delay, ADT doubler and an excellent SSL channel strip and bus compressor.

WordBuilder (see above) is without a doubt one of the most powerful and attractive aspects of EW’s vocal libraries. Nevertheless, its success rests upon communicating how you want the words to sound, and digging into the Phonetic and Votox modes really helps.

A good starting point is to load one of the preset phrases, looking at how the various words are achieved. Beyond this, other tricks include repeating the vowel sound so that you can play mid-word note changes properly, or adjusting the consonant lengths so that words transition from one to the next properly.

It can be fiddly at times, but is still achievable if you think about the vocal phrasing rather than just the words.

The results don’t sound as human as the specially recorded solo adlibs; however, when used as backing vocals, which is the remit of the instrument, they can sound very good.

Overall, Hollywood Backup Singers is an excellent female backing vocal toolbox for pop, R&B and lighter rock tracks. It has lots of depth and via WordBuilder can create genuinely usable bespoke backing vocals.

It’s equally capable of delivering gorgeous pad style Ahs, Oos and beyond. And with well-programmed patches and a choice of mic positions, it sounds excellent and is great fun to use.

"For those of us that don’t have a trio of professional backing singers tucked in a corner of our studios waiting to be called (or the budget to hire them in), once mastered, HBS is a genuinely impressive software-based alternative."
Sound on Sound

"The options are quite extensive for something solely focused on background singers if you ask me and is easily among the most impressive I’ve experienced of its kind."
9to5Mac