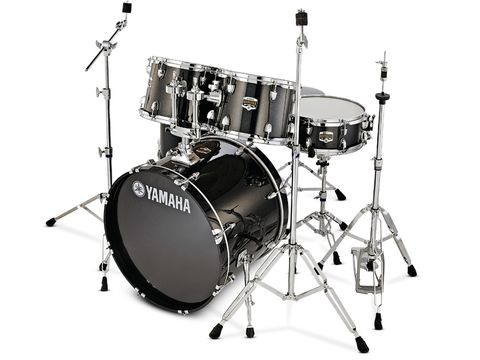 The Gigmaker kit encapsulates a lot of what makes Yamaha drums great but still manages to come in at a budget price.

The revamped kits are Chinese-made and feature a new set of snazzy wrap ﬁnishes.

Both options come with a 14"x5½" matching wooden snare and a set of Yamaha 600 series stands and pedal (the stool and boom stand pictured with the review kit are not included).

The striking Black Glitter ﬁnish of our review kit - one of ﬁve different shades exclusive to the Gigmaker - stands out immediately.

Yamaha has a way with details and the combination of the quality of the wrap with the neat, low-mass lugs suggests something more advanced than an entry-level kit.

This effect is further reinforced by the inclusion of a full size ball-and-socket tom holder and the double-braced stands. Wooden bass drum hoops also get the thumbs-up.

The shells are a mixture of poplar and basswood and are made with the usual care. Bearing edges are cut at 45°, with the snare drum having a sharper back-cut than the other drums.

In manufacturing the Gigmaker, Yamaha has managed to reduce formaldehyde content substantially. Formaldehyde is used in adhesives and is carcinogenic and also linked to allergies. The level of formaldehyde in this kit falls well below even the most stringent current standards.

We tested the kit at a gig with a punk band, which, although relatively brief in duration, was high-intensity and so a good test of how the drums coped in a full-on musical setting.

After nearly 40 minutes of frantic playing, the only hardware component that had moved was one of the telescopic inner tubes of the bass drum spurs, which required re-tightening with a drum key.

The bass drum itself is ﬁ tted with thin, single-ply heads that offer little in the way of control. Getting a deep note from the drum was straightforward, but without damping its sound was uninhibited.

Calming its response was achieved in the time-honoured manner of stowing a pillow inside, ensuring that it was in contact with both heads. Even so, the front head was still prone to boominess and a little external damping was also required.

Cutting a port would make such adjustments quicker and easier-- and investing in a pair of higher-spec heads would remove the need altogether - but the result arrived at was pretty decent. There was plenty of bottom-end on tap and the drum punched through with a fat, wet slap.

While experimenting with combinations of damping, some interesting sound variations came up. Completely undamped, the drum produced a timpani-sized 'bong', complete with a long decay, which could be exploited in some outré dance/hip hop/funk/jazz settings.

If the bass drum is shod with thin heads then the snare drum is the opposite, as its coated white batter head seemed impervious to stick marks.

Après-gig, while all the other drums bore clear evidence of being pounded at breakneck speed, the snare looked barely played.

At regular tunings the snare was crisp, if a little polite, with the thickness of the head inﬂuencing the sound, especially at lower dynamics.

However, cranking up the tension transformed the drum, sharpening the sound to a biting crack that sliced through anything within earshot.

Higher tunings seemed to dial out most of the head's sound too. Stick response was impressive, with the wires answering promptings from above almost to the edges.

The toms needed little in the way of intervention (just a little ﬁne-tuning) to get the best out of them. They reacted instantly to the sticks, but there was also a good degree of depth in their notes.

Power was available too, with a tribal tom riff played in one song being reproduced with throbbing results. The clean decay that was evident in all of the drums helped keep things distinct as well. Even the ﬂoor tom, with its basic allocation of 12 lugs, turned in an engaging performance.

Considering the standard of the hardware alone, the level of quality on offer is no small achievement. Yamaha's quality control is applied universally across all of its ranges and the drums look and feel like 'proper' drums.

To the get the best out of the kit will require an investment in better heads, however, particularly the bass drum - but Yamaha would rather put more resources into perfecting the drums at this pricepoint than the other way around.

An added bonus comes in the form of the kit's environmental credentials, too.