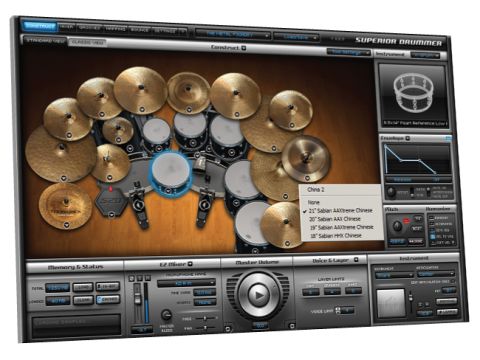 An outstanding collection suitable for many genres although it does help that the recording has been engineered with an aggressive sound in mind. The price is hard to argue with, and as an added bonus, the included MIDI holds particular educational value for aspiring metal drummers.

A decade after the release of their groundbreaking Drumkit From Hell sample library, Toontrack has rolled out The Metal Foundry, which is an SDX expansion pack for their Superior Drummer 2 drum software.

As with the original DFH, top metal producer Daniel Bergstrand engineered the recording, and Meshuggah drummer Tomas Haake played all the hits.

There are 12 kick drums, with five in matching left and right pairs, all played with plastic beaters. The software can alternate between right and left kicks with each hit, which is handy if you're playing via an electronic kit using a double pedal. Kicks include four Sonor Tomas Haake Custom models, a 24"x16" DW Collectors series, two Tamas and five Ludwigs, including two humungous 26"x14" efforts.

In the snare cupboard you'll find 14 drums, such as 14"x5" Pearl Free Floating Maple and Brass drums and a 13"x7" Tomas Haake Engineering snare. You can have up to five toms (three rack, two floor), with around eight kits' worth available.

The range of cymbals is extensive, with four rides, five sets of hats and 40 crashes/splashes/chinas, and there's even a cowbell too. Playing techniques include flams, sidestick, centre and edge playing on the snare, bell, bow and edge on the ride and tom rimshots.

Similarly mind-boggling is the array of mic channels in the mixer: two on the kick, five on the snare, four room ambience channels and a reverb chamber track. All are complete with bleed; for instance, play the snare drum and it'll come through the kick mic too.

With all the effort and expertise that has gone into this pack - not to mention the ridiculous amount of top-notch gear - it's unsurprising that it sounds superb. The kicks range from tight and clicky to thunderously boomy while most of the snares have a taut, resonant timbre that cuts through the mix (though there are a couple of gut-busting low-tuned affairs too).

The toms and cymbals are spot on as well. By disabling humanisation on certain kit elements, the exact same sample is triggered with every hit - totally unrealistic, but perfect for that rapid-fire 'triggered' kick sound! Further aiding the modern metal sound is the fact that you can turn down or even disable the mic bleed.

But if you're not a mix engineer, you'll appreciate the kit/mixer presets, many of which imitate big-name bands such as Iron Maiden, Pantera, Slipknot, Kiss, RATM, Slayer and so on.

Finally, there's a library of MIDI grooves performed by extreme metal heavyweights Dirk Verbeuren and Gene Hoglan - load them into your sequencer and you can see precisely how these two titans do their thing.