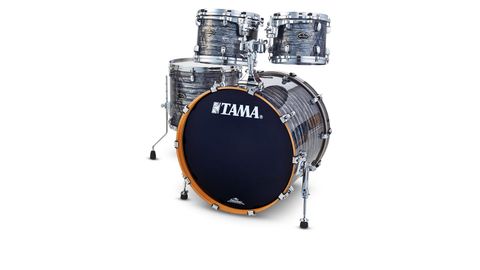 The list of Tama endorsees who rate the Starclassic Performer B/B verges on the encyclopaedic and it's not difficult to see why. It's a solid, pro-level kit that, at this price, is absurdly good value.

Prior to the arrival of the wallet-busting Tama Star series, Starclassic was the company's flagship range. Since then it has lost none of its pro credentials and is available in four different guises, with the Chinese-made Performer B/B being the most accessible.

For 2014, Tama has - in the face of rising costs - managed to drop the asking price of its entire Starclassic range by a considerable amount, making it even better value than ever before. This trend-bucking feat has been achieved through efficiency savings and a desire to take the fight to the competition.

Tama first experimented with hybrid birch and bubinga shells in 2006 when creating its innovative Starclassic Bubinga Omni-Tune line. Impressed with the African hardwood's qualities, Tama's designers set about combining it with a less expensive wood, figuring that it had enough character to shine through in a mixed shell.

Eventually they settled on the familiar drum staple birch and the B/B shell was born. This shell recipe remains unchanged, with the bubinga forming the three inner plies of each shell.

Toms are built with four outer plies of birch making a total thickness of 6mm, whilst bass drums feature an extra ply of birch and come in at 7mm. Optional snare drums - not featured in this review - follow the 8-ply sandwich of the bass drum.

The kit is available in two shellpacks though a wide choice of individual drums can be bought separately. For review Tama sent the smaller shellpack which is made up of a 22"x18" bass drum, 10"x8" and 12"x9" toms (mounted on the bass drum) and a 16"x14" floor tom.

A choice of six wrap and lacquer finishes is offered on an off-the-shelf basis, with nine other options (including sparkle lacquers) available to order. A further two limited edition kits in vintage maple and quilted bubinga are also being marketed in small numbers.

As with all the Tama kits we've encountered, the wood used is clearly high grade and the shells are well finished and accurately round. Peering through the clear heads, the dark hue of the inner plies of bubinga makes for a curiously exotic and inviting sight. Inside, the wood has been sanded perfectly smooth while the bearing edges are precisely cut at 45° with minimal rounding over.

The Charcoal Onyx wrap covering the exterior manages to be somehow both retro chic and slightly futuristic in its look. As if to echo this, the streamlined casing of Tama's MTH909 double tom holder resembles something from a sci-fi film from any period.

Concealed within the streamlined expanse of chrome is an extendable connection which slides the entire tom assembly backwards or forwards by up to 50mm. There is also a handy vertical telescopic adjustment which allows the height to be altered without having to loosen the main socket in the bass drum.

Tama's Star-Cast tom mounts attach to two extra eyes built into the die-cast rims. While this means that head changes can be undertaken without having to disturb the tom mount assembly, unhooking the tom from the tom post beforehand is essential to prevent the drum dropping onto the bass drum.

Generously proportioned bass drum claws, complete with reassuringly thick rubber gaskets are an obvious sign of quality, as are the heavy duty bass drum spurs. Smaller details, such as the air-cushioned floor tom legs and the way that the tension rods thread faultlessly into the lugs are equally impressive.

Though the kit is usually shod with clear single-ply Evans G1 heads, the review kit was sent with a set of twin-ply G2s on the toms and floor tom. To our ears though, these heads are perfectly suited to the birch/ bubinga shells. Bubinga is renowned for its bottom end and there is no shortage of this to be found in the toms.

We experiment with the 10" tom; for such a small drum it is capable of sounding remarkably deep - well beyond what you'd expect. Slackening the tuning across the rest of the toms finds them giving a convincing impression of a 12"/14"/18" configuration, admittedly at the expense of any decay.

With such prodigious bottom-end you might expect a certain wooliness or lack of definition to the toms, but paradoxically the reverse is true; the birch plies conspire to announce their arrival with a crispness that punctures the mix with ease (the die-cast hoops undoubtedly play a part in this too).

Tuned to a more conventional tension the toms remain irresistibly full and fat, with the depth of note covering a considerable spread of frequencies. The twin-ply heads ensure that decay is fairly swift, but the toms' sheer presence - sharp, punchy, yet warm, a little dark and sounding somehow bigger than they ought to - is undeniable.

Swapping the G2s for clear single-ply heads brings a slightly cleaner and woodier tone to the toms. They're a good deal more resonant, not as saturated, but still project with no little power. Cranking up the smaller tom reveals shades of timbale in its attack while the floor tom practically shudders in prolonged decay.

Single-ply heads probably give a more honest rendering of the drums' sound but, for our money, the G2s exploit the natural characteristics of the shells to great effect.

The bass drum is supplied with the listed single-ply Evans EQ4 batter and ebony front head, both of which feature dampening rings. Played wide open with both heads intact the twin influences of the bubinga and birch again blend into a seamless whole. While the note is cavernous, it is framed with birch-like clarity.

At 18", the length is also just right - it's deep and probing but never shapeless. Each stroke displaces a lot of air and the resulting decay feels warm and natural. We like the response so much that we don't even bother cutting a port or adding any dampening.

Tuned up, the drum loses some of the depth and darkness present in the note in favour of a more buoyant, eager sound. The decay also lengthens and we briefly consider the possibility of adding some dampening before tuning it back down to the sweet spot and playing on.