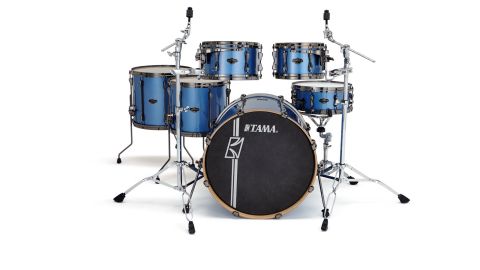 This kit has it all - great sound, excellent build quality and an incredible price; even at its full RRP this kit contradicts its comparatively meagre price tag.

Tama needs little introduction. The Star moniker was first aired way back in 1965 by parent company Hoshino Gakki Co. Some nine years later, the brand Tama (meaning 'jewel' in Japanese), followed and today Tama retains 'Star' for many of its kits.

Never one to rest on its success and reputation, this year Tama has unveiled plenty of new products and a wealth of new hardware and engineering enhancements.

Up for review is a large, comprehensive six-piece Custom Superstar Hyperdrive kit which, due in no small part to shell-length lugs, looks incredibly robust and gig-worthy.

Tama has provided an intriguing selection of sizes here too - from the tiny pint-pot suspended toms to a beefy bass drum the size of a small planet, it's a kit of contrasts.

The portly 22"x18" kick (a whopping 20"- deep model is also available), looks poised to offer an earth-shuddering bottom end, while the 10" and 12" diameter suspended toms (with a depth of just 61⁄2" and 7" respectively) and snare bite into the higher end of the sonic spectrum.

Finally, the pair of floors eagerly mop the mid to low tonal gaps left somewhere in between.

The comparatively shorter suspended tom depths offer an incredible set-up flexibility. Explains Tama, "Many drummers can struggle with not being able to get the toms low enough to the bass drum, while maintaining a sitting position that is comfortable."

In complete contrast, Tama has gone for more conventional sizes for the floor toms of 14"x12" and 16"x14".

In a departure from the birch/basswood shells of the old series (first introduced with little change to some finishes), since 2008 each drum in Tama's Superstar Hyperdrive series is now made from 100 percent maple.

This represents a significant upgrade for Tama's best-selling series. Another upgrade which is perhaps a little more visual than purely sonic is the Star-Cast suspension mounts which are similar to those found on Tama's Starclassic series.

Instead of the clumpy steel bracket of the former Superstar sets, this nickel plated die-cast mount smoothly and beautifully follows the contours of the counter hoops. The badge has also been redesigned and helps give a high-end feel to the kit while also being aesthetically pleasing.

With the exception of the bass drum, with its colour-matched wooden hoops, the other drums here are each fitted with the high-quality die-cast Star-Cast zinc counter hoops.

As well as those incredibly long black nickel lugs, the kick features recessed claws with protruding rubber gaskets which are designed to prevent the precious hardware scraping against the stage floor when packing away and setting up - a vulnerable time for drums.

Though the Sound Bridge high-tension lugs extend across the entire shell surface of each drum, they only make contact with the shell at either end where they are bolted firmly in position.

Each lug sports a gap of around 2mm to the underside - even the snare has similar bridged style to help avoid impeding shell vibration or unnecessarily putting strain on the shell.

For this series, Tama offers a huge selection of add-on drums, additional hardware and a wide choice of finishes. The Superstar range includes a choice of three floor tom sizes, three bass drums, five sizes of suspended toms and a selection of three snare drums.

Out of the many boxes most of the drums appear evenly tuned, though the pitch of the suspended toms seem a little too high for us. However, for now we are leaving well alone as the actual tone of both of these diminutive drums is superb.

Adjustments are made to the rear head of the kick by slackening a full turn. Oddly the smaller of the two floor toms is a little wrinkly at one edge and this is given half a turn at the offending edge.

The 16" floor is de-tuned slightly so the pitch interval between the four toms is a little more even. The Star-Cast die-cast hoops are unyielding - there's not the slightest hint of any of the flexing experienced with some thin triple-flanged models.

Some people say tuning with them can be unforgiving and problematic but this writer has never experienced any trouble with them and always found them to be consistent. Die-cast hoops do however, have a sound of their own, being much dryer and more focused than triple-flanged models.

Finding just the right angles on the suspended toms proves quick and accurate thanks to the resin ball clamps.

The shallow-depth does make for effortless ergonomic positioning and, if required they can be played virtually flat without being too high or knocking into the bass drum as has happened on occasions with my set-up.

When putting up the kit we notice the floor tom legs are just the right length to elevate the toms but they are short enough to remain attached to the toms when packed away in a snug drum case - nice.

The bass drum has height-adjustable spurs (via a drum key); they remain fully extended and angled so there's a good 50mm lift at the front from the stage floor.

The inclusion of internal dampening rings on the kick ensures the sound is pretty much optimised out of the box and, once the pitch has been lowered it delivers a punch capable of seismic devastation - it is thunderous.

One of the biggest surprises of this review is the superb sound from the snare drum. It has just the right level of attack while producing a wonderfully solid woody thwock - a terrific inclusion.

Just the slightest stick-tip tickle on those single-ply tom batters is enough for those drums to spring into life. The suspended models are incredibly fast with a lightning- quick response and a surprising level of attack, given we are talking maple here.

Playing with a wide range of sizes opens up a range of sonic possibilities - think of any drummer with a multi-tom set up. Phil Collins' 'In the Air Tonight'; virtually anything by Billy Cobham or Joey Jordison; Neil Peart, 'Spirit Of Radio' by Rush, etc.