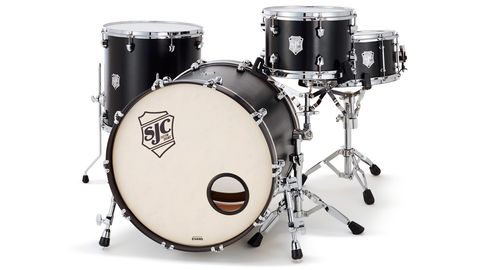 More great work from the team at SJC custom drums.

Since the company's inception in 2000, SJC has grown to become a well-recognised name within the drum world, forging a reputation as a youthful and alternative custom brand.

Having started life in the basement of the co-founding Ciprari brothers, SJC continues to produce high-end custom drums today at its workshop in Massachusetts, USA. Amassing an impressive roster of endorsing artists along the way, recent additions include Trè Cool (Green Day) and Jay Weinberg (Slipknot).

Deciding on just one small selection of shells has allowed SJC to produce the new Tour Series drum kit in bulk - reducing the price-point from that of its usual custom orders as a result. Usually SJC quotes a minimum turnaround of two months on any order and for those of us outside of the good ol' US of A, the addition of overseas shipping costs is sure to make the custom route an expensive option. That said, Essex-based retailer Sound Attak has been helping us Brits get our hands on a selection of SJC gear since 2004.

Although produced in bulk, the drums are still made in the same workshop, by the same craftsmen, using the same processes as in their bespoke drum builds. As a result, the shells should have gone through the same level of quality control expected of any SJC drum.

On its website, the company likes to remind us that, because we are dealing with pre-built shell packs, no size or specification changes are available without incurring additional costs.

Having recently taken on distribution of SJC drums in the UK and Europe, Gear4music is offering three basic shell pack configurations along with the individual snare on its website. The basic three-piece pack (as described above) goes for £1,699, while the additional 18" floor tom brings it to £2,189 (four-piece), and the 10" tom on top of that equals £2,599 (five-piece). The separate snare drum comes in at £545.

The Tour Series has been designed to be as versatile as possible. With this in mind, each drum is made from 100 percent American maple - 6-ply for the toms, 8-ply for the bass drum and 10-ply for the snare. The dimensions of the shells have also been chosen with versatility in mind. SJC co-founder Mike Ciprari explains how the 12", 16" and 22" combo is their most popular across the board when dealing with custom orders, which is exactly why they have been chosen for the Tour Series.

By the same token, the Black Satin Stain finish has been implemented with the intention to allow the kit to fit visually into any stylistic situation. Not necessarily 'plain' but certainly inoffensive.

The good news is though, it sure looks smart. Up close and personal, the paint has a coarse texture and is subtle enough that it is possible to see the grain of the maple. Further back though, the appearance is smooth, transforming into a dark matte black, particularly under stage lights.

Despite only one finish option, three choices of shell hardware are available; chrome (as review), brass and flat black. This incorporates at least a small element of customisation back into the equation, with each option giving the kit its own unique character.

Supplied hardware comprises the RIMS-style tom suspension bracket and standard floor tom legs. The bass drum also features heavy duty quick-adjust bass-drum spurs, all of which are matched to your chosen hardware colour option. Even the large low-profile shield badges which are affixed to each drum come in either black and chrome or black and brass, respective of the kit hardware.

Due to the style of the hooks used though, unfortunately there is no rubber layer in place to protect the wooden hoops against any marring from the metal. With caution exercised, this should not become a problem.

In addition to the pre-ported, beige-coloured Calftone reso, the bass drum is supplied with an EMAD 2 clear batter, while the rest of the kit features G2 coated batters, Genera resos for the toms and a snare-side 300 reso. The wafer thin heads on the bottom should allow the toms to resonate as freely as possible while the double-ply coated batter heads will offer a good level of attack and warmth.

It comes as little surprise that the Tour Series meets high standards all round, considering the existing level of SJC's build quality. All adorning hardware is impeccably designed and highly functional - easily suitable for a gigging or touring drummer.

The quick-adjust bass-drum spurs have just two angle settings which makes it super-quick to slot them securely into place. The spiked telescopic legs use regular wing-nuts as well, meaning no reaching for your drum key to adjust them. Even the brackets for the floor tom legs, which are engraved with the SJC shield logo, scream attention to detail.

The suspension bracket on the rack tom is sturdy and does not cause any trivial problems whilst hanging the drum from a tom arm. Often these can be pain to get right as you spend ages getting it exactly where you want it, tighten it in place, and then it moves as soon as you let go. Those of you that have ever used a Catalina Club kit will surely relate to the frustration of my ramblings.

As we can expect with maple shells, the drums are warm and resonant. Straight out of the box, the 8-ply bass drum is punchy and produces a hearty thump, even at lower dynamic levels. Tuned really low, there is no sign of the slappy-ness that is often present in other drums.

With a trusty bass drum pillow stuffed through the 5" port, the drum begins to sound even fatter, whilst maintaining a roundness to its sound. It feels very pleasing to dig the beater into and sounds simply immense no matter what we do to it.

The tubular 16"x16" floor tom seems so deep that we needn't set the legs up too high at all. Like the bass drum, also tuned incredibly low out of the box, the 16" drum gives off a mighty boom when struck enthusiastically at its centre. Tuned up a little, the sweet spot can be found at a mid- to low-pitch. That said, the drum seems comfortable within all tunings that we experiment with, proving its versatility.

The 12" rack tom shows itself to be equally as adaptable as its larger counterpart. Starting low down into real tub-thumping territory, the drum is pleasantly fast for its size and thunders away happily, in perfect harmony with the 16" floor tom.

In higher registers, the rack tom produces a very clean and sustained note, seeming like it could hold its own in any situation. It's a shame that we didn't get to check out the 10" tom, as it would very likely complement the core set-up greatly. Not to mention the inevitably earth-shattering 18" floor tom which we would also love to get our hands on.

The snare drum, despite its considerable depth, is amazingly responsive to softer strokes and has a fair snap when coaxed.  Its thick 10-ply maple shell produces a warm tonality, particularly when playing rim-shots, which is helped by its elongated body. Even so, helped by the double-ply coated head, there is a slight dryness to the sound which allows the snare wires to be very pronounced. The Trick throw-off is a nice touch and aids in finding the perfect balance between the bottom end of the snare wires and the liveliness of the tightly-cranked batter head.

The Tour Series ticks all the right boxes  as far as we're concerned, offering a highly usable kit across a wide cross-section of genres. Designed as, as SJC puts it, a "rugged, tour-ready kit that sounds great at rehearsal, on stage, and in the studio", it does pretty much as advertised.

There is no sign at all of expanding the series at this stage, but time will tell. Who knows, depending on its popularity among consumers, maybe we'll see a few other sizes added or maybe a new finish? An extra snare drum or two would be a cracking place to start.