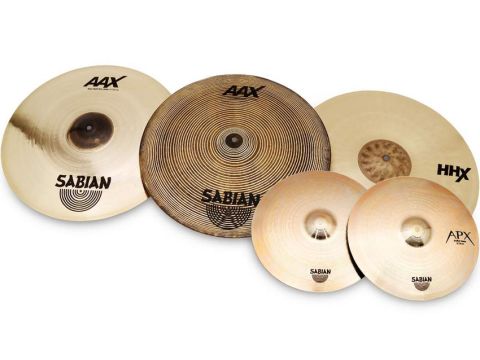 These are all modern, excellent cymbals, but just be wary of the manufacturer's descriptions, which can sometimes be a little misleading.

A mixed bunch here from Sabian, adding to previously well established categories. What they all have in common is the suffix 'X'. This is Sabian's code for 'modern'.

AAX is modern bright, while HHX is modern dark. APX is modern cut, ie: designed to cut through the loudest music. We have two rides from the AAX category and one from the HHX. The APX hats are rather different, made from B8 alloy rather than the usual professional B20.

All three rides are 21", an increasingly popular diameter. The medium-thin AAX Memphis is appreciably lighter than the other two and is the most striking looker with its smooth brown upper surface, hooped around with broad-blade, gleaming lathed bands.

The AAX Raw Bell Dry is fine lathed on top and polished to a gleam. Both cymbals have similar fine lathing beneath and 'raw', unlathed bells. The HHX Raw Bell Dry ride is more obviously hammered, with a heavily dimpled surface and natural satin finish.

"Half-opened, you'll extract a decent Bonzo 'Rock And Roll' intro out of this pair of Solid hats. Not at all shoddy, in other words"

While the rides are all cast from B20 bronze the APX Solid hats are pastry-cut from rolled sheet B8 bronze. This gives them a different colour, with slightly unusual orange-red glints. This 15" pair adds to the previously available 13" and 14" pairs. The term 'solid' indicates they are heavier than other APX models.

Despite being a traditionally hand-hammered cymbal, the HHX Raw Bell Dry is the most aggressive of the three rides. It has the sharpest pitch and the shortest, clearest stick response.

Sabian describes the sound as 'modern dark'. Well, it's certainly modern and dry, but to be honest we don't get 'dark'. To us the sound is abrasive and energetic. For dark, see the Memphis ride.

You can certainly crash-ride it, preferably with a heavy stick, but the crash is painfully loud. As is the bell, which is piercing. Yikes! we'd recommend it for rock/ metal or industrial-hybrid playing.

While dry is a worthy term for the HHX we wouldn't use it for the AAX Raw Bell Dry. It's really not that dry - on the contrary, it has a warm, mid-pitched body and a lush spread. Perhaps the 'dry' applies just to the raw, unlathed bell? Although it's not as aggressive as the HHX it is still a lively cymbal which lifts the music.

The AAX definition of 'modern bright' is certainly appropriate. As a crash-ride it retains good stick definition and we can see it working in virtually any style, including jazz. We gigged it a couple of times and found it most amenable. Despite being a large ride it didn't intrude on soft passages and it held its own when the going got tough.

The city of Memphis summons up memories of many legends of American music, from Booker T and Otis Redding to Wilson Pickett, Carl Perkins and Elvis. The implication is the Memphis ride will do you for soul, r'n'b, country and gospel. That's quite a list and thankfully this distinctive cymbal does a grand ole job.

It also falls into the AAX category, but is thinner (medium-thin) than the previous two rides and is consequently deeper in timbre. This is coupled with a smallish bell, which is part lathed and noticeably high-pitched, making a sharp contrast with the dark body of the cymbal. Absolutely made for a Latin-tinged rendition of Ray Charles' 'What'd I Say'.

Like the previous AAX it's a good all-rounder and an even better crash-ride, with a shorter, drier, jazzier crash. Sabian's B8 cymbals can be quite tinny and brash-sounding, but these Solid APX hats are nothing like earlier B8s, they're much smoother and refined in tone. For us, these are the first Sabian B8s which are comparable in musicality to the great B8s Paiste has made for decades.

B8 is generally viewed as less musical than B20, but it works extremely well for rock and electro styles - the whole raison d'être of Paiste's legendary 2002s - and the APX reminds us of these, if not exactly in tone then certainly in quality and playability.

APX is Sabian's range which is said to have the most modern cut. But, although heavy, these Solid hats are not so high pitched as to be brittle or harsh. Half opened you'll extract a decent Bonzo 'Rock And Roll' intro out of this pair. Not at all shoddy, in other words. These are 15s (there are already 13s and 14s) so expect a big, penetrating sound.