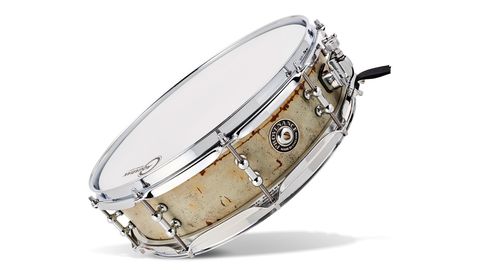 The ethos of Provenance is to build unique instruments from historically noteworthy reclaimed materials. This rusty VW 'Rat' may be the boldest experiment yet, but it sounds fantastic.

In his Essex workshop, Provenance's Tim Broughton takes reclaimed materials of fantastically varied provenance and fashions them into unrepeatable instruments.

So, for example, this eye-catching specimen is one of three snare drums Tim has knocked up out of the steel side-panel of a 1962 Volkswagen Type 2 van.

Yes, you read that right. In the past Tim has made snares from remnants of Brighton pier, a Rolls Royce Merlin engine and staves from a whisky barrel. His fans run from Evelyn Glennie and Cherisse Osei to Barriemore Barlow and Geoff Dunn.

Every snare Provenance builds is a one-off - and with wildly varied source materials the results are equally diverse. In the present case a rusting steel panel from a classic VW has been cut up to make three snares, 14"x8", 14"x51⁄2", and the 14"x4" we have on show.

The alluring shell has a sort of blue-ish grey weathered stone colour, but with small jagged fissures of rust. How bold is that? Tim says that he has "simply lacquered the rolled 45° bearing edges to prevent any further corrosion". This strikes us as optimistic. Run your finger along the rust and it is jagged and exposed and sooner or later, given our damp environment, it will surely progress.

We generally expect our metal snares to exhibit gleaming polished perfection. And Provenance is quite able to produce such a result. But in keeping with the
'rat rod' concept of un-slick build allied to top performance, here we have a decidedly weather-beaten 1962 VW panel.

A brash statement with a provocative edge - this isn't just a drum, it's a work of industrial art!

Anyway, before we get completely carried away, the shell feels perfectly solid, and though we doubt it will survive 100 years like an original Ludwig, neither is it going to crumble anytime soon!

So, the vibe is not glossy, but rather it's defiantly functional. There are slight bulges in the shell around the snare beds and the inner welded join. Looked at from directly above you can see places where the shell appears not exactly in parallel with the steel hoops. And yet measuring the shell across from lug to lug it is accurately round.

Bearing edges are also level and flat, with a not-too-sharp 45° turnover. No attempt is made to prettify the finish where the shell lip is formed and where the snare beds
are pushed in.

The circular Provenance badge has a chic design which finishes the drum off with a flourish. And underlining the rare boutique status, Provenance provides the snare with its own hard-fibre case.

There would be no point to this whole eccentric project if the drum sounded like a dog. How cool to report then that it sounded magnificent. The neat thing is that, having felt duty-bound to voice the above details about the eccentric construction, this is one of the best-sounding snare drums we've had to review. Simply sensational.

You know sometimes when you play a snare drum and it feels completely open, unfettered, responsive, ringy, snarey and just 'right'? Yep, that's this one.

The supplied Aquarian Texture Coated batter and Clear Resonant are sensitive choices. At all tunings from low to high the centre spot stays crunchy and crisp, never dull, while the edges also stay snarey. You can't ask for more. In fact the term crisp really says it. It's abundantly crisp, sharp and lively.

The fact the blackened interior has minor glitches and one huge scar seemingly makes no difference, as the drum is gloriously resonant. Rim shots are ferocious, which you expect with a shallow steel drum, but here they ring forever. The Gibraltar strainer is adequate, the on-off lever works easily enough, but the knob tightening the snare wires is stiff.

For a bit of reclaimed steel with generic hardware, Provenance's Rat snare is expensive. Its justification is that you are paying for a one-off, hand-crafted piece with singular looks. But the real saving grace is that it sounds killer.