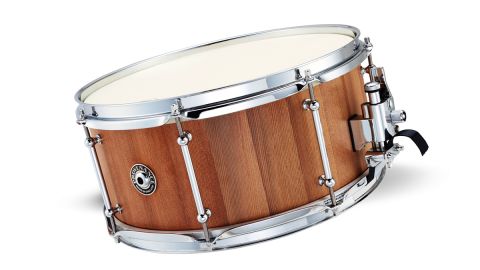 Yet another one-off work of loving, dedicated craftsmanship - it looks classy and plays beautifully, with a full warm tone.

This latest is hewn out of a decking plank from a former Radio Caroline ship. UK drummer Tim Broughton's Provenance drums are one-off collector's pieces that also sound and perform brilliantly as instruments.

The 14"x6.25" stave shell is of Alerce wood. Alerce is Spanish for larch, a slow growing semi-hardwood traditionally used for furniture and ship masts.

As a semi-hardwood, the stave construction makes sense: even though the shell ends up around a half-inch thick the drum is not that heavy.

The timber came from the deck of the MV Ross Revenge, built in 1960, the off-shore home of Radio Caroline from 1983 to 1991, since when she's been preserved and restored.

The Alerce's vertical straight grain is a sombre warm brown, the finish is natural, preserved with spirit wood grain sealer. Bearing edges are cut at 45 degrees then hand rounded and hand waxed.

The Alerce wood is not as heavy and dense as true hardwoods, and the bearing edges are rounded over, not sharpened, so the sound is not as aggressively hard-edged as some modern drums.

The shell is close on the full 14" in diameter, so the heads sit tightly. You have to push them down over the bearing edges, like some vintage drums.

The result is a dark and quite dry overall tone, and yet with lively rim shots and cross sticks. The result at medium tuning is rather Radio King-like. Great for loose, clanging jazzy rim-shots with a woody underlying timbre.

The warm Medium Coated Aquarian Vintage batter enhances the vintage vibe. The overall tone is deep yet concise; it's firm in the centre where it is quite thumpy and dry, though still crisp and snarey.

Tuned higher it's more brittle, sharp and cutting. But tuning right down low the shell tone comes into prominence with a powerfully resonant 'doinggg'.