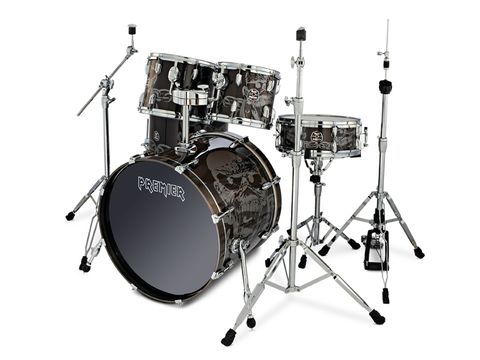 Whether you're a Maiden fan or not the Eddie graphics give this kit the sort of unique look that you'd expect to ﬁnd on a much more expensive kit.

It's ﬁtting that perhaps the greatest character in British rock drumming plays British Premier drums. Nicko McBrain has always had a touch of that pioneering swagger that made Keith Moon Premier's most illustrious son.

Since 1993 Nicko has played some fantastic Premier kits, and via Premier's agreement with Nicko you can, if you're seriously ﬂush, buy an exact replica of Nicko's drums, in a choice of the last six tour ﬁnishes. Wait till early next year though and you will be able to buy a more modest Nicko signature kit in maple. What we have here today though is an eminently affordable kit that has been adorned with Iron Maiden graphics under a separate agreement with the band. Hence 'Spirit Of Maiden'.

It's important to grasp this three-tier Nicko-Maiden arrangement since the Spirit is a birch-shelled kit (Nicko plays mostly maple), based on the budget APK series. The idea with this ﬁrst release is to keep the cost as low as possible and, to quote Premier: "to go with maple made it uncomfortably expensive for a graphic covered kit".

There is a thick-set Roklok double tom bracket and the toms are mounted in the old-fashioned way - directly clamped to the tom shells without isolation brackets. The 'L' arms slot into the receiving blocks and are held ﬁrmly by contoured memory locks. The design of Premier's big oval blocks is pleasing on the eye, and the ergonomically-shaped wing nuts with matt silver grip add further class.

The shells are APK Chinese birch, 6.6mm and 6-ply. The insides have a warm, light grain and are left lightly sealed with a hint of nap. Bearing edges are sharp 45° and ﬂat and all-in-all the shells are excellent at the price.

Toms and snare have single-ply UK Coated batter heads, made by Remo in China, with clear resonants. The bass drum has the usual clear batter with perimeter damping ring while the front head is a full ebony head with the Premier logo in Iron Maiden's own font. This lends the kit the same appearance as Nicko's tour kits.

Of course the big selling point is the wrap ﬁnish with artwork that depicts the band's famous mascot Eddie from the 1983 Piece Of Mind album. This was the ﬁrst Maiden album that Nicko was let loose on. The wrap is ﬁnished in a two-tone metallic grey and silver, and is produced in the UK at the same facility used for Nicko's personal tour kits. Each drum has an embossed silver-over-black Iron Maiden badge with 'Premier', small and in red, again in the Maiden style.

APK-style single-ended lugs are set on thin rubber gaskets. Now these lugs are rather large and lead to the one design glitch we encountered - which was that by having a double row of lugs on the 5½" deep snare, precious little clearance is left for the metal hoops. So as you tighten down the batter (or the resonant) head, the hoop ears come perilously close to engaging with the tops of the lugs. Perhaps a 6" deep snare would work better, allowing just that extra bit of clearance?

The kit comes with tom mount and ﬂoor tom legs, but you will need stands and pedals - and Premier recommends the new 3000 series.

As explained above, the Spirit is a Chinese-built birch-shelled APK. The simple reason for this is that Premier wanted to keep the cost right down and birch is a bit cheaper to obtain than maple. Thus Premier based the kit on the birch APK and not the maple XPK.

In the end it matters little. Too much is made of wood type, especially at this level. Shell dimensions, head type and tuning all have a greater impact on your sound than choice of birch or maple. Having said that, birch is often characterised as bestowing a tight and focused sound and we deﬁnitely got that vibe from this kit. The ﬁve drums balance well together - they resonate just enough in a controlled, sympathetic manner.

That extra inch of depth in the power toms does make a difference, giving a slightly lower fundamental and a smidgeon more body. Power toms are a nod towards the 1980s, which is when Piece Of Mind was released. Combined with the coated Remo batters you get a bright but dense response, Ambassador-style, which is industry standard and reassuringly solid.

Tuning is smooth, the lug bolts seem well-machined so that you can try out different pitches quickly and positively. The extra depth of the toms allows you to tune a fraction higher, like Nicko, without losing any fatness of tone. We have no problem with the direct tom mounting. You may sacriﬁce a tiny bit of resonance as compared with an ISO mount, but many drummers damp that out with a slither of tape or a slice of Moongel in any case. We prefer the old-school way that direct mounting leads to a mingling of tom and bass drum ambience.

It warms the sound and makes for a more integrated instrument. The 22"x18" bass drum has the now-standard Powerstroke-style single-ply clear head with perimeter damping ring. No way were we going to cut a hole in that ebony front logo head, though inevitably and understandably many owners will. We just attached a pedal and went at it with a felt beater, eliciting a really impactful slap and crack. And as with the toms this is followed by a pleasingly beefy presence.

The neat side-lever snare strainer has a thoughtfully shaped rubber knob throw-off. It is positive and quiet. The snare has a precise tone, crisp and yet quite dark and fairly abrupt in the centre. Once again, we happily played it without any damping, there being just enough ping on the rim shots and cross-sticks without it spiralling beyond control or producing nasty overtones.