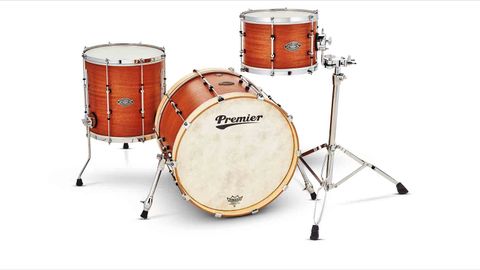 The first collaboration of Steve White and Keith Keough comes up trumps, with shells that should win awards and a correspondingly wicked sound.

Modern Classic heralds the return of popular UK star Steve White to the Premier fold. Steve's role with Premier is not just as a revered drummer, but also as head of the education programme and a member of Premier's research and development team.

The last time Steve worked with the company was in 2001, and his drumming philosophy and historical knowledge had an immediate effect with the Modern Classic snare drums.

Since then Premier has taken on the considerable talent of UK drum-maker Keith Keough to produce its high-end drums in Lancashire. Keith's team currently consists of four artisans: head of manufacturing and R&D Keith is assisted by right-hand man Tim Boyle, shell maker Duncan Tawse and Chris Harwood, who assembles, packages and ships.

Keith and Steve White go way back and the two drum nuts have put their heads together to take the Classic concept several stages further. Keith says,

Modern Classics are high-end drums that are entirely hand-built in the UK. At present there is a choice of three shell packs, each consisting of three drums. Here we're looking at the Bebop 20, which has a 12"x8" rack tom and 14"x14" floor tom coupled with a 20"x14" bass drum.

Finish-wise you get mahogany or birdseye maple. Premier sent us the Bebop 20 with the mahogany finish, while the bass drum has wooden hoops in contrasting maple. Both the mahogany and maple are sanded to a smooth semi-matt natural finish rather than high gloss, and protected with a satin oil.

All veneers are sustainably sourced from FSC (Forest Stewardship Council) certified suppliers, and Premier adds that finishes are limited runs and will change "seasonally in accordance with market trend".

Retro styles are fashionable with many companies, but the Modern Classic goes further: ultra-thin shells, short tube lugs and, most unusually, flat hoops with tension clips. It's a look that was last hip in the '30s.

But there are sound reasons for all this. First is the shells, which combine birch and African mahogany and are spectacularly good. Hand-built in the factory, the toms are eight-ply yet only 4.5mm thick, while the bass drums are 11-ply yet just 6mm thick.

That is really thin, and you might expect that shells this thin would require reinforcing rings, but Keith explains that "modern glues allow us to build thinner shells without the need for re-rings".

Removing the heads and gently squeezing the shells, we were amazed how stable they remained. They barely gave a millimetre, which we put down to the large number of extremely thin cross-plies bonded with high-tech glue.

Not only that but they turned out to be the most accurately circular of shells, to within less than 1/32", which is probably a record and should win awards.

Such thin shells hark back to pre-rock days, when drummers wanted ultra-light drums to carry around on public transport, and before the advent of the massive hardware that prompted drum builders to bulk up their plies.

While the heads are off we can inspect the bearing edges. These are cut at a more gentle 30° than the standard 45°, and are rounded over with a partially flattened top - clean but not too sharp. As with everything else they are finished with the utmost care, and are sensually smooth to run your finger round.

The shell fittings are key to the retro look. Having crafted such thin shells, Premier wanted to do everything to allow them to resonate. So there are short tube lugs made in the UK from solid brass, chromed and mounted on modern isolating gaskets.

These require claw-clips to hold the tension rods, again a delightfully proportioned low-mass design made from bronze, while the tension rods have steel and nylon washers.

The small toms have a mounting block for clamping to a stand, although you could just stick them on a snare stand. The floor toms have Premier's usual three legs and mounting blocks with contoured memory locks.

Premier drums are traditionally made from top-grade Finnish birch and, for a period in the '70s, from African mahogany. So why combine the two woods in these new hybrid shells? Keith Keough explains,

"The birch has a direct, clean sound while the mahogany calms the birch down just enough and adds warmth to the birch tones without making it sound muddy like maple or 100 percent mahogany." So, mahogany for a darker timbre and birch for focus - sounds like a smart pairing.

The idea of the lower profile 30°, almost-rounded edges is also to pass on a bit more shell tone. The combined effect is to get the best of both shell and head. With any drum there is always plenty of head sound, but here you really feel the connection between head and shell with minimum interference in between.

Not having played a flat-hooped tom for as long as we could remember, this effect hadn't occurred to us before - but now we're fans.

Turning to the whole kits, we have a classically proportioned 20"x14", 12"x8" and 14"x14". The 12"x8" and 14"x14" toms are well-rounded in character, suiting mid to higher tunings and a jazzy-funk approach. With superb bearing edges and exceptionally circular shells, accurate tuning of all the drums is quick and easy.

Although not flanged or cast, the flat hoops are sufficiently strong and weighty at 5mm gauge to hold the tuning. They probably won't be tested by the heaviest of metal hitters, but all the drums are fitted with nylon lug locks just in case.

Because of the thick gauge and the rounding over of the steel they won't immediately chop your sticks if you catch the rims, and there's only the slightest chance of fouling your fancy stick work on the tension clips.

As for the bass drum, we have to repeat our favourite mantra: 14" deep bass drums are slowly but inevitably returning. And here is the perfect endorsement: such a crisp, almost hard slam is wholly typical of a narrow 14" drum. Fitting the front heads with Fibreskyn-3 FAs (Fibreskyn Ambassador weight) makes the sound warm and dry, adding yet more depth.