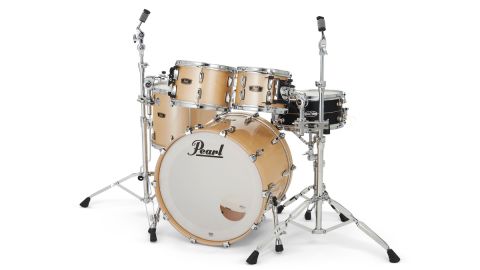 Pearl's original Wood- Fiberglass shell was a genuine classic and this excellent, timely update with Kapur shells comes at a knock-down price.

Pearl's fibreglass and wood/fibreglass-shell kits of the early 1970s were cutting edge and successful.

At a time when amplification was still relatively crude, the loud fibreglass drums were handy. In the spirit pervading the whole industry today, Pearl has decided now is a good time to revamp those fondly remembered kits.

The run is limited, and by restricting the shell-pack options and colours Pearl again manages to offer a professional set at an upper-budget price. Accompanying the kit, the Hybrid Exotic snare drum is a more complicated instrument and more expensive, as we shall see.

Pearl's 1972 catalogue describes the Artist Series as 3/16" of 100 percent fibreglass and the Professional Series as 9-ply wood with a 1/32" layer of fibreglass on the inside. The 2015 Hybrid-Fiberglass has 7-ply, 7.5mm-thick shells, made up of two outer plies of poplar, encircling six plies of dark, hard Kapur wood, lined inside with a thin fibreglass mesh.

The review kit, which is 22"x16", 10"x7", 12"x8" and 16"x14", is offered in two colour options - the rich and interestingly grained Satin Cocoa Burst, or the Platinum Mist (seen here), which we found rather anaemic due to the absence of figured grain in the outer poplar wood. It should look smart under lights though.

Inside the toms you find the thick dark Kapur rising via a smooth 45° shelf to the sharp bearing edge, which sits astride the twin outer plies of poplar. Leaving the briefest of counter cuts to the outer shell.

The edges are level and of an exceptionally high standard as we expect from Pearl. The bass drum edges are rounded rather than sharp.

As is standard with Pearl, the insides reveal a long scarf joint, a refreshing change from the butt joins of most other manufacturers. The fibreglass is just the thinnest mesh lining, sort of like a glued net curtain, leaving a hard but textured feel.

The two small toms have four-point secured OptiMount brackets which are super-stable, but don't half bunk up the weight. Shame Pearl didn't go wholly retro and dig out the classic 1970s bass drum mounts and posts.

There is no equivalent bargain snare drum, but Pearl has released a suitable partner as pictured here. This is the new 14"x61⁄2" Hybrid Exotic snare which has 100 percent 6-ply 7.5mm Kapur (ie: no poplar) shell, but with the same fibreglass lining.

There are 14"x5" and 14"x8" alternatives and the Hybrid Exotic Series also includes drums with shells of Cast Aluminium and 'VectorCast' (spun composite filament and resin thread).

Although the snare doesn't match in colour - it's a rich Ebony Lacquer with a pearl inlay - the contrast works well. It's pricier, but you get a lot for your money.

There's the snazzy SR-1000 snare strainer and butt for starters. Plus 20 STL-100 button lugs with Spin-Tight tension bolts. The latter have an internal locking expansion rod which prevents the bolt working loose with heavy rim-shotting once you have tensioned it to the desired pitch.

If you look closely at the square end of the tension rod there is a red-topped Allen-key operated insert. Of all the many solutions to loss of tension this may be the most elegant. Just don't lose your special tension key.

The SR-100 snare throw-off and strainer has a chubby build with the securest of lock-over levers, complete with locking button. Snare wire tension is adjusted from the butt-end which also has a locking nut. It's all heavy-duty, yet doesn't feel excessive, rather it is smoothly effective and reassuring.

The toms came fitted with Clear Pinstripes (another period touch) which seem to be just the ticket. Maybe it was the way they had been tuned pretty low, but the fat slappy attack took me right back to the 1980s. Dark with a thick assault plus a rich and deep tone.

On all the toms this richness seemed to result from the successful marriage of the clarity and sharp edge provided by the hardened fibreglass, with the added warm and deep timbral complexity of the Kapur.

However, with the bass drum this did not seem to work out so well. Our favoured descriptions of powerful bass drum sounds usually involve 'blam', 'slam' or 'thud'. This one is a thud - there's a hard edge that makes it sharp in the attack.

We stood just in front and got someone to stamp on it once as hard as possible and it really was a cannon blast. If we wore a toupee it would be sailing in the wind. Really, it was quite a shock.

What was missing though was much sense of tone or sustain - the sound was a relatively short smack. The properties of clarity and punch are exaggerated for sure, but it felt slightly bland. The sort of comment that is sometimes levelled against synthetic drums.

Some joy was had by tuning the batter to just above wrinkles and then progressively tightening the front head to increase the resonance.

Then the drum became more characterful, but we were still left with a nagging frustration - where the toms had the punch and clarity but with added dark timbre, the bass drum, being so much bigger, had the former and not the latter. Not enough flavour of Kapur. If I had a spare Pinstripe I should try that, as on the toms, instead of the ubiquitous Powerstroke-3.

Anyway, we don't want to make too much of this. If you want a loud yet focused kit, this is a good choice. And that focus also gives it sensitivity - it's sharp and refined. Your head choice and tuning will make a big difference though.

As for the snare drum, it's splendid. The hard fibreglass lining gives it an extra sharpness, precision and sensitivity which are all pluses for your snare work. The 100 percent Kapur gives it warmth and flavour.

Throw-off and butt tensioner are superbly engineered and easy to manipulate. Those Spin-Tight lugs seem to work fine. We were not in a position to thrash 10 shades of hell out of the drum, to find just how much brutality it takes to loosen them, but we suspect it's enough to satisfy most head-bangers.