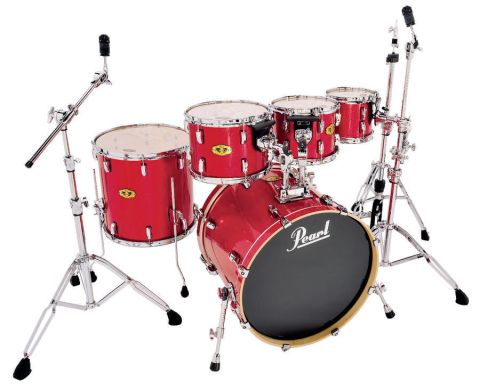 Pearl may have taken time over the introduction of the Vision Series, but the results are definitely worth the wait. Of the two kits, the maple VMX is unsurprisingly the more versatile and musical, but both give impressive performances.

Pearl's Vision series is the eagerly anticipated successor to its legendary Export series. Aiming to offer the same winning combination of quality and affordability, Pearl clearly hopes that the Vision will also emulate the extraordinary success of the Export.

Featuring a range of drum kits spread over four levels of specification and price, the Vision series strays further into semi-pro territory than the Export ever did. Pearl has sent us examples of two types of Vision kit for review, a blended birch VSX and a range-topping all-maple VMX set.

Replacing what's as close to a household name as a drum kit can be is a massive undertaking and Pearl has opted to do it in two stages. The first Vision kit made its debut in 2007, while the last of the Export kits was still in production. This overlap allowed Pearl to introduce the new kit alongside the established one and also gave it time to prepare a new factory in China for dedicated production of Vision kits.

The original Vision VLX kit is now discontinued and the complete Vision series, which was officially launched at the 2008 NAMM and Frankfurt music fairs, is divided into sub-ranges.

The VX kits are the starting point of the range and have birch/basswood composite shells with a selection of standard wraps. Moving up a notch, we have VSX kits - featuring the same birch/basswood shells fitted with a choice of more exotic wraps, including a limited edition pinstripe finish that recalls an American hot rod. The next two levels of Vision kit are both based around single-wood shells and have pretensions of being proper semi-pro kits.

VBX kits are 100 percent birch and are offered in nine different configurations with a choice of five glossy lacquer finishes. Above the VBXs come the all-maple VMX kits, which are available in a similar number of shell-pack and lacquer options.

The price of a standard five-piece Vision kit varies across the range: VX kits retail at £705, VSX at £800, VBX at £890 and VMX at £855 (four-piece kits are available in VBX and VMX at £845 and £815 respectively). VBX kits are more expensive than their VMX equivalents because they, along with the VX and VSX kits, come with a 900 series hardware pack as standard. VMX kits don't include a hardware pack and the obvious conclusion to draw is that the price of the wood used (maple) is the preventing cause.

However, manufacturing costs play a big part. While the VX, VSX and VBX kits are products of the new Chinese factory, VMX kits are made alongside Pearl Masters kits in Taiwan, where labour costs are higher.

The two kits Pearl sent for review aren't quite standard, being one drum short in one case and having one drum extra in the other. The supplied VSX kit consists of a 12"x9" rack tom, 16"x16" floor tom, 22"x18" bass drum and a 14"x5 1/2" steel SensiTone snare. This configuration isn't offered as a ready-made kit and if bought as a set of individual drums would cost £835 (according to the Pearl price list) without a hardware pack. In fact, it's a five-piece kit (with hardware pack), retailing at £800, from which the 13" tom has been deliberately omitted.

While the two kits are manufactured in different countries using different woods, the shells are created using the same method. They're divided into one of two ply variations according to their size. Rack toms are six plies and 7 1/2mm thick, while floor toms and bass drums are eight plies and 10mm thick.

Pearl reckons that lower frequencies require greater energy to project equally alongside smaller drums, thus the extra plies on the bass drums and floor toms. The success of the Reference Series, which first incorporated this kind of designated shell thickness according to diameter theory, would indicate that it's largely right.

Interestingly, the VMX maple snare drum is made to the thinner six-ply, 7 1/2mm specification. Wooden snare drums often - but not always - feature extra plies in order to increase attack, so the VMX snare is more likely to possess an open, playable nature.

Comparing the VSX and VMX shells side by side, the only discernible difference between them is in the colour of the wood. The dark hues of the VMX maple contrast with the altogether lighter birch blend of the VSX drums. According to Pearl UK's main man Mark De Cloedt, birch forms the core of the VSX shells, with clean-grained basswood being used on the inner ply.

One really nice touch is that every piece of shell hardware that protrudes inside the shells - such as bolts, washers and brackets - is finished in black. It's the sort of detail that doesn't register immediately, but, once noted, your eye is drawn to it repeatedly. The bearing edges are cut at 45 degree and are commendably sharp.

Assembling the kits, it's obvious that a lot of wood has gone into them. The effect is particularly noticeable with the bass drums and floor toms, where the hefty shell thickness of 10mm is hard to miss. While thicker shells aren't always capable of the same degree of tonal subtlety as thinner shells, they do feel strikingly solid, which can only be a good thing.

Externally, the shells are dressed in what look like identical fittings, but small differences separate the ranges. The bridge-type lugs, modelled on those from the Reference series, are bolted directly to the shells of the VSX drums, while the VMX's enjoy the luxury of a rubber gasket sandwiched between the wood and metal. VMX drums also fare much better in the bass drum spur and floor tom leg departments - being fitted with Masters-grade examples, as opposed to Reference on the VSX.

The Red Sparkle lacquer finish that graces the VMX is of the highest quality and wouldn't look out of place on a kit costing much more. Alongside it, the Black Sparkle wrap of the VSX kit can't help but look a little subdued, but is equally well finished.

Testing two variants of the same kit alongside each other is a rare treat. We assembled the drums into one giant and faintly ludicrous (though tame by Mike Portnoy standards) kit, divided down the middle into its separate constituents. Putting the two set of drums together like this clearly illustrated the different characteristics of the woods.

Kicking off with the bass drums, the fitted Pearl ProTone clear batter and ebony front heads both included substantial muffle rings. In the case of the birch/basswood VSX drum, that was virtually all that was required in the way of dampening. It gave an immediate and punchy response, with a typical birch-like note that carried well.

A tad more dampening gave it an even more focused sound. In contrast, the maple VMX kick needed careful muffling to calm it, but it provided a deeper and more saturated note. What it lacked in aggression it made up for in sheer depth.

In keeping with the VSX bass drum, the VSX toms displayed strong birch-like tendencies, giving a throaty and powerful performance. The clean nature of birch contributed to their presence and the twin-ply ProTone batter heads didn't stifle their edge. They'd have little trouble cutting across loud and busy situations.

The VMX toms were quite different, being warmer and smoother in comparison. Fat, juicy notes were the order of the day and the three racks and single floor tom blended so harmoniously, we needed to remind ourselves that we were playing a mass-produced kit. Though they didn't have the same degree of power as the VSX toms, they proved to be the more musical of the two sets.

Turning to the snare drums, the 14"x5 1/2" steel SensiTone snare supplied with the VSX kit was the sharper of the two, giving a hard-edged crunch. If anything, it was a little 'boxy', particularly when hit dead centre, but it carried an extra oomph that meant it sliced through with gusto.

The 14"x5 1/2" matching maple VMX snare was crisper and sweeter, with a warm, rounded voice. It was far more sensitive and therefore better suited to gentler playing. Higher up the dynamic scale it still cut through though, and when rimshotted it delivered just the right amount metallic ring.