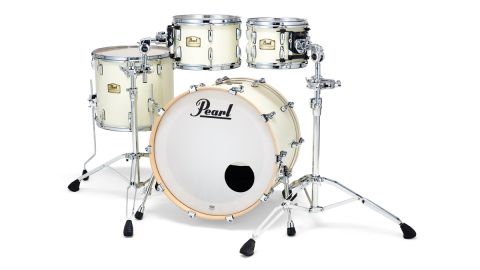 Pearl offers a decent amount of bang for your buck with the SSC. With a highly versatile tuning range and a crisp attack, this kit promises to be a strong contender in the mid-range market.

Based on the original mid-level Session Series first seen in 1993, the Session Studio Classic (SSC) was released in 2012 over in the United States and is now being re-released for the European market.

The configuration which we have received for review has a slightly larger 22"x16" bass and a 16"x14" floor tom, though the rack toms remain the same size. The third option is the same as the formerly mentioned except the 10" rack tom has been replaced with a 14"x51⁄2" snare drum.

There are a plethora of individual additions also up for grabs, again with very reasonable pricing. Extras include 13" and 14" rack toms, a beastly 18" floor tom and old school 24"x15" and 26"x14" bass drums. The 14"x5.5" snare is also available individually at the mere price of £179 which could be easily added to one of the snare-less packs.

There is also a 14"x6.5" version which still comes in at less than £200 RRP. All of the above are available with the same '31-step lacquer' finishes that can be found on the Masters and Reference Series. Three are available: Piano Black, Antique Ivory (as review) and Sequoia Red.

Like the original Session Series, the shells are of a hybrid nature. In fact, the six plies of the 7.5mm shell are mostly birch (four plies), with the remaining two plies comprised of kapur wood. One of these two layers can be found sandwiched roughly in the middle, while the other makes up the inner layer of the shell. This inside layer should have the most influence on the overall sound of the drums and, as Pearl suggests, the kapur will therefore 'darken' the sound of the birch.

Pearl says, "This timeless combination creates a shell with powerful attack and beautiful tonal decay. Fitting for virtually any style of music or venue."

In a bid to complement the tonal qualities of the drums, the kits are shipped with clear Remo Pinstripe batter heads on the toms and a Powerstroke 3 bass drum head. The coated white Powerstroke reso comes ready ported with a 5" hole. A neoprene bass drum muffler can also be found ready to go straight out of the box.

All drums come with chrome hardware which includes the Opti-Mount suspension system for the rack toms and the 2.3mm 'Superhoop II' which is supplied with each drum (except of course for the bass drum which has matching wood hoops). Both features are borrowed from the SSC's big brother, the Pearl Masters Series.

As you may have guessed already, the presence of the Opti-Mount means that the toms are completely un-drilled, as is the bass drum. Other chrome goodies include the single RL Session lugs which are the same as the ones used on the original Session Series from 1995-2003 (12 on the rack toms, 16 on the floor tom and 20 on the bass drum), and of course the seriously chunky bass drum spurs and air-cushioned floor tom legs (again, both used on the high-end Masters Series). Unfortunately, no tom arms are supplied with the shell packs.

With the sturdy hardware shared with Pearl's flagship Masters Series, the kit gives the impression of being moderately heavy weight.

In the process of setting up for a gig, we notice how solidly the bass drum spurs lock into place, how well-crafted the tom suspension is and how well designed the bouncy feet of the floor tom legs are. This feel of quality is confirmed by the high- gloss piano white finish (or 'Antique Ivory' to give it the proper name) which is undeniably beautiful.

There are a few tell-tale signs though that we are in fact dealing with a mid-range kit here. We refer specifically to the noticeable joins on the inside of the shell. Generally speaking though, aesthetically the drums seem well made and look the business. But do they sound it?

In short yes, yes they do. Starting with the rack toms, we tinker with the resonant heads and tune them to a medium tension. This affords both drums a wide tuning range, controlled by the batter head. With barely a tweak of the key, the drums are low, punchy and demonstrate a lightning fast attack. Slightly further up the tuning range, the toms become more tuneful but maintain a girth to their sound.

The 10" tom in particular has a wonderful tone and is thoroughly addictive to play. Reminded of a classic Vinnie Colaiuta-style sound, we find that we channel licks that we barely knew we had up our sleeve.

Even cranked up really tight, both toms have a roundness to them which is almost certainly a by-product of the birch and kapur mixture. Of course the thickness of the supplied Remo Pinstripe heads will have a massive impact on the timbre created.

As you may already have imagined, the 16" floor tom also packs a spectacular wallop. Again, tuned low it has a slappy attack and a trouser-flapping low-end growl. Tuned a little higher, the sound is once again rounded out and becomes a little warmer.

The bass drum is a little harder to get exactly where we want it. Expecting a fairly dull thud, the out-of-the-box tuning reality is that of a wide open 'boom'. Tuned right down on both the batter and reso, the sound is improved but still doesn't have the sharpness that one might expect considering the character of the toms.

Even with the included dampening pillow, we find that we are reaching for more! With some more fine tuning and a little more dampening, the bass drum is sounding considerably more fat and punchy.

In summary, then, each drum packs a fair punch but also has a pureness to its tone and a strong resonance. The kit's wide tuning range is sure to be a winner with players perhaps looking to step up to the next level and looking for a versatile mid-range kit. We'd be very keen to check out the accompanying snare drums and the enormous 24" and 26" bass drums.