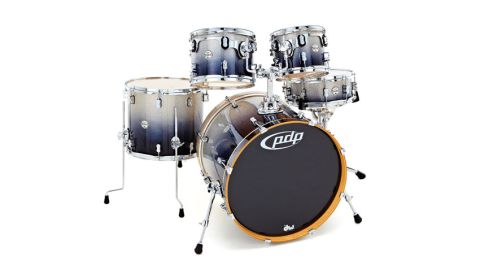 The standard of build, components, finish and performance of the Concept Series is exceptional, all the more so considering the pricepoint.

Pacific Drums and Percussion's Concept Series is a major new drum kit range in which the influence of parent company Drum Workshop is more evident than ever.

Offering a choice of either all-birch or all-maple drums, the Chinese-made Concept Series replaces three existing PDP ranges - X7, M5 and FS. After being unveiled at NAMM 2012 earlier this year, Concept kits are now arriving in the UK.

More shellpack and finish options are available for the maple Concept Series drums, which would suggest that PDP expect a greater demand for maple kits. However, both types of wood are equally provided for in terms of individual drums. Interestingly, there is no 13" diameter tom listed for either wood.

Shell construction is identical for both types of wood, being 7-ply for the toms and bass drums whilst the snares are a thicker 10-ply. Standard cross-ply technique is used throughout with all the inner and outer plies (where visible) running horizontally. Bearing edges are cut sharply 45° with a shallow backcut and so resemble DW's standard Collector's Series edges.

Other than being sanded, the insides of the shells have been left untreated. On the outside a total of eight high-gloss lacquer finishes are available and the maple kit gets the lion's share of the options.

DW's reputation for lacquer finishes is second to none and the review kit's lacquers bask in this shared expertise. The Silver to Black Sparkle Fade is about as glam as it gets, with the mass of flakes buried in the lacquer reflecting light from any angle.

PDP's familiar oval lugs are not found on Concept drums. In their place are what PDP describes as dual-turret tube lugs, which seem to echo the round-turret lug design found on DW drums. Their familiarity is down to the fact that they were first devised as a double-ended snare drum lug for DW's Performance Series.

This is just one of several Concept Series components previously only found on higher-spec DW drums. Though the lugs are one-piece, like tube lugs they are fixed to the shell at two points.

The lug provision is generally excellent with even the 10" tom having 12 lugs and the snare's 10 double-ended lugs ensuring maximum tuning accuracy. In concentrating resources on the smaller drums, PDP has managed to make savings by restricting the 22" diameter bass drum's quota of lugs to 16. The optional 20" bass drum shares the same number of lugs, while the 24" kick gets the full treatment with 20.

Whilst on the bass drum it's also worth noting that across the Concept Series all toms are mounted from the bass drum. Though there's nothing to prevent you from acquiring a stand to hang the toms from, all bass drums come fitted with a tom-post socket. As yet, PDP has no plans to introduce undrilled bass drums.

STM suspension mounts are supplied for each rack tom, gripping a full four lugs. Described as being DW-style, they certainly bear a strong resemblance to those found on DW drums, differing mainly in the shape of the apertures for each lug.

Setting the kit up, it sounds seriously impressive. Whenever we've encountered a bona fide DW kit, one of the first things that has struck us is how good the bass drum sounds. The Concept kits appear to have inherited this fundamental quality.

The presence of the DW-like Velcro-attachable pillow undoubtedly helps, as does the integrity of the shells and every other component, but slapping the head on then tensioning out the creases finds the kick springing into life at the first touch.

A perfect thunderous blend of attack, note, depth and air is summoned up from each stroke. So complete is the sound that we leave any fine-tuning for later and just dig in and play.

The toms benefit from another DW dropdown in the form of graduated counter hoops. The theory behind them is that unnecessarily heavy shell dressing will stifle smaller drums, so three thicknesses of hoops cover the kit. Smaller toms (8" & 10") are fitted with 1.5mm hoops while those found on the larger toms and floor toms are 2mm thick (snare hoops are thicker still at 2.5mm).

Much like the bass drum, putting heads onto the toms and tuning them up brings instant results, with the supplied clear Chinese-manufactured Remo Ambassadors letting them sing. The maple-shelled toms are sweet-sounding with a wide range of frequencies represented.

More DW features grace the snare, including the clasp-style MAG throw-off and copper snare wires. With their extra three plies the shells are chunky-looking and tellingly heavy. The influence of the additional wood extends to the drum's sound as well and it's closer to a boutique drum than a bundled snare in performance.

The maple snare is a little wide of note - even when cranked up - and rounded at moderate tunings. In reality, it's a versatile and polished instrument that could be dropped into any musical situation.