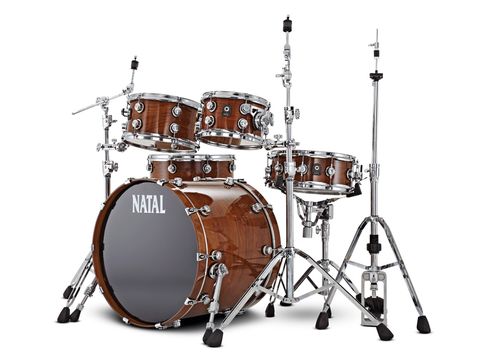 Natal's already glowing reputation is guaranteed to be cemented with this well-appointed, excellent value kit. Expect more from this British brand!

To say that the arrival of Natal's first range of drums in 2011 caused a stir would be something of an understatement.

The British brand practically gatecrashed the market, launching its range of pro kits in a choice of four varieties of wood in one hit. In the process Natal scooped the Best New Drum Brand award at NAMM and then followed it up with the MIA Percussion Product of the Year award; not a bad first year by any standards.

Twelve months on from unveiling the company's first ever kits, Natal is kicking off 2012 in style by adding a fifth wood option to its stable in the shape of an all-walnut kit.

Up until the last year Natal was better known as a manufacturer of bongos and congas. Company founder and respected UK percussionist Alan Sharp began making his own instruments in the late 1950s, eventually forming the Natal Percussion Company in 1965.

Fast-forward through the decades to 2010 when Natal was bought by Marshall amps (whose president Jim Marshall is a lifelong drummer) and the resources necessary to develop the first Natal drumkits were all suddenly in place. Marshall provided the technical depth and design expertise to conceive and then put into production the range of kits, going from first sketches to actual launch in something approaching record time.

Natal also holds a personal connection for Jim Marshall, as evinced by his own page on Natal's website. His association with Natal pre-dates the start of his amp-building empire and the ubiquity of the Marshall stack.

Before he turned to manufacturing Jim ran a music shop in London (employing among others, the young Mitch Mitchell) and stocked some of Alan Sharp's earliest instruments, so the re-emergence of Natal as a serious drum builder suggests things coming full circle.

With 2012 being Marshall's 50th anniversary year you also get the sense of some carefully laid plans coming to fruition.

The new walnut-shelled kit shares its construction specifications with existing Natal maple, birch and bubinga drums in the form of thin, 5.5mm 7-ply shells. The walnut used is North American and comes from a sustainable source.

Walnut is frequently used for decorative effect, such as in the dashboards of upmarket cars, and casting eyes over this kit it's not hard to see why. Simply coated in a clear high-gloss lacquer, the deep chocolatey hues of the walnut shine through with unambiguous beauty, the effect heightened further by delicate swirls of dark grain.

From the outset Jim Marshall was clear that he didn't want to just buy up parts and assemble them into drums with a Natal badge on. This commitment to design integrity means that every facet of the drums has been designed from scratch, so these neither look nor feel like any other brands out there.

Shell construction is the most critical aspect of any drum's success and here Natal is on the money, with the shells scoring highly in terms of roundness and general build quality.

The aforementioned outer clear lacquer is expertly applied while inside the shells are sanded but otherwise untreated. Bearing edges are finely cut at 45° and finished with
a coating of beeswax.

Natal's turret-style lugs combine oval and circular motifs and, being turrets, extend proudly away from the shell. Their sparkling chrome-plating ensures that they reflect yet more of the walnut shells from any angle while Natal's famous sun logo is cast into the outer face of each lug.

The oval/circular motif theme is repeated across the kit in various details - most notably in the snare throw-off, tom arm brackets and floor tom leg brackets.

We noted in our review of the first Natal kits last year that despite having thin shells the drums are surprisingly heavy on account of all the hardware attached to them. This is much the case with this kit and, after adding in a selection of Natal's rock-solid Pro Series stands, transporting the whole caboodle into a venue provided a free workout.

In common with all Natal drums, single-ply Aquarian heads are fitted across the kit. With a relatively thin Polaris batter head and no port on the front head, the bass drum was initially prone to over-resonance in the form of booming.

This briefly became an issue when we needed to mic the drum. Cutting a hole in the front head and inserting some dampening soon righted things and the drum got on with pushing out low, punchy notes.

Walnut is known for its darker tone but we found this drum largely focused and clean in its performance. Taking the tuning down reveals some darkness but there is still a satisfying slap with each stroke.

Putting tension into the head diminishes the attack slightly in favour of a dense woody note. Throughout the tuning range the drum never sounds anything other than large.

The snare is unexpectedly sharp and crisp, leaning naturally to higher tunings. Here it bites through with searing clarity, while possessing enough body to instil it with authority.

Rimshots leap from the drum with blistering aggression while cross-sticking is reproduced loud and clear. The energetic feel to the drum extends to its playability, with the slightest touch at the edges being enough to get the snare wires buzzing.

Tuning the snare down in an effort to extract a little more crunch required a change to a slightly thicker head for maximum effect, but the desired result was achieved. The 6½"-deep version of this drum is definitely on our 'must try' list.

Walnut's characteristics are most evident on the toms, which breathe warm, rich tones with a level of sustain that could only be described as luxurious. The stubby rack toms respond instantly while the floor tom offers up as much note as it does power.

Swapping the supplied coated heads for single-ply clear versions opens up the sound further, making the drums beefier in tone and punchier overall. The glorious fade remains, if anything being even longer.

Fitting twin-ply heads intensifies things again, sounding not unlike the drum equivalent of a nuclear option.