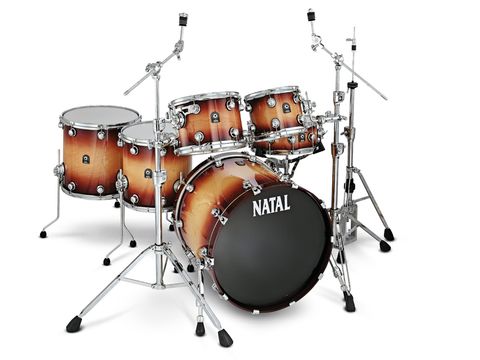 An excellent, well-designed debut kit from Natal at good price.

Natal is the British percussion company started in 1965 by Alan Sharp, the conguero with funk band Gonzalez.

Natal's fibreglass congas became hugely popular and were even played on stage by John Bonham. Natal continues with percussion but this is the company's very first drum kit.

It follows Marshall - yes, the famous amp company - acquiring the marquee in 2010. Legendary Marshall founder Jim Marshall is a lifelong drummer and so the idea came about to develop a Natal drumset.

There is just the one, professional range but it's available in a choice of four woods: maple, bubinga, birch and ash/birch. Natal has also developed two lines of hardware to support the kits.

All Natal drums are produced to the same standard, varying only in the wood you choose (there's an identifying badge on each bass drum) and the available finishes. Natal sent us two kits, a Fusion X in bubinga and a Fusion 22 Plus in maple.

Both shell packs include 14x5½-inch snares in the price, but hardware is additional. The Fusion X consists of 10x6½-inch and 12x7-inch mounted toms with a 14x12-inch mounted floor and 22x18-inch bass drum.

These two set-ups are culled from a choice of 13 suggested shell packs, but you can buy any item separately. And Natal offers a wide range of drum sizes (including 13 toms from 8 to 18-inch), along with plenty of finishes.

The shiny and smooth kits we have for review are 'Pewter To Black Mist' (bubinga) and 'Tobacco Fade' (maple) lacquers.

Maple, bubinga and birch shells are enviably thin at 5.5mm and 7-ply, while ash-birch shells are 6.9mm, 6-ply. Insides are sanded to a silky finish but not lacquered. Bearing edges are 45°, sharp and level, and hand-finished with beeswax.

With a completely new product there's always the chance of teething troubles and with everything going so well we were slightly dismayed to discover a tiny gap in the join of the inside ply of the 14-inch maple tom.

Every other drum was fine. In fact, all the shells were almost perfectly round, something that is rare indeed. And remember, these are some of the thinnest shells around, which you might expect to distort more easily than thick shells.

Despite the shells being admirably thin, the drums are surprisingly heavy. This is testament to the massive hardware and fittings and the 2.3mm triple-flanged hoops.

There is nothing generic about Natal drums since all the fittings are obviously tailor-made. Each drum has two smart Natal badges with the air holes neatly providing the 'sun' of the Natal logo. The round lugs, of stout-walled, chrome-plated zinc, also bear the Natal logo and are based on extra-thick rubber gaskets.

Small toms have the obligatory isolation brackets with acronym - Natal's is NRM (Natal Resonance Mount). This grabs onto two lugs, isolated from the shell again by thick rubber gaskets.

The innovative part of the system though is the actual holder (single and double) which is of the ball and clamp variety, except the ball is non-slip aluminium instead of resin.

Bass drums have monster calibrated spurs which extend from 260mm to 360mm.

Also of note, every tension rod is dipped in red nylon and has no less than three washers: a tiny one, a normal sized one (both of steel) and a black nylon one. The idea being to reduce de-tuning.

Natal has an arrangement with Aquarian to supply heads. These are all single-ply Mylar - Galaxy Coated batters on the snares and toms, with Zenith Clear tom resonants and (thinner) Zodiac Clear snare-sides.

Alongside the drums, Natal has developed two complete series of hardware, a Standard and Pro series. The review kits came with the Pro series which is as feature-packed as the drums.

There is just one cymbal stand but it's superb. It's a disappearing boom design and we love the continuously adjustable (non-geared) tilter.

Section casings are huge and have equally massive slot-in memory locks. Even the boom arm has a small, contoured memory lock, while yet a further stop-lock memorises the open spread of the tripod legs.

Single and double bass drum pedals have all manner of adjustments. Footboard and heel plate are broad enough for the biggest of clodhoppers. The hoop clamp has a swivelling plate to accommodate the curve of your bass drum hoop and there's a spare tightening key clipped underneath.

Complementing the double pedal is a hi-hat stand with just two legs so that it stays well out of the way. It's never going to be as stable as a tripod, and because of the way the footboard folds out you have to be careful when setting up or it can sway drunkenly. But again, the design detail is impressive - even the cymbal tilter has a locking nut.

Finally there is the phenomenon of the snare drum stand. The teenager in us wants to scream: "OMG! This is weigh over the top!" It's twice the weight of any snare stand we've ever seen before. Your roadies will love you.

Setting up was easy since the stands are so solid and user-friendly. Hauling around the heavy drums and hardware is less fun, though. For the casual gigging drummer, the pro hardware may prove too much and the budget series may be more practical.

For example, we love the pro cymbal stand, but by the time you have three of them in your traps case you're in hernia-land. That said, the Pro items do have top features.

None more so than the gargantuan snare stand. Its ultra-strong, off-set cradle can be manoeuvred seamlessly into any position - up-down, forwards-backwards and can even be rotated on its horizontal axis.

There are no cogs, it is all continuous adjustment. And because of its vast centre bracket you can position the tripod legs right away from your double pedal, close to where you are sitting.

In terms of sound, the biggest difference between these two kits lies in the fact the bubinga model has shallow 'fast' toms, while the maple has more conventional-depth toms. This affects the sound more than the subtle difference in flavour imparted by the two shell woods.

However, we could directly compare the two bass drums and snares as they were of similar dimensions. After much agonising we felt the bubinga was (infinitesimally) darker in timbre than the maple. The maple has more mids with a more open tone.

It's really an incredibly subtle (and personal) difference though, that you'll only really appreciate after playing your drums for several months. Attack-wise they seemed pretty much the same.

We'd not tried Aquarian's Galaxy coated batters before, but they sounded fine. Most drummers will change to their preferred heads soon enough. Suffice to say, these single-ply Mylar heads bring out the maximum resonance of the thin shells.

The first tom we struck was the smallest, the 8x7-inch (bubinga) and it was particularly impressive - super resonant and shockingly loud. All the floor toms fairly rattled with energy, responding to the slightest touch with a deep growl.

And when it comes to the bass drums, hang on to your hat. The wind they created was enough to launch a ship. The thin shells really reverberate on these big drums, generating a tremendous flapping slam. Lively is a huge understatement.

Not so keen on the supplied batters, we swapped to an Aquarian SuperKick-1 - a personal favourite - which, with its felt damping ring, just about controlled the drums' impressive exuberance.

Turning to the snares, the three position (off, on, looser) Tri-Throw strainer looks good and has a comfortable lever, but we're not convinced. We'd rather find one good snare setting than two compromises.

It took forever to find a single position that was satisfactory and we never really found workable dual settings. So not for us, we're afraid.

It may be that the snare tension is not helped by the deep snare beds which lead to over-tightening of the resonant head around the snare bed area. Most modern snares have a shallower and longer dip so that the thin resonant head doesn't get wrinkles.

However, when we did eventually find satisfactory snare tensions both drums sounded grand - responsive and fully resonant again, with lively rims and cross sticks.

The centre of the bubinga snare was darker, deeper and thuddier, while the maple seemed brighter and more open. But again, the difference is minuscule and subjective.

What an impressive debut these kits make. Jim Marshall OBE can be proud of what Natal has achieved. For a first set this really is exceptional. More thought has gone into the design of these drums and hardware than has gone into many a line established for decades.

There's perhaps an element of trying too hard with the hardware - but hey, that's to be applauded.

The concept is simple: one series of professional drums in a choice of four woods. The shells are admirably thin and amongst the roundest we've ever measured. On top of all this, the pricing is ultra-competitive. Go check 'em out!