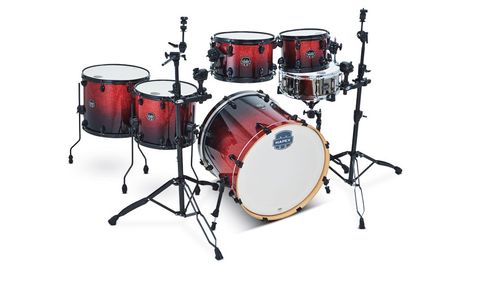 Armory presents yet another significant step in the impressive onward march of Mapex. With hybrid shells, rounded bearing edges and superb finishes it will surely storm the middle market.

"We are making strides in developing our drums and the technology and craft used to produce them. We don't want to be caught resting." So says Korg/Mapex's Pete Havard, and there is no danger of that with this wholly new series which makes strong claims on the vibrant semi-pro gigging market.

Mapex's Tornado, Voyager and Horizon starter series are all good value with decent specs, while the Meridian Birch/Maple bridged the gap with the professional Saturn IV and Black Panther Collection.

"In as much as the Meridians will no longer exist, the Armory and Mars series will take over," says Pete. But, he confides, "I don't like to say they're replacements as they don't share any previous elements."

The shells have angled butt seams and blemish-free interiors, lightly sealed as per usual. The bass drum was 1⁄4" out of round, which is pushing acceptability, even for a budget drum. The other shells were all within 1/8th", which is normal at this price point.

Aside from the hybrid lay-up, there's the profile of the bearing edge. Whereas this is commonly a 45° slope-up from the inside wall to a sharp-ish edge on the outer plies, the Armory's SoniClear edge has a 45° slope up to the maple mid-point, with a rather bigger round-over to the outer wall.

You'll have noticed the striking finish, a rich and glittering Magma Red lacquer fading from deep red to black. Then there's the complementary black hardware. This is one of six combinations that Korg UK is promoting. The other five are Transparent Black with black hardware, Transparent Walnut with chrome, Mantis Green with black, Photon Blue with chrome and Cordovan Red with chrome hardware.

The Magma Red is gloriously rich, superbly glassy, and the black hardware is also impressive. All fittings have a thick, satin-polished, plastic-like black coating. Mapex explains this is an electro-plating process with significantly increased durability compared with powder coatings. We can't vouch for that, but we've known powder coating to chip almost immediately, whereas this finish certainly looks to be of exceptional quality.

And, moreover, the black finish extends to the tension bolts, washers and gaskets, etc, which is often the sort of detail that others annoyingly overlook. Although the hardware and stands are not included in this shell pack, it's worth noting that they too have been redesigned and are available in a choice of chrome, black or chrome and black.

What is included in the package though is the snare - an impressive 14"x51⁄2" steel-shelled brute called Tomahawk. It has a mirror black-chrome 1mm shell, with chrome fittings. The black hardware is not carried through as the Tomahawk needs to sit comfortably with all six sets. Any inner welded join is completely hidden and there are 10 double-ended bridge tube lugs with swivel inserts and 2.3mm Super Hoops.

Hauling up the 20-strand coiled-steel snare wires via their brass end-plates and black tape is Mapex's neat strainer which operates via a double-hinged pull-away lever. It's not the smoothest, but is firm and the tension knob is easy enough to operate.

The SoniClear Tom Suspension System mounts are taken from the up-market Saturn IV range. The design involves a three-point mount - the two upper points bracketing off adjacent lugs, while the lower arm is not fixed, but freely rubber-buffets against a small bumper plate on the shell. The hexagonal 'L' arm (which is chrome not black) clamps to a stand. It's over-complicated, but no more so than many others in the modern isolation-obsessed drum world.

Taking their inspiration too from the Saturn IV are the new, sharp-edged lugs and floor tom legs with big sprung isolating rubber feet.

Armory combines the two most widespread shell materials, birch and maple, hoping for the best of both - the focusing wall of inner and outer birch plies, with a core of brighter, warmer maple. It's an attractive mix, but probably of more significance is the SoniClear bearing edge.

In keeping with a number of recent trends it's a nod in the vintage direction. Most modern edges (including most of Mapex's) have a sharpish outer peak with a minimal round-over. The SoniClear edge extends that round-over half way and Mapex makes bold claims for it.

Bearing edges have long been subject to heated discussion. There is a continuum from the pencil sharp 45°/45° centred peak of, say, Spaun, to the completely rounded, vintage style of, say, Ludwig's Club Date or DW's Classics. By general consent the former will give you a pinpoint response with good sustain (more of the head), the latter a softer, more woody timbre (more of the shell).

But in its enthusiasm to hype-up its new edge Mapex claims that more typical, sharper edges cause the head "to sit high, resulting in tuning difficulty, poor shell resonance and lack of tonal clarity". This is a bit rich - are all Mapex's other shells therefore rubbish? We don't think so.

The logic of the more rounded edge is increased head-to-wood contact, garnering more shell tone. We personally like rounded edges with the resulting slightly softer, darker, warmer timbre. And that's how the toms felt to us. Tidy, with their short shells, woody and pleasingly mature.

The bass drum, with both full heads perimeter-damped, was also a beaut. Having no intrusive tom mount and only 16 lugs opens it up to impressive resonance, resulting in a loud and lively boom.

The Tomahawk snare drum feels weighty, which is good for a snare. It tuned up easily enough, functioning better from mid to high batter tensions, less well low, where it was sludgy and brutish with reduced sustain.

Steel is such a hard material it can seem to lack complex character, leading to a severe tone, particularly at higher tensions. It really came alive at mid-tension, after some sustained playing, opening out with a snappy, focused backbeat contrasting with high-pitched ringing rim-shots and a commanding cross-stick.