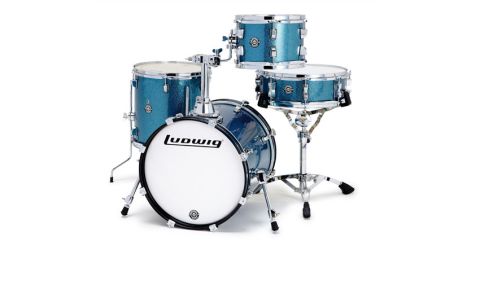 An affordable kit that lives up to its design, this kit will suit any style of 'groove' player and is even a great quality set for kids. Breakbeats offers a cohesive package of portability, sound and all-round style!

Ever since Sonor started the ball rolling with its Jungle Kit in the early '90s, the mission to go micro has err, grown. Indeed, the Jungle is still going strong today, and most major drum companies offer a 'bop' configuration in their line-ups.

With venues closing down, gigging spaces becoming smaller and a shift away from louder styles of music, it could be the perfect time to reevaluate your need for a dual-kick, five-tom set-up. In reality a 16" bass drum is hardly the definition of ultimate sonic versatility, so a reduction in size carries the possibility of a reduction in price.

That's what Ludwig has done here, having enlisted the help of walking groove encyclopedia, Questlove (The Roots, Jimmy Fallon). Questo's idea behind the Breakbeats kit is to combine portability with decent sound quality:

"I wanted to build a device that was apartment-friendly and compact for the street musician but was quality-sounding. A gritty, raw, 'break-able' kit for gigging in clubs that you can fit in a cab."

As with other kits of this configuration, what you get is a fundamental drop in shell size: 16"x14" bass drum, 10"x7" rack tom and a 13"x13" floor tom. Questlove and Ludwig have spec'd the snare in standard 14"x5" dimensions rather than opting for a 13" or 12" shrunk-down size. Also included is a riser to lift the bass drum, ensuring your pedal's beater is striking the centre of the drum, and a tom holder with a mounting space for an auxiliary boom.

The shells are all seven-ply poplar, which on paper, is a slight disappointment - Tama's Silverstar Metro Jam is made from birch, Gretsch's Catalina Street is mahogany, and both are available for a similar street price.

The bearing edges are cut at 45°, and the whole thing comes wrapped in a Blue Azure finish, adding a touch of vintage class to the Breakbeats set.

There are a couple of touches that go above and beyond here too: Remo Pinstripes are fitted to the two toms as standard, plus the drums come with their own velvet bags. These function as basic, non-padded gig bags, but they've also been 'designed' to be used as a set of mutes for practice/quieter performance.

We were rather cynical about Questlove's claim that you can fit this kit in a cab. With no taxi to hand, we comfortably transported our review shell pack to a rehearsal studio in the passenger seat/foot-well of a tiny car. Ludwig 1, cynics 0.

Taking the kit out of its bags, we were impressed with the quality of the kit's build. The chromed hardware feels solid, with a weighty tom-holder, quality, smooth hoops and the sturdy riser. The wrap is applied with neat seams across the whole kit.

Less impressive is the Ludwig/Questlove badge. It's a sticker, which looks like it could easily wear or peel off over time, and along with the adequate yet spindly-looking feet on the floor tom legs, gives away the kit's pricetag.

The most intriguing part of the kit is the bass drum. If you've only ever stuck to 22" kicks, set your preconceptions to 'shattered'. Okay, so it's unlikely to replace a larger kick in a conventional rock set-up, but given the shell construction and size, this thing is capable of acting like a small cannon.

Ours arrived with the heads barely tightened, and applying slight tension to both sides resulted in a fairly dead thump, with a surprising amount of low-end. Upping the tension on the batter head gave more attack and punch, without becoming too 'open', and tightening the resonant head resulted in a clean sustained note. It's a versatile little monster, coping with different tuning ranges well while maintaining a clear fundamental.

This comes with one caveat, though. Burying the beater has a large effect on the sound of this kick, muffling notes for a rather plastic attack, and even bending the pitch if you dig in. This can be used to your advantage, but if you're a 'pedal undertaker', you'll want to address your technique.

The only other negative relates to the riser - after an hour or so, the pedal had crept forward enough that the chain was catching on the bass drum hoop. The only solution is to clamp the pedal back tightly to prevent this, but there is the threat of it happening mid-gig.

For what could be considered a rather pedestrian choice of dimensions, the Breakbeats snare holds a lot of character. Questlove's definition of 'break-able' is best applied here. It has a slight trashy, grittiness to its sound, and even at lower tunings it finds a good combination of crisp response and full-bodied overtones.

However, we preferred the snare cranked up, resulting in a distinctly vintage funk sound, where alternating between ghost-notes, centre-hits and rim-shots complement each other brilliantly - 'break-able' indeed, particularly if you intend on using this kit for funk, hip-hop or live drum'n'bass grooves.

The toms continue the versatility, too. While we were worried that the stock Remo UT heads might stifle some of the tuning range, it was actually very quick to dial in some usable sounds. The small diameters (the floor tom is the same diameter as the second rack tom in a 'rock' configuration!) don't really lend them a 'power-tom' sound, but we coaxed fat, clean, sustained notes from them at the mid-tension sweet-spot.

Tightening the batter heads also works well for higher tension jazz/fusion tunings, adding extra rebound and attack to our sticking - great for double-strokes. You might think muffling the kit with the gig bags would have the same effect as the old 'T-shirt-on-drum-head' trick, but it's actually more subtle. We were expecting a dead, cardboard-box tubbiness, but we got a more resonant sustain.

A plus if you're prepared to use these in a live situation (reduced volume without being unusable), but a minus if you're hoping to appease your neighbours while practising.

And that brings us to our final point: don't confuse 'small' with 'quiet'. This kit is by no means a hushed solution for playing in a terraced house. As with other drums of these dimensions, it's loud enough to have the noise abatement team camped outside your house, but that's a good thing.

Although pushing the top-end of 'budget' it's a hard kit to fault. Aside from the slight niggle with the riser and the rather cheap application of the logos, it's the perfect 'alternative' kit if you need to downsize on a budget for more streamlined gigs.