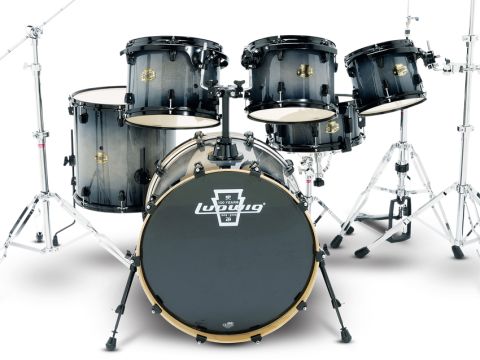 It's impressive that Ludwig, with its illustrious history, has honed details which turn a good kit into a brilliant one. As did the Accent CS Custom, the Element Lacquer takes Ludwig's Chinese-made intermediate kits to a new level of desirability.

Ludwig celebrated last year's centennial with loads of new products. The previously intermediate level Accent name transferred to the starter range, while the new Element took over, with the Epic on the upper-intermediate slopes.

Ludwig also introduced its '6/4/5 Program', with an extra 'free' tom thrown in with drum kits in the Epic, Element Lacquer and Element Standard series. The very good news is, Ludwig is keeping up this offer for 2010.

There are three Elements - PVC (Standard, with plastic wrap finishes), Lacquer and SE (Special Edition). Here we have a Power kit, one of four set-up configurations in the Lacquer series, the others being Fusion, Power Fusion and Emo.

The shells are a hybrid of Marbled Birch with a Poplar core - an outer and inner hard layer sandwiching a slightly softer middle. The Marbled Birch has a subtle, wavy, watermark-like grain and the lacquered finish is glassily smooth. Bearing edges are a sharp 45 degrees with a single-ply 45 degree turn-over. They're accurate and well finished.

Our measurements confirmed the shells were round to within 1-3mm, which is fine at this level. Inside they look neat, although we noticed a slight gap at the inner join of the snare shell, with the inner ply not quite sitting flush. Nothing serious, but a warning to keep an eye on quality control.

Ludwig calls its new lugs Classic Keystones, based on the vintage Classic lug, but incorporating a low mass bridge design. A smaller version graces the toms, a bigger version the bass drum, while there's a double-ended version on the snare.

Along with all the hardware - bass drum spurs, tom mounts and snare mechanism - the lugs are finished in a thick black powder coat. So thick the metal hardware could almost be mistaken for bullet-hard plastic. The 14"x6.5" snare has an uncomplicated side-lever strainer which also allows snare tensioning with a drum key.

The new badge is a jolly banner-style affair. It's a proper badge, but lacks the gravitas of earlier Ludwig badges. We're probably being old grouches here, though.

The three small toms all have Ludwig's heavy steel Vibra-Band isolation mounts. Two toms mount off the central bass drum post while the third is bracketed off a cymbal stand. Stands are not included in the package.

This is a big, six-drum kit with a prodigious sound. We're so used to reviewing kits with huge bass drums coupled with tiny 10" and 14" toms it's something else to get a kit configuration which is almost a throw-back to 1980s power pop or prog. If you want that mega 'blam' sound then classic sized 13"x9" and 16"x16" toms are the answer.

But having four toms gives you choices… it means you can mix and match, from tight and funky to punk and Emo.

Birch definitely gives that dark edge - there is a clarity and compactness which makes tuning and recording easy. This extends to the bass drum - 18" is deep enough for a low tone, but not so deep you lose definition. It's quite a hard sound, with relatively short sustain, a controlled punch.

The highlight for us though was the snare drum. Wooden snares on budget and intermediate kits are often the weak link. Well, Ludwig has decided to do something serious about that, starting with a thicker shell. While the toms have resonant 6mm, 6-ply (2:2:2 birch-poplar-birch) shells, the snare drum and bass drum have 8mm, 8-ply (2:4:2) shells.

And the snare drum hoops are also thicker - chunky 2.5mm rather than the already impressive 2mm of the toms. There are eight, not 10, double-ended lugs, which is enough because the hoops are thick so there's little chance of distorting and the tuning suffering. Plus, the shell is less stifled.

Finally, Ludwig has cut deep snare beds and the whole result is that this drum sounds brilliant. With both batter and snare wires tightened quite high, the definition is outstanding, without awkward overtones. At medium-soft tuning there's a deep, thick tone; warm but edgy, dirty, wet and funky. Slackened off even more, things get slushy, fat and swampy.

Overall the bite of the birch off-set by the slack-ish tuning is a delicious combination. We also loved the rim-shots which have a metallic clank over a decidedly woody birch timbre.