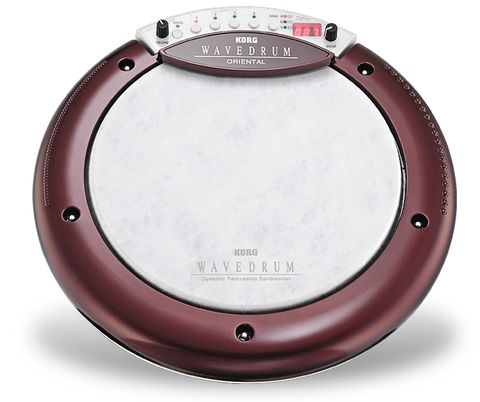 Last year's Wavedrum was great, this one is even better. And for all its oddities, we wouldn't have it any other way.

We last reviewed a Korg Wavedrum in 2010, when we looked at the second incarnation of a truly great electronic percussion instrument originally released in the mid-'90s.

Then, we raved about its organic tone and responsiveness - now Korg have updated the Wavedrum with 50 new 'Oriental' sounds, exclusive to this limited edition version.

Other than the additional sounds, the Wavedrum Oriental is exactly the same as the original 'second generation' Wavedrum.

The same tensionable head sits in the middle of the comfortably-sculpted chassis, with a modest control panel at the top. Controls are limited to six buttons - for patch/bank selection and editing - volume control, a three-section LED and continuous control value pot.

In terms of connections, the Wavedrum is similarly economical, with just left and right outputs, aux-in and headphone output. There's again no provision for MIDI connectivity on this Oriental version, something that doesn't bother us in the slightest given its pre-eminence as a standalone instrument.

It's inside that the changes have been made, with nine new algorithms being used as the basis for the 50 new sounds that the Oriental offers. There are three new basic types of algorithm here; one used for single-skinned (thin) hand percussion, one for single-skinned instruments with jingles and one for double-skinned drums with a snare.

It's no surprise to find that the new algorithms deliver sounds that are completely in keeping with the three-dimensional quality of the existing Wavedrum soundset.

It's an incredible instrument capable of real sensitivity and an acoustic-like response that sets it apart from anything else currently available, and the new sounds live up to expectations.

The name of the unit is somewhat misleading, though. 'Oriental' here refers to 'The East', but not the Far East, so if you were expecting gamelans and taiko drums, you'll be disappointed.

Instead, it specialises in Middle Eastern instruments; darabukas, bendirs, reqs and the like, all of which feel predictably lifelike. Combining rim sounds with the 'main' head instrument on each Wavedrum patch allows for real expressiveness, as does the ability to pitch-bend sounds by increasing pressure on the head, etc.

Last year's Wavedrum was great, this one is even better, with a broader range of sounds that sit perfectly with the 'standard' Wavedrum tones.

We can't help feeling a little mis-sold with the 'Oriental' tag, given the lack of Far Eastern percussion, but what is here is extremely impressive.

There's no massive leap (or any change at all) in terms of editing ease - it's still a case of poking around being guided by arcane abbreviations from the LCD screen, but the weirdness of the Wavedrum is what makes it special.