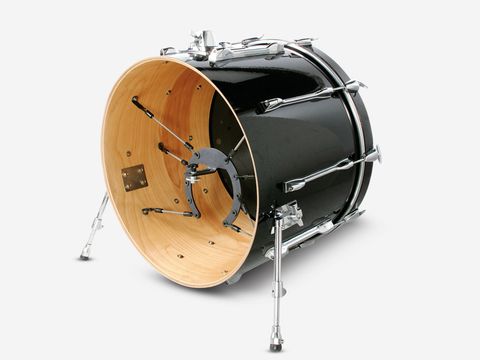 If you're used to mic'ing your drums regularly you'll know just how much time it adds to setting up for a gig or recording. The Kelly Shu could well be the answer.

As well as setting up the kit, today's gigging drummer often has to mic it up as well. A common time and energy-saving response to this extra work is to avoid putting up another stand and simply drop the bass drum mic onto the padding inside the drum.

But this does neither the mic nor the drum justice because the mic won't be in the ideal position and part of its natural polar pattern will be blocked by the padding.

Enter the Kelly Shu, an aluminium (though a cheaper composite version is now available) bass drum mount in the shape of a horseshoe, which can be fitted inside or outside the drum and, once properly installed, could mean you never have to position the bass drum mic again.

While internal mic'ing is not a new concept, the way the Shu supports the mic is unique. A series of bungee straps spread the weight of the mic and clamp around various points of the drum, like a large spider on a rather rubbery web.

According to Kelly Shu, this also offers a huge array of mic positioning options and excellent isolation from the shell.

The well-packaged box arrives with a rather odd-looking assortment of clips, leather loops and rubber bungee material, as well as the mount itself and at first glance installing it all looks like an afternoon's work.

However the loops easily attached under the nutbox screws inside the drum and, with the bungee cut to length and clips attached the mic, it was inside the drum in the desired position within 20 minutes. The flexibility of the bungee offers excellent isolation from a thudding kick drum, as well as from less intentional thuds during transit, while the mic clip simply screws into place on the Shu itself.

It should be noted here that this system is really designed for use with larger diaphragm mics such as Shure's Beta 52 or AKG's D112.

As well as installing the mic inside the drum, the Shu can be mounted from the lugs of the batter head to enable the mic to be placed over a sound hole. However, with a little work, some cable and connectors, the mic can be hard-wired inside and a full front head used.

The downside of this is drilling your pride and joy, but the upside means no more sound engineers offering to cut holes in your bass drum head and always having your bass drum mic in the ideal position.