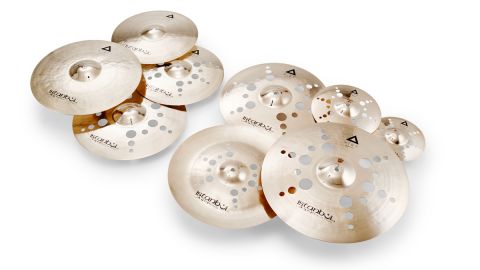 The Xist IONs bring a modern sound to the table at a reasonably modest price-point. Bold and glassy FX sounds across the board and infinitely stackable.

With over 35 years on the cymbal-making scene, the Istanbul cymbalsmiths need little introduction.

Istanbul boasts ownership of a host of series under the Agop name including the Traditional Series, Custom Series, 30th Anniversary Series and of course the Xist Series, in addition to several Signature Series for artists such as Cindy Blackman (Lenny Kravitz).

The Xist range itself can be broken down into the regular type, Brilliant, Power and ION versions. Let's check out the newest additions to this ever-growing collection.

As you may have spotted already, the distinguishing characteristic of the Xist ION range is that each cymbal features carefully positioned circular cut-outs which are designed to alter its tonal characteristics. Those familiar with the likes of Sabian's O-Zone cymbals or Zildjian's EFX range (among others) will know that the outcome of this treatment can be an explosively short and dry attack. The same can ultimately be expected of the Xist IONS.

The symmetrical cut-out configuration across the surface uses six larger holes surrounding the bell (three on each side of the logo), then in a straight line across the bow toward the edge of the cymbal, another hole neighbours each of the six and then another one; each slightly smaller than the last.

The size of the cut-out holes are proportionate to the dimension of the cymbal in question. For instance, the larger holes on the 18" crash measure in at 4cm in comparison to the 1.5cm of the 8" splash. Interestingly, the bottom hi-hats have no holes at all, only the top (quite often you will see the opposite).

So, completely underestimating the specialist nature of these cymbals, off we march to a gig, armed with nothing but this set of cymbals (and one of our own ride cymbals to complete the set-up). Now, had the gig been something of an electronic nature such as drum'n'bass, we may well have gotten away with it. Unfortunately, this was not the case.

The hi-hats particularly have an incredibly sharp and cutting sound which is more closely related to some kind of cymbal stack rather than a regular pair of hi-hats. The 14" hats are super-trashy and have a sort of cheap sound to them, amplified by the slight ring that emanates from them when struck. The stepped hi-hat is explosive and cuts well through grooves. Again though, sounding more electronic than anything else.

The 16" versions work really well as a pair of x-hats, sounding very much like a Benny Greb-esque trash hat.

The splash cymbals have a very similar personality, producing a fast and incredibly glassy note. The 8" is so quick that it's there and gone in a flash. Almost to the point where we are checking to see if we have cracked it every time.

Due to the thin profile of the cymbals, they are rather soft and flexible which as well as aiding projection, allows me to accidentally turn the splash cymbals (which are mounted upside-down over the crashes) inside-out on several occasions.

The crash cymbals, although still ferocious, are more adaptable and can just about get away with being main crashes (genre dependant, of course). In fact, the more we use them, the more we crave the sheer assault that these cymbals bring. A regular crash cymbal becomes almost dull in comparison.

Strangely the 18" is higher pitched than the 16", although the 16" is still shorter and a little drier. Despite this anomaly, the pair are matched well sonically (in fact so is the whole set). The missing 20" and 22" crashes would certainly be worth checking out too.

The china cymbal is as suitably brutal to the ear drums as you might expect. There is a small element of 'pang' to it but it's dried out quite a bit by the holes. And of course being just a 16" it is quite short also.

The whole range of cymbals lend themselves particularly well to being stacked, especially the smaller ones. With one of the splashes placed on or under a crash, it instantly imparts a little of its own character into the bigger cymbal, making it sharper, faster and trashier.

In summary, there is amazing fun to be had with these cymbals but you'd probably only want one or two to augment your current set-up. Also, beware of the "hi-hats".