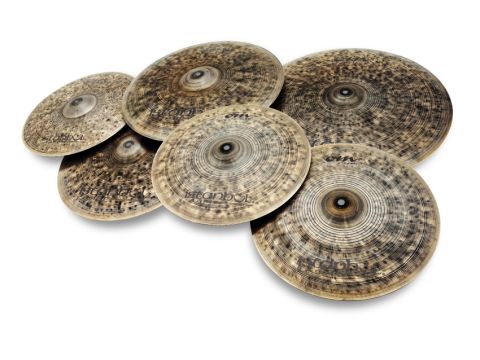 Between them, Istanbul Agop and Cindy have come up with an excellent and refreshingly distinctive set of cymbals - it's perhaps no wonder that at the time of writing this selection was the only remaining unsold set in the UK.

Cindy Blackman is best known for the decade she spent occupying the drum stool for Lenny Kravitz, but away from rocking stadiums she's an accomplished jazz drummer. Cindy's recent arrival at Istanbul Agop as an endorsee appears to have resulted in mutual delight, with her signature Om Series being unveiled at NAMM 2009.

Cindy liaised directly with Istanbul Agop owners Arman and Sarkis Tomurcuk to achieve the sounds she was looking for, with all three deciding on the name 'Om' for its positive associations.

Made up of a single pair of 15" hi-hats, 16", 18" and 20" crashes and a 22" ride, the series takes jazz central as its starting point but contains hints of a wider versatility in the sizings.

As with all Istanbul cymbals, some areas of production remain trade secrets, but all Om Series cymbals are individually cast from B20 bronze and then hand-worked. As is to be expected, the cymbals bear plenty of hammer marks and have also been heavily lathed.

Covering the entire cymbals - particularly within the grooves - is a blue/ black patina that rubs off on your hands. Our guess is that it's a pre-ageing coating which replicates the process of a cymbal gathering dirt over years of playing and increasing complexity along the way.

For a drummer known for her big hair, it's only fitting that Cindy should also have a penchant for big hats. The 15" Om hi-hats possess a wonderfully deep note, offering a beguiling mix of characteristics from dry when closed tight, through fat when shouldered, to sloshy when half open.

Their size makes them capable of being loud but their mellowness prevents them from getting anywhere near grating.

The three crashes blend together perfectly, shimmering into life quickly when hit. Initial brightness soon gives way to a more involved mix of frequencies, centred around a low, dark note.

The 20" crash is actually more of a crash/ride as it performs convincingly in both disciplines. There's trashiness present in all of the crashes, most notably in the 20", which spices the sound deliciously.

The 22" ride is an incredibly articulate cymbal capable of reproducing flurries of notes fluently. The stick sound is dry and metallic, yet warm, and sits on a cushion of wash.

Perhaps displaying its jazzy roots, the ride doesn't have the biggest of bells, but we found it had no problem projecting in playing situations far louder than acoustic jazz.