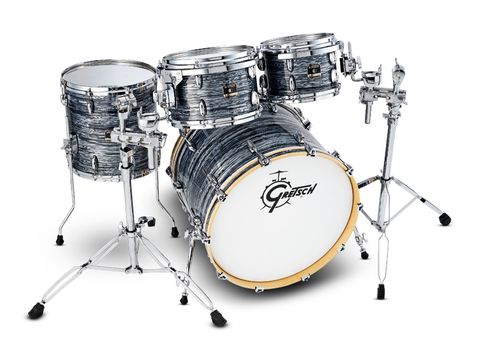 Gretsch has come up with a kit that combines classic looks with the sort of sound quality and build standard that will both appeal to and cope with the energy levels of younger drummers. For the price-point it's well equipped and has the added lustre of the brand's heritage. An equivalent Gretsch USA Custom kit is four times as expensive and, while the Renown Maple is not going to match it for sheer ﬁnesse, it's nonetheless a pretty versatile set of drums.

Gretsch's remarkable history has seen it making drums in three different centuries. Founded in the late 19th Century, the company celebrated its 125th anniversary in 2008.

Over the years, countless drumming greats have plied their trade behind a Gretsch drum kit and current endorsees include players of the calibre of Vinnie Colaiuta and Stanton Moore. While Gretsch's high-end drums are amongst the best in the world, the Renown Maple series is an altogether more affordable Gretsch line that is manufactured in Taiwan.

Four new Renown Maple kits, which include the stunning example on review, were unveiled at Frankfurt 2010 and are exclusive to European markets. The review kit is a four-piece shellpack made up of a 22"x16" bass drum, 10"x7" and 12"x8" toms and a 14"x14" ﬂoor tom.

Gretsch makes quite a few of its non-premium drums in Taiwan, including its highly rated Modern Classic range. Originally launched in 2002, Renown Maple drums were designed as cheaper alternatives to Gretsch's ﬂagship USA Custom range and, as far as possible, mirror the spec level and manufacturing process.

With the word 'maple' featuring so prominently in the name, you'd expect it to share a similarly high proﬁle in the shells and indeed the shells are 100 percent quality North American rock maple. Renown Maple drums actually contain a higher proportion of maple than the USA Custom drums they are modelled on.

Stateside Gretsch drums are made largely, but not entirely, of maple - within the shells are a couple of plies of something else. The maple that goes into Renown Maple drums is sourced from both the USA and Canada. All drums share a common construction of six plies apiece, with the exception of the optional snare drums, which feature 10 plies.

The drums' other details continue to match the USA Custom blueprint. Bearing edges are cut at Gretsch's standard 30° while the company's famous Silver Sealer coats the inside of the shells. The die-cast hoops and GTS tom suspension mounts are identical to those found on higher-range Gretsch drums. Only the lugs diverge in any meaningful way and that is by a small margin.

The distinction is in the three faint scorelines etched lengthways into each bullet-shaped lug.

Across the drums, the other hardware components are of an equally high standard, with the ﬂoor tom clamps and legs being pro level while the bass drum claws and spurs are reassuringly solid. There is no scrimping on heads, either, as the kit comes ﬁtted with a full complement of Evans batter heads.

The four new ﬁnishes are divided into two lacquer options (Piano White, Dark Walnut) and two wraps (Silver Oyster Pearl, Blue Sparkle). Both wraps are supplied by Delmar, recognised as the best wrap producer in the world. And with good reason: the retro-chic Silver Oyster Pearl wrap of the review kit looks even better in the ﬂesh than it does in the pictures. While the pattern has an air of familiarity about it, Gretsch has been canny enough to ensure it is not only unique, but also exclusive to the Renown Maple range.

Complementing the vintage-look ﬁnish are the drum depths, which are all standard lengths. In an era of super-long bass drums, it's particularly pleasing to ﬁnd a 16" deep bass drum. Aside from its chunky spurs and claws, the kick's biggest concession to modernity would seem to be its undrilled status.

Appearances can be deceptive though; while everything about the kit's look suggests old school, the build quality, standard of hardware and choice of heads is very much 21st Century.

In the case of the kick drum, the Evans EMAD batter head brings serious depth to its sound. With both heads tuned just above ﬂapping point, it delivers as deep a note as you could use. While the shape of the sound isn't quite on a par with the bottomless shudderings of contemporary-length kick drums, it comes closer than you'd expect.

The drum's shorter length promotes quicker interaction between the batter and front heads. This produces a sweet, powerful and punchy drum. Any decay is cut off cleanly due to the integral EMAD foam ring, making further damping unnecessary. Removing the damping ring from the head allows the decay to ring on a little longer, but not by a massive amount. The note rises as tension is dialled into the tuning rods, but the tight, focused nature of the sound remains.

EMAD heads are designed to be on the dry side, so to get a proper vintage-style 'bonk' requires a change of head to something thinner and more open-sounding. Still, retro looks coupled with a modern sound will be right up many a player's street.

The toms are much in the same vein. Thin all-maple shells cut with rounded 30° bearing edges are likely to be warm and resonant, while die-cast rims tend to sharpen the sound. In the middle of these two inﬂuences are the heads themselves - twin-ply Evans G2 batters - which give a thick, wet sound with plenty of attack.

Like the bass drum, the toms deliver a decidedly modern performance, cutting through with ease while producing rich, fat notes. Swapping the G2 heads for single-ply coated versions reveals a different side to the toms. The level of attack recedes - but doesn't disappear, thanks to the hoops - while the warmth increases. Cranking up the tuning transforms the toms' sound into one that is authentically vintage - clean, woody and ringing.