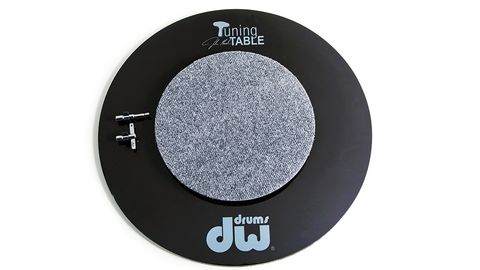 The table looks smart and functions more or less as expected. Without doubt, higher quality than the majority of DIY jobs but comes at an astronomical price.

Those of you that have ever looked for tuning tips on the net will have most likely stumbled across a video or two of DW Vice-President John Good, utilising a spinning contraption whilst tinkering with his drums in the Californian workshop.

Further searching online will reveal countless forums discussing how one might create one's very own tuning table (or 'Lazy Susan') in the style of John's. Spotting this gap in the market, DW has now released a high-end alternative to the DIY option.

Having previously worked as an established drum tech (with a CV exhibiting artists such as Earth, Wind And Fire and Frank Zappa), it is safe to say that Mr Good knows a thing or two about tuning drums. Ladies and gentlemen, the John Good Tuning Table.

The tuning aid comprises two black plexiglass disks (perspex to some) coupled together by a "friction-free, high grade bearing swivel".

The larger 21" disk serves as a base while the smaller 12" disk is designed to swivel freely atop the rotary system.

The whole unit can be turned upside-down for use with larger drums such as floor toms and bass drums. Each side is carpeted to provide a soft and non-slip surface for the drums.

The top of the base features the 'John Good tuning table' insignia while the bottom has a large 'DW Drums' logo (both grey). To the left of the top disk, two black clips house the included tuning keys. One a standard drum key, the other intended for use with a power drill. A zip-up carry case is also provided.

The ability to quickly whirl the drum around for easy access to the desired tension rod is certainly a novelty, coming in particularly useful for opposite tuning.

The crowning glory though has to be the included drill-bit attachment. Put to use with a small battery-powered drill, head changes are made super speedy and an absolute doddle. Using the ratchet setting on the drill makes it possible to get a fairly even tension/tuning without having to start from finger tight.

Looking between the plastic disks to get a glimpse at the rotary mechanism, it is clear to see the DW craftsmanship at work. Finished in an attractive brushed steel, the mechanism glides smoothly and quietly, feeling sturdy with no wobble.

On the down side, the table does not work so well with the larger drums as the clips for the keys can get caught on the floor. Put it this way, we struggled enough with a 16" floor tom let alone a 22" bass drum!

Also, after using the table for a couple of weeks or so, the glue has started to fail and the carpet is beginning to peel away from the plastic. This is despite being kept in its carry case for the majority of this time.