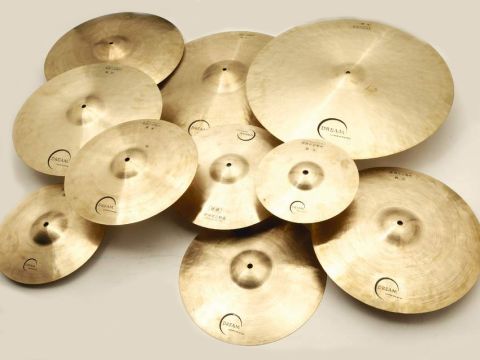 Every 20" ride will sound slightly different, so you need to choose with care, but that's the appeal, like rooting out a rare vintage instrument. Cymbals of class at budget prices.

While the Dream Bliss and Energy series are made from traditional B20 bronze, the Contact series is, unusually, made from B23: 23 percent tin content and 77 percent copper. With such a high tin content the result is a lovely silvery-gold colouring and a slightly brighter stick response. The cymbals have a satin ﬁnish with Chinese-style graphics, and surfaces are lightly dimpled with barely discernible hammering, close-lathed top and bottom.

The Chinese have been making gongs in Wuhan for around 2000 years, so they know a thing or two. It's quite probable the Turks got their original know-how from China. These Dream cymbals show tiny marks and scratches from being entirely hand produced in less than super efﬁcient, super clean modern factories. We're assured that "smelting, pouring, casting, shaping, hammering, ﬁnal ﬁnishing and tone and pitch control are all done by men with hammers in their hands".

If you're into heavy metal, you should maybe look away now - these cymbals won't deliver a face melting. The vibe is softer and mellower: a hint of China trashiness, a spicy tang and bell-like clarity. They need coaxing, not slaying. But while they're not clangers, they can certainly be played hard.

The 20" crash/ride is bone dry, whereas the 22" has much more wash. When crash-riding the 20", the crash erupts, full toned, then dries out quickly, getting right out of the way. The body that surrounds the clear dry stick response is dark and throaty. This is in contrast to the 22", which has a much bigger and broader surround-sound.

"The extraordinary thing is that crashing with a stick feels more like you've gone at it with a beater. The buildup is in slo-mo, soft as butter, unbelievably deep, and the sustain is forever".

This time when crash-riding, the explosion is colossal, lasting much longer than with the 20". The bell is also signiﬁcantly bigger and louder, although sweet of tone. The 22" would be great in a big swing band, and the 20" tasty for small-group jazz.

The 24" Half Cup Ride is truly something else, one beast of a cymbal. With an ultra small (3") bell and vast, almost ﬂat surface, it exhibits the super-crisp stick response of a ﬂat ride, but beneath there's this humungous (though harmonious) zinging hum, like you've disturbed a horde of bees. Imagine a gong sound but without the feedback-like build-up. Despite this you can crash-ride and the ride carries on with total clarity.

The extraordinary thing is that crashing with a stick feels more like you've gone at it with a beater. The buildup is in slo-mo, soft as butter, unbelievably deep, and the sustain is forever. This is a cymbal like no other. At whom it's aimed we've no idea, but it's a killer.

The 14" hats possess the same soft warmth, which probably makes them too sedate for most rock. There's a lack of bite so they could get lost. Whereas we were happy to risk the 22" ride on a rocky gig, we didn't risk the hats. The pedalled sound is also understated, but half open, Ringo-style swishing is perfect - a frothy, sea spraying din. These are real old-fashioned 'sock' cymbals.

The rest of the set is more straightforward. The 16" and 18" are loosely described as crash-rides. Riding the 16" felt better than the 18", which is a nice enough crash, but a touch spongy. The 16" has the dryness of the 20" so works as a small, tinkly feature ride. The proﬁle of these cymbals is similar to classic A Zildjians, and that's what they reminded us of.

The bells are quite prominent, giving the cymbals projection. Reasonable all-rounders, but not the longest sustain or the fattest harmonics.

With good body for its size, the 14" is deﬁnitely a crash rather than an over-large splash. The two splashes, 10" and 12", have a great 'tiss' factor. Being quite thin, they're quick and silvery; the 12" has more mass and plenty of presence while the 10" is just a little bit weak.