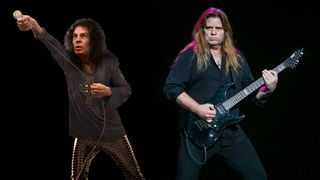 Now, the Disciples are set to take the hologram on the road with the Dio Returns tour, which kicks off on 6 December in Denmark.

It’s fair to say that hologram performances remain a divisive subject, but with past icons including Michael Jackson and Tupac already receiving the technological treatment, and forthcoming Frank Zappa and Rob Orbison hologram tours in the works, it looks destined to be woven into the fabric of live entertainment’s future.

Taking on the critics, guitarist Craig Goldy is keen to stress the tour is intended to commemorate and celebrate Dio first and foremost.

“The band Dio was run like a family, because it was a family,” says Craig. “And when an important family member dies, those left behind often do things to keep their lost loved one’s memory alive. Ronnie had an extended family… his fans from all over the world! Whenever we do a Dio Disciples concert, in my heart it’s a memorial service in the form of a concert.”

Craig cites the eye-boggling production of the mid-’80s Sacred Heart tour as a key differentiator between Dio and other performers of the era - and a reason for friction between band members over the years.

“When the Sacred Heart tour came out, Ronnie practically cut his profit margin in half bringing the fans an 18-foot fire-breathing dragon,” Craig recalls. “He didn’t hike up ticket prices for all that; it was his way of giving back to the fans.

“So even though a lot of money was made, a lot of money was being spent! And I think that’s when all the problems started with certain band members, ’cause they didn’t have the same heart for the fans as Ronnie and Wendy [Dio] did - it started to become about money. And I’ll just stop there, because things are getting better with certain band members, and I don’t want to spoil it!

“The hologram is supposed to be a gift to the fans, plain and simple - given in the same spirit in which Ronnie gave. People don’t remember, but Wendy was a big part of how that whole Sacred Heart stage set was built, put together and without hiking up the ticket prices, too. Same thing for the Dream Evil tour, with the giant metal spider that came down out of the rafters.

“They were magical days with magical people behind that magic, and this hologram is just that! Some people never got to see Ronnie on stage with Sabbath and Rainbow - some of these holograms eventually will bring back those days, too. This is something that’s done in the name of love, honour, missing him and respect, nothing else - and that is the truth.

“People will be missing out on an incredible experience if they let bad comments make that decision for them. Plus, I think Ronnie would approve of this hologram being done in the way it’s being done - I’m sure that anyone who has worked as hard as he did and made as big of a worldwide impact would like their name and memory carried on by those people that he loved and surrounded himself with by choice.”

The legend lives on

Employing his trusty ESP M-II electrics and an Engl backline, Craig does admit performing with the hologram has been an unusual experience.

“It does feel a bit surreal, and hearing his actual voice singing the way only he can sing sometimes is very difficult to bear,” he admits. “But rehearsals have been productive so far. Everyone wants this to be as special as it’s meant to be, and everyone associated with this tour all has the same heart and work ethic that should go along with such an endeavour!”

The live show features several spots for improvisation, ensuring no gig is the same, while Dio’s pals Tim ‘Ripper’ Owens and Oni Logan also take the lead for the career-spanning set.

“Tim would be considered the main, or lead singer,” Craig explains. “Ronnie loved Tim and took him on as his protégé - and asked Wendy to manage him for a while!

“Ronnie and Tim were friends and it made perfect sense for Tim to step into this role, not at all as if he is replacing Ronnie - ’cause no-one could do that. It’s just that this band is a family still, and only band members of Dio or close friends of the Dio family are the ones to become band members of the Dio Disciples.

“We also have two singers as our way of saying that it's impossible for one man to even sing a whole set of Ronnie’s songs without the help of another! Oni is much more than a second lead singer; he, too, was Ronnie’s friend, and Ronnie loved Oni. So, Oni is like our special guest singer - yet still a band member.”

No matter what form the legendary vocalist takes, Craig continues to hold Dio close as both a companion and a hero - and he still loves performing the classics with his old friend, with further touring planned for 2018.

“Ronnie was and still is my favourite singer, and that means he sang on nearly all of my favourite songs - I love the way we play Straight Through The Heart, Stargazer, Gates Of Babylon and The Last In Line.”

“In times of trouble, he was the voice that I turned to - it was like we were friends before we ever met. That is what a fan was to Ronnie: a friend that he just hasn’t met yet!”

And it’s these fans who Craig hopes will come together to commemorate the great man’s music with the band onstage.

“When a group of people gather together with the same purpose, heart and mind as one another, something very special will always occur,” he muses.

“Same thing for the Dio Disciples concerts: the fans that show up there also have the same purpose, heart and mind as we do, and there is always a very special moment in time during these events, where the band and the audience bond and become one with each other - and when that happens, it’s like nothing else… it’s just something that you have to experience for yourself.”