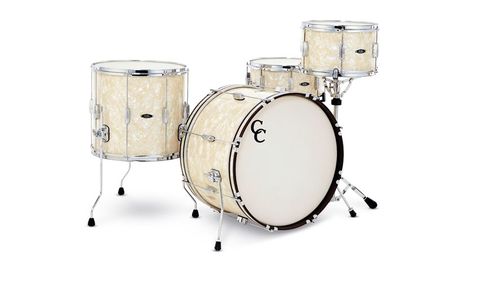 This is another superbly built, great-looking and excellent-sounding kit from C&C, which offers a genuinely different sound and feel to the discerning player.

Back in 2012, this hitherto exclusively custom builder launched its first production kit, the C&C Drums Player Date. This smart retro-themed kit, built with custom care while remaining comparatively affordable, was an immediate hit.

In the wake of its success the Missouri-based company has shifted its focus to include more off-the-shelf kits. Though still retaining its custom arm, C&C now offers three production lines: the original Player Date, the Player Date II - the subject of today's review - and the LPL (an acronym of the luan/poplar/luan shell construction). With more new series to be announced at this year's Frankfurt music fair, C&C is an outfit with no shortage of ideas and inspiration.

C&C founder Bill Cardwell notes that while vintage drums are routinely sought after by drummers wanting to emulate the sound of classic players, when said recordings were committed to tape, the drums being used were in fact new rather than several decades old.

The introduction of the Player Date was an attempt to not only make C&C's handmade quality available to a wider audience, but also to recreate some of the performance and character of a vintage kit using modern and more reliable manufacturing techniques.

Plans for the Player Date II were already fermenting in Bill Cardwell's mind while he was en route to the 2012 NAMM show, where the original Player Date was about to be unveiled. The PD2 largely follows the same blueprint with the only major difference being the shell construction.

Where the PD1 features 100 percent luan shells, the PD2 combines the luan with maple; 7-ply for the snare and toms and 8-ply for the bass drum. The shells are straight sided and made up of two outer and inner plies of maple surrounding an inner core of three plies of luan. The extra ply in the bass drum is maple and has been added for strength, both in terms of construction and sound.

Luan is a species of mahogany found in Asia. In some circles it is regarded as a cheap wood, but the top quality luan Bill Cardwell sources costs about the same as the American maple that makes up the rest of the shell.

He chooses luan specifically for its musical qualities. The inner and outer plies of maple and the centre ply of luan are all horizontal with the remaining four plies of maple and luan being vertical. The plies of maple and luan that meet are intentionally stacked in the same direction (as opposed to being crosslaid) to influence the shell's tone. All those plies combine to make a thickness of 9mm for the snare and toms while the bass drums clock in at an impressive 11mm.

When removing the head of a modern drum, more often than not you are hit by the sharp smell of industrial glue. This wasn't the case with these drums; when checking the roundness (which was spot on) we instead found a fragrant, almost honeyed aroma, reminiscent of the heady mixture of leather and wood that perfumes the cabins of upmarket cars. This can only be attributed to both the quality and frugal use of glue in the shells.

The bearing edges for the snare and toms are described as 'full contact'; they are cut in one smooth curve across the entire width of the shell. That of the bass drum resembles a more conventional edge with a peak, but again it is rounded off to maximise head contact.

Double-ended Radio King-style beavertail lugs are centrally mounted on all of the drums. Each increase in depth is catered for by lengthier tension rods. While their appearance might suggest a degree of fragility, the rods are solidly engineered from chrome-plated steel and are extremely strong - tough enough to lift any of the drums by alone - though this isn't recommended. Such minimalist hardware leaves the shells free to express themselves with as little interference as possible.

Though fitted with a Remo Powerstroke 3 batter, the bass drum comes with a plain Ambassador front head along with an optional felt muffle strip. Without the muffle in place the drum is tympani-like - deep and booming with a decay that could be timed in minutes rather than seconds. Tucking the felt strip behind the front head brings the decay into nearer (rather than infinite) focus, but it remains an incredibly resonant drum.

The immediate punch that comes from a shallower depth is followed by low rumble that almost registers in fathoms. Tightening both heads finds the drum moving towards jazz territory with a buoyantly open sound, while slackening off the tension rods reveals even greater depths.

Cutting a port in the front head or replacing it with matching Powerstroke 3 would rein the decay in further (pleasing any close-miking sound engineer), but with its factory-fitted head the kick sounds supremely big and its undeniable power is further spiced by a touch of darkness in the note.

In comparison the toms are relatively dry and not only can be, but demand to be, played wide open as they are almost overtone-free. Where thin modern shells often produce up-front attack with bottom end following through, these thicker shells jab out brawny mid-tones that pummel their way rather than slice through the mix. Each figure played around the toms is marked by exceptional definition and the combination of the two woods ensures that warmth and depth of note are as equally well catered for as projection.

The snare is brisk and lively when played quietly, with a crisp head-wide response. Equally, its 61⁄2" depth means that there is plenty of authority ready to be called upon when required. Like all the other drums its impeccable manners make it seem somehow older and from a different era. The kit feels played-in, as though any sharp edges have been gently worn smooth.

As with the original Player Date, the only problem is likely to be getting hold of one as C&C's European distributors are based in Germany. According to C&C,a network of UK dealers should be stocking the kits soon. Watch this space.