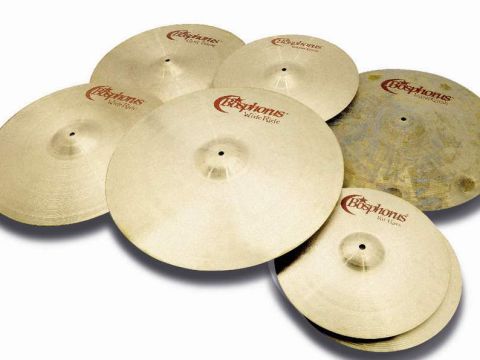 Stanton Moore and Bosphorus spent two years working on these cymbals before their initial launch, and it shows. As a set they sound complete, slotting together harmoniously in terms of tone, pitch and volume.

Like many New Orleans musicians Stanton Moore has been shaped by the melting pot that is his home city. Now recognised as a leading contemporary second line drummer, his CV details an astonishing variety of gigs, from marching bands to heavy metal.

Like all Bosphorus cymbals, Stanton Moore's are entirely hand made from B20 bronze.

With the exception of the Trash Crash, the cymbals are relatively normal in appearance. The tops have been ﬁnely lathed and then buffed to a lustre ﬁnish. Hammer marks are visible beneath the lathing bands but are generally a discreet presence.

Underneath, each cymbal has been worked in the manner of Bosphorus' New Or leans series - the surface is left raw and then lathed in one continuous spiral with a wide tool. The cymbals share a fairly ﬂat proﬁle across the models and are all medium-thin in thickness.

If you're familiar with Stanton's résumé, you're probably expecting a degree of versatility to the cymbals. However, our ﬁrst impression was just how polished they sound.

The 14" Fat Hats have a real silkiness to them. There is warmth present - as you'd expect from a pair of hand-made B20 cymbals - but it sits beneath a bright sheen. Played softly, they give a delicate, silvery response.

Upping the velocity, the top end begins to assert itself, giving the hats great projection. When the stick is angled down to include some shoulder they fatten up rapidly while washing them half-open reveals another step up in power. There are few musical settings they couldn't perform in.

The smoothness evident in the hi-hats also extends to the two Wide Rides. Again the sound is rooted in warm tones, but the warmth is part of a brighter overall presence. The stick sound is utterly beautiful - a clean metallic ping against a near-perfect shimmer of wash.

No matter how fast we played we couldn't generate any meaningful build-up of wash, with each stroke remaining well-deﬁned. Away from riding duties, both cymbals open for crashing, with the 20" model being naturally a little quicker off the mark and also in its decay. Due to its higher pitch, the bell of the 20" ride carries further than that of the deeper 22", but the mellow tone of the larger cymbal made it the clear winner to our ears.

Pangs are part of the china family but are exotic rides as opposed to accent cymbals. Stanton's Pang Thang features a conventional bell and bow, with only the gentle upturned ﬂange betraying its true nature. Elements of a regular ride can be heard in the pang, as the stick sound has a depth and deﬁnition that is close to that of the Wide Rides.

The tuning leans towards trashy but in a gentler manner than that of an equivalent china. Crashing the Pang Thang gives a more china-like response, though with less aggression involved and a longer decay.

Of the two new Smash Crashes only the 16" model was sent for review. It's a warm-voiced crash with an assertive edge that helps it cut through well for a relatively small diameter.

The 20" Trash Crash is the cymbal equivalent of a mutant species. In essence, it's a 20" crash to which seven huge hammer blows have been added around the outer circumference. The blows are so deep that the edge has been pushed into a wave. The effect they have on its sound is just as dramatic, giving it a buzzy and distorted tone.

It's surprisingly good as a weird ride, supplying a recognisable stick sound above discordant pockets of wash. When crashed it explodes in a furious burst and then chokes back rapidly, the hammering also inﬂuencing the amount of sustain it produces. An unusual, but strangely addictive cymbal.