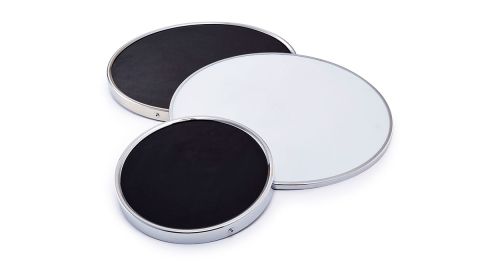 Any of these products will ensure good neighbourly relations, keep the occupants of your own household blissful and we are sure will assist in your valuable practice routine.

Way back in the early '70s, Bill Sanders developed and engineered a practice drumset which, with the exception of a few nips and tucks, has changed little since it was first marketed.

Today we have three new practice products from the Sanders camp, including two pads designed to be struck by sticks and another specifically aimed at those wishing to brush up their figure-of-eights.

All three pads are designed for portability and may be used as standalone practice aids. The stick pads come in either an 8" diameter or 14". Both sport a wooden base with a surprisingly hard rubber stick-resilient surface and a non-slip matting. Around the edge is a chromed metal ring, designed to act like any standard snare drum hoop.

The 12" diameter brush pad has a coarse playing surface upon a rigid plastic. This is specifically designed to produce a 'swishing' sound when sliding and rotating the brushes. While this pad will be at home on any table-top surface, it is also sized to fit directly atop the snare pad, if required.

As anyone who uses steel brushes will agree, they can prove extremely abrasive - rapidly chomping into the coating of a drum head. Therefore, it will be interesting to see how this pad holds up under normal practice/playing conditions.

It's interesting to note, the surface will also allow you to draw with dry-marker pens - useful for teachers to demonstrate brush pattern performance templates or as a simple memory guide.

We are testing the larger of the two stick pads on a table, within the cradle of a snare stand and directly on top of our snare drum. In position on the snare, it has the benefit of 'triggering' a little of the snare sound.

Though designed to give the feel of a tightly tensioned snare, neither stick pad has a wrist-friendly playing surface, with little or no absorbency for stick impact. Generally speaking, it would be wise to avoid playing for prolonged periods if your technique involves tightly gripping sticks - but then, it could be time to change your technique!

Both of the stick pads do, however, emit a clear, precise and very dry stick sound (when not on a snare drum!), which makes them ideal for detecting the slightest deviation in strike interval.

Practising with them certainly appears to improve stick control - as we found to our shame! While either pad is undeniably useful for practice, they may also be used as an ideal pre-gig warm up, without even disturbing the rest of the band in the dressing room.

It is surprising how effective the rough surface is on the brush pad - swirling brushes around produces a convincing effect which, though audible, is not too invasive.

It may save you having to practise on your favourite snare, transferring those typically black marks onto the snare and then onto your cymbals - also characteristic of steel brushes. And, speaking of wear... we played the brush pad for a few hours and could not see any evidence of the coarseness smoothing away.