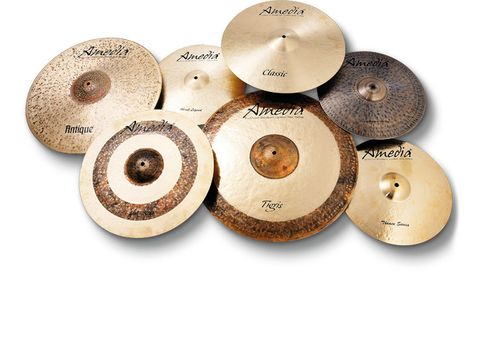 Amedia offers a huge, temptingly different and potentially bewildering selection of genuinely hand-crafted cymbals, made in the time-honoured Turkish manner. Prices are, at the moment, exceptionally attractive.

When we first encountered Amedia in 2005 we noted that for a small, traditional Istanbul workshop they produced more types of cymbals than anyone else. Currently the website lists 16 series and Amedia is able to make 1,300 different cymbals.

New UK distributor Alex Lindley says, "Cymbals are by individual order only at the moment and take about five weeks to delivery. However, I am building up a stock of the more popular lines such as Thrace, Dervish, Galata, Antique and Classic for immediate dispatch in the future."

Amedia cymbals are completely hand-made and hammered using basic tools and techniques going back 300 years. Apparently the foundry/workshop has only two machines - an antique pressure roller to reduce metal disc thickness while hot, and a motorised spinning lathe, with all the off-cut shavings recycled back into the melting pot. There is YouTube footage of this process. A health and safety showcase it is not.

The bronze alloys used combine tin and copper in varying percentages, some with a 'secret' ingredient known only to Ahmet Baykusak, the co-owner and master cymbalsmith. Many are superbly eye-catching. For example, the Antique ride has an un-lathed bell which is chalky green and red with leopard spot hammerings, while the rest of the cymbal has bright gold scratched lathing rings overlaying dark brown liver spot hammerings.

The Kommagene hi-hats by contrast have a dusky blue hue, the result of a 'secret combination of specific alloys'. There's also a Galata crash which has a mottled brown un-lathed bell and 'Saturn' band, the rest lathed and polished. And a Tigris ride, the edge of which is un-lathed on top but lathed underneath. Completing the selection, the Ahmet Legend and Thrace hats, plus the Classic Dark crash all have conventional brilliant finishes.

The 20" Tigris ride has an especially defined stick-tip response so you almost feel like you have a nylon-tipped stick when you haven't. The outer un-lathed edge is darker and softer and needs careful coaxing, while the bell is much higher in pitch. Overall the sound is deep and dry, yet versatile, whereas the 20" Antique ride is more specialist.

Amedia says that the unusual sound and look are the result of two special steps in manufacture - double hammering and second exposure to the wood-fuelled furnace. This gives it a dual sonic identity. It is medium-heavy so the stick-tip response is again bright, yet due to the hammering and lathing there is a dark underlying roar which rounds it out. Then there's the bell which is lively and clangy. In all, an unusual ride which, despite the antique label, could appeal to rockers who fancy a relatively dry tone.

We have three pairs of hi-hats, starting with the 14" flagship Ahmet Legend, named for Amedia's master cymbalsmith. Thin-to-medium in weight, they are aimed initially at jazz drummers. The stick-tip sound is soft with a clear tone which is deep and sweet though not powerful. Ideal for backing jazz/folk singers or instrumentalists where sensitivity and restraint are required. When clashed the sound remains smooth and mellifluous. Testing them out in a loudish student workshop confirmed they will struggle to cut through if the music gets too loud.

The 14" Kommagene hats had almost the opposite effect. The sound was at times somehow too thick, even obtrusive. They are heavier, particularly the bottom cymbal, and this gives them more beef so they worked better when the music got louder. Half-open there is a full sizzle, thick and creamy.

Our third pair of hats are the smaller 13", well-behaved and tasteful Thrace. The sound is similar to the Classics but a little spikier, higher pitched and penetrating, largely from being smaller.

The 16" Galata crash is medium-thin, so fast-reacting and splashy, yet deep-sounding for a small cymbal, full and slightly metallic with a welcome hint of trashiness. The 17" Classic crash has a denser sound. Striking this one you feel you are engaging something substantial with a well-rounded whoosh, although the medium sustain seems a little impeded. Both crashes should work in just about any musical situation that is not too heavy.