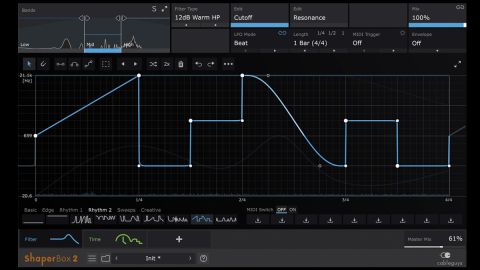 ShaperBox 2 is a slick multi-effect update that adds depth and power without losing the ease-of-use and intuitiveness at its core.

Cableguys’ Shaper effects line has been around for a few years now, and has proved popular with electronic producers from many a genre. This is thanks largely to its ability to add complex, custom modulation to any sound source in your DAW, and all via its easy-to-understand interface.

Originally released back in 2016, ShaperBox is the logical evolution of the range, placing all of these sibling processors into a single, semi-modular multi-effect plugin. There are five processors included here – available to purchase either as a bundle or individually – all of which have been updated for the launch of ShaperBox 2.

For those keeping track, versions included here are, VolumeShaper 6, TimeShaper 2, FilterShaper Core 2, PanShaper 3 and WidthShaper 2. The applications of each of these should, hopefully, be pretty obvious from their names – modulating volume, pan position, filtering and stereo width. The only device that isn’t self-explanatory is TimeShaper, which is a kind of virtual tape looper that samples a buffer of incoming audio and then modulates the ‘playhead’ position to allow for all sorts of glitch, stutter and reverse effects.

Broadly speaking, the overall design of ShaperBox 2 hasn’t changed that dramatically from version 1. As before, the plugin has five slots that can be loaded by one of each processor.

These can be rearranged so that the effects run in whatever order you like, although sadly there’s still no option to have more than one instance of any effect, which means that you can’t, for example, have two filters running in series.

Of course, there’s nothing stopping you placing multiple instance of ShaperBox onthe same track in your DAW, but the resulting combinations can’t be saved as you might a single preset.

Layout-wise, each processor is focused around a central space for creating and adjusting the shape of the modulation. Shapes can either be drawn manually from scratch or selected from a handy range of predesigned curves, patterns and sequences.

The modulation grid itself can be adjusted using controls to set the length and rate, which can be sync’d to host tempo or free-running, with plenty of options for creating polyrhythmic movement and using odd time signatures.

Modulation shapes can be triggered and switched via MIDI too, and it’s here that the plugin becomes really powerful – the ability to change patterns of modulation across the course of a track, or depending on the note played in a melody, can create some really interesting results.

The range of drawing tools used to design and adjust modulation shapes has been expanded for version 2, adding specific pen tools for quickly creating lines, curved arcs and ‘s’ shapes. Selector tools allow for multiple automation points to be shifted around, and curves can shifted left and right on the grid, doubled and randomised.

With these new tools ShaperBox is easier to use than ever; creating both extreme and subtle modulation feels intuitive as a result. Each processor can be applied across up to three frequency bands individually using a band-splitter found to the top left of the UI.

Two sliders are used to freely divide the low, mid and high frequency bands. These can be placed anywhere from 20Hz to 20kHz with band-split curves that can be set at 6, 12 or 24dB. Effect types and modulation shaping can then be set individually for each of these three bands.

• Unfiltered Audio BYOME
Lacks LFO tools, but makes up for it with presets and modulation tools.

There are some other new effect-specific features here too. The latest versions of FilterShaper Core, PanShaper and WidthShaper add envelope followers, allowing for dynamic modulation relating to the incoming audio. These are available for each of the defined frequency bands and are adjusted with Attack/ Hold/Release controls along with Threshold, Amount and Depth options. These can follow either the main incoming signal or a sidechain input and the envelope follower can be blended with the ‘shaped’ LFO too.

VolumeShaper, meanwhile, gains a compressor, which works particularly well for transient shaping on drums. Paired up with complex level adjustments that could already be achieved in VolumeShaper, it makes for a very powerful tool – it’s especially handy for carving up drum loops and old vinyl samples to help them sit with an electronic groove. Again, the compressor is multiband and can accept sidechain signals too.

Version 2 also adds new modes for some of the effects. FilterShaper has a selection of phasers in its already generous list of filter types. PanShaper gains a Haas mode as well, adding a new way to create spacial effects.

Finally, there’s also a new ‘fine’ timing mode for TimeShaper, which adds the ability to emulate the inconsistencies of vinyl or tape by introducing subtle modulation. Taken as a complete package Cableguys’ ShaperBox 2 makes for a very powerful multieffect tool, and one that makes adding detail and complexity to tracks feel simple and intuitive.

While there are ways we’d like to see it develop further – the ability to add multiple instances of an effect inside the plugin, options for routing effects in parallel as well as serial – ShaperBox 2 offers a deep well of creativity that more than justifies the price of the Shapers sold separately, let alone its low bundle price.

MusicRadar verdict: ShaperBox 2 is a slick multi-effect update that adds depth and power without losing the ease-of-use and intuitiveness at its core

"ShaperBox should be an essential companion for anyone working with loop-based music. Purely on a time-saving, functional level, it gives you quick tools that can be used in place of fiddly editing and automation, and you can breathe new life into static audio loops."
MusicTech