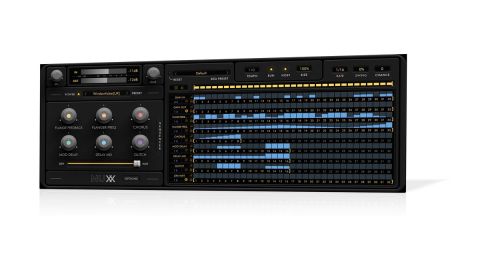 We really hope the parameter naming thing gets fixed, but even if it doesn’t, Nuxx is absolutely awesome.

Developed by Audiaire in partnership with Sinevibes (who coded most of the DSP), Nuxx (VST/AU/AAX) is a step-sequencing multieffects module based on the parameter sequencer from the company’s Zone synth.

In essence, it’s all about creative Macro modulation of up to three parameters (plus dry/wet mix) from each of six effects at a time, drawing on a well thought-out range of 30 diverse processors.

The effects modules are found in the puzzlingly named Options panel (why not just call it FX, particularly given that there’s nothing else in there?), where they appear as six vertical columns of three contextual parameter knobs plus a Mix knob each. Clicking the name of an effect ‘strip’ opens the full 30-strong menu (see The crux of Nuxx). Select one and the controls update to reflect that processor: Attack, Threshold and Makeup for Compressor; Voice, Frequency and Depth for Chorus, etc. However, while the knobs themselves are contextual, their naming is resolutely generic - they’re just called ‘Ctrl 1’, ‘Ctrl 2’ and ‘Ctrl 3’, with the parameter names (or unused status) only appearing as tooltips when they’re actively clicked.

Rather than actually operate the controls in the Options panel (although you can do that if you like), the idea behind Nuxx is to freely assign them to the six Macro knobs for grouped manipulation and sequencing. Each Macro can control up to ten parameters from the six loaded modules, and assigning them is done by dragging and dropping from the Options panel, or via the right-click menu. Again, though, with generic naming used in the assignment menus (‘Effect 1, Ctrl 1’; ‘Effect 1, Ctrl 2’, etc), and every control always listed, even if its host slot is empty, this part of the UI feels half-baked. At least the Macros are namable, so once you’ve built your mad multieffects module, you can make it easy to take in at a glance.

With Sinevibes DSP wizard Artemiy Pavlov at the helm, Nuxx’s 30 effects modules were always going to be stellar.

A broad church of processing is represented, from relatively conventional distortion, compression, filtering, chorus and flanging, to a smorgasbord of delays (including the physics-emulating Ball Up/ Down and Rain Drop), phasers (4, 6, 8 and 12 poles), a fabulous barberpole frequency shifter, and three sizes of reverb. The two or three parameters available for each are always the ‘right’ ones, of course, making sequencing unfailingly productive. In an oddly hierarchical quirk, though, if multiple Macros are linked to the same control, only the highest-numbered one actually has any effect, rendering the other assignments pointless. We think they should offset each other, or switch down to the next lowest Macro with the same assignment when no steps are active in the dominant one.

The Sequencer (which folds away if you just want to manually control or automate the Macros) is supremely versatile. Each Macro gets its own zoomable lane, as do input and output gain (enabling ‘trance gate’-style chopping without any effects in play), and the global dry/ wet Mix. Pattern lengths (both start and end points are editable) and rates are independent for each lane, enabling the programming of polyrhythmic sequences. Patterns can run at up to 32 steps and multiply the base rate (8/1 to 1/128, synced or unsynced) by anywhere from 8x to 1/128; and the Swing and Chance parameters introduce shuffle and alter the probability of step playback. Individual steps can be muted and unmuted, and a ‘master’ lane provides global length adjustment and step mutes. You can bypass and randomise lanes, and a wealth of very handy preset patterns, scales, arpeggiations (for the pitchshifting effects and lane modifier functions) are on tap.

The naming thing is a bit frustrating, and we’d like the ability to reverse, narrow and shift individual control ranges within each Macro; but we absolutely love Nuxx’s wildly inspiring proposition, brilliantly realised roster of processors (Sinevibes through and through!) and incredible sounds.