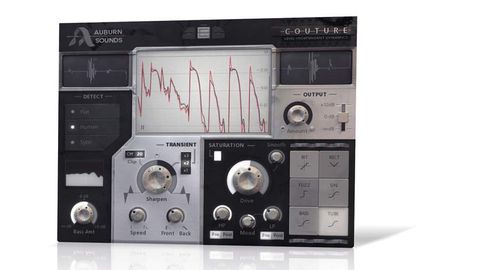 At the input, three Detect modes switch between emphasising sibilant (harsh) frequencies, a flat response and equal loudness, while the Bass Amount knob increases or decreases the sensitivity of the detector to bass frequencies. Shaping of transients is dialled in with the Sharpen knob: clockwise to emphasise them, anticlockwise to pull them back. At the default x1 multiplier, the effect is comparatively restrained, but the x2 and x3 modes greatly expand the range - and, consequently, versatility.

The Speed and Front/ Back controls enable adjustment of the length of the transient processing and its temporal positioning - these are particularly useful when using transient suppression to ‘raise’ the sustain of a sound.

The Saturation section offers six styles of distortion - Tube, Fuzz, Rectify, etc - and features high- and low-pass filters, the latter of which can be modulated by the crest factor, via the Mood knob, responding to changes in the dynamics of the input signal.

Couture is a unique effect that delivers a very different style of transient control to other plugins of its ilk. Despite the broad range of the multiplied Sharpen parameter, it feels more ‘organic’ than other transient designers, which is often a good thing in terms of transparency, but can also lead to unexpected and unusual results depending on the source material. The saturation, on the other hand, sounds fantastic across the board.

As you’d expect, Couture is most at home processing drums and percussion, but it’s also surprisingly good at upping the front-end definition of basses and lead synths.