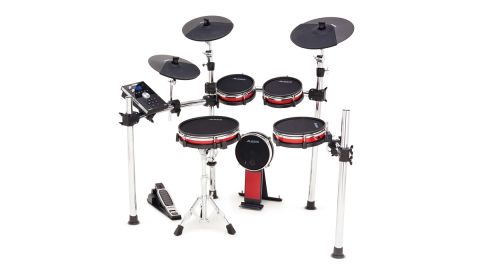 The Crimson doesn’t fail to deliver in terms of value for money. This sturdy package, although a little basic in places, offers a massive amount of functionality and would be right at home in any practice room.

From effects processors to drum machines, synthesisers to audio interfaces; in the 30-plus years since the company was established, Alesis has always placed the utmost importance on providing “bang for the buck” to its customers.

Enter the new Alesis Crimson e-kit which, with a retail price of well under a grand, aims to punch above its weight with a host of higher-end features.

The five-piece Crimson mesh electronic kit comprises an 8" kick pad, a 12" snare, two 8" rack toms and a 12" floor tom. Except for the kick, all drum pads are ‘dual-zone’ which means that they have separate sensors for the head and rim. To complete the set-up, the basic configuration includes a 12" hi-hat (with control pedal), a 12" dual-zone chokeable crash and a three-zone (bell, bow and edge) 14" ride. The kit is supplied with a sturdy four-post chrome rack system along with a snare stand for the 12" pad.

All drum heads are Alesis’ own black mesh, which until now could only be found on the higher-end Strike series. In fact, this isn’t all the new model has in common with its older siblings - the Crimson’s ‘shells’ also feature a red wrap, helping them look more like a real kit. The Crimson pads however are noticeably shallower than that of the Strike.

The sound module is a compact and stylish affair. Taking pride of place in the centre of the unit is a large metal rotary dial which is used to scroll through kits and settings. Split horizontally across the centre, the top half is finished in a gloss black while the bottom half has more of a smooth matte effect.

The gloss section plays home to a small blue LCD screen, master volume and headphone level controls, and some of the main navigation buttons: menu, down, up, enter and exit. The bottom section includes left and right buttons, click and tempo controls and record/start-stop. Topping off the front fascia is a sleek backlit Alesis logo.

In terms of connectivity, the module features mini-jack headphone and aux-in ports, 1⁄4" left and right jack outputs, midi in/out ports and a USB (B) port, enabling USB MIDI capabilities. In addition, there are two 1⁄4" trigger outputs which allow for a fourth tom pad and a second crash to be added. The pads included with the kit are connected via a 25-pin loom which plugs into the underside of the unit when mounted. This slots snugly into the mounting system and screws in place, ensuring there is no chance of any failed connections.

Next to the power input on the right-hand side of the brain is a USB memory slot which is where the Crimson’s capabilities really start to unlock. With a regular USB stick it’s possible to load user samples into the module’s sound banks, save and load custom kits, play full songs and backing tracks straight from the external memory with no need to import, and record up to 99 drum parts in real-time directly to the USB. The former is a top notch feature which, to put it in perspective, has only just appeared on Roland’s flagship TD-50.

Setting up the frame was so straightforward that we’re confident enough to say that most people probably won’t need to open the instructions. The four-post rack system feels weighty and heavy duty - properties shared with the plastic connecting brackets and sturdy feet. The mirror finish chrome immediately gives the kit some credibility before any of the other components have even come out of the box.

The tom brackets and L-rods enable a high level of customisation and within no time we’ve got nearly everything where we want it. Why nearly, you ask? Well, the included snare stand, although a welcome addition, seems a tad short for the task at hand. Perfect we’re sure for an acoustic snare, but limiting considering how shallow the electronic snare pad is. Because of this, we found we had to angle the snare away from us in order to play rimshots comfortably.

The module comes programmed with 50 kits ranging from acoustic to electronic, to percussion synths and tuned world instruments, plus 20 empty patches for custom creations. We picked a basic funk kit and used it as a starting point for creating my own sonic vision.

With a bank of over 600 included sounds, there are plenty to choose from, although a massive chunk of these are taken up by electronic sounds, FX and percussion. There are a few basic editing options which can be used for each sample such as pitch, reverb and delay. The volume level of each source can also be adjusted independently, as well as panning - great when playing with headphones.

The module also contains 60 built-in playalong tracks which cover pretty much any style you could ask for. From heavy metal to big band jazz and everything in between, these are not necessarily the most pleasant to listen to but make an excellent practice tool nonetheless.

The added USB capabilities mean you can load up a memory stick with your own songs or backing tracks (WAV or MP3) and while away the hours. It’s then possible to press record and track your drum takes straight back onto the drive.

Loading in our own samples was similarly straightforward, though the manual did need to come out to learn the process. At this point we did discover something slightly unusual. It turns out that you cannot delete your own samples individually, only all at once. This seems like a massive oversight which will, we hope, be addressed by future firmware updates.

One of the remarkable features of the Crimson module is the level of control possible over each sample. Sound files can be set up as loops or one shots and even separated into mute groups. It is also possible to configure any pad as a tap tempo, click on/off or kill switch. This kind of functionality is normally reserved for specifically designed sample pads which certainly adds an extra string to the Crimson’s bow, especially if it’s being used as part of a hybrid set-up.

In terms of general playability the Crimson is of a fair standard but nothing to get too excited about. For the price-point, the features offer undeniably good value for money, although there are some weaker points. The mesh heads function well although they don’t seem to like being cranked too tight. We tightened the snare as tight as it wanted to go but it still didn’t feel enough for my tastes.

The cymbals respond well and the larger ride offers enough natural movement to bring its response closer to that of the real thing. Having three separate triggers for the bell, bow and edge is also a great touch but the undersized bell made it difficult to trigger consistently and felt very unforgiving. A lack of cross-stick option means you can choose only between a rim-shot sound or the cross- stick, rather than both controlled by velocity; a common feature found with other e-kits.