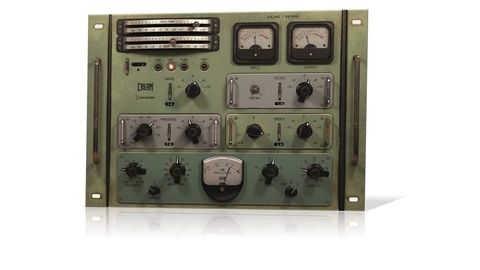 With its flexible semi-modular architecture and stunning convolution engine, Cream is a cut above the average vintage strip.

Apparently, Cream, Acustica Audio’s new convolution-based channel strip, is the first in a series of three plugins, “each embodying a volume of Dante’s Divine Comedy”.

We don’t get it, either, but this is certainly its most ambitious Acqua effect yet (VST/AU/AAX), capturing the preamps, EQs and compressors from a range of genuine vintage and cloned EMI console and tape hardware - see Cream on top. The full Cream channel strip is supplemented by three stripped-out section plugins - Cream Pre, Cream Comp and Cream EQ - and all four come in regular and Zero-Latency versions.

At the top of the interface, Cream’s Preamp section offers users a choice of Line, Mic or Tube emulation. Line and Mic let you select one of 24 (Line) or 12 (Mic) input channels, all sampled all the way to grouped output, the idea being to load Cream onto every channel of your mix and set each to its own channel for authentic console colouration. This might be something that’s viable with the Cream Preamp plugin, but the full channel strip may well prove to be preclusively CPU-heavy.

The Tube setting, on the other hand, mines its two tape deck preamps for three options. The Cream Preamp and Cream Comp plugins also add in the preamp from the RS124 tube compressor. The Preamp Input Trim is gain-compensated, so the output always maintains unity, offset by the Output Gain control.

Acustica isn’t saying exactly which pieces of vintage British hardware have been sampled in the development stages of Cream, but a quick look at the manual does make it glaringly obvious.

The EQ section is more straightforward in spec: the A models (represented by a green backplate) are all captured from SoundDrops’ clone of the EMI REDD valve console EQ, while the B filters are from the TG12345 again.

Finally, the two Compressor models also take in solid state and valve-based processors for two distinct sonic flavours. Compressor B is the limiter stage from the EMI TG12345, and C is the vari-mu RS124, based on the American Altec 436B.

The four-band EQ enables selection of various modes for each of the two models (TG1234 and SoundDrops REDD emulation), with no restriction on how they can be combined. The Bass band operates as either a low-shelf, a fixed-frequency (100Hz) bell, or a high-pass filter; the Presence band is always a bell; and the Treble band reiterates the Presence band but with the addition of a high shelving mode.

The Magic band delivers three ‘character’ response curves: a bass boost from 120Hz down; a continuously adjustable broad 1kHz ‘loudness’ boost or cut (confusingly given the same name in the UI as the Bass band’s low shelf); a fixed-frequency high shelf in three subtly different variants; or the same HPF as the Bass band.

The compressor’s two models share the same controls. Threshold and release are both adjustable; and the nifty SHMOD knob tweaks the shape of the attack envelope from that of the original hardware through a much faster range, to up-to-4ms of lookahead. The standalone Cream Comp adds dry/wet mix sidechain filtering, an external sidechain input and the aforementioned preamp circuit.

Cream of the crop

Working like a semimodular EMI channel construction kit, Cream’s ability to freely combine disparate tube and solid state preamp, EQ band and compressor models within a single plugin is as fascinating to play around with as it is empowering. The inevitable convolution-parameter change lag is as irksome as ever, and the miserable thumbwheel-style control used to switch between EQ and preamp types is one of the worst GUI elements we’ve ever come across, but Acustica has once again absolutely nailed the all-important sonics. From warm and rounded to hard and punchy, and quite literally everything in between, Cream succeeds in putting that rich, musical ‘Abbey Road’ vibe firmly in the box.