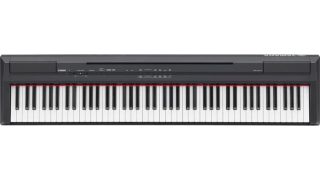 Yamaha’s P-105, which replaces the P-95 in their lineup, is an inspiring tool for many practise, performance, and studio uses. Its extremely approachable layout and design invite a beginning player to explore, and its grand piano sound and action will satisfy accomplished pianists as well as serious students and music educators.

I’m a recent Berklee graduate and singer-songwriter who performs solo, in a duo with an electric violinist, and sometimes with that duo plus a full band. Like most musicians in New York City, I also don’t have a car and get to gigs by cab and subway. With excellent grand piano sound, an uncomplicated yet very useful feature set, and lightweight, it proved to be ideal.

Where some digital pianos in this price range have a single full-range speaker on either side, the P-105 has separate woofers and tweeters, vibrantly reproducing low frequencies while leaving the treble especially clear. Like the keys of an acoustic piano, the lower register on the P-105’s graded action has a more weighted feel, while the higher keys respond more lightly. Also, velocity response can be adjusted to your touch via four response settings: soft, medium, hard, and (if desired) fixed.

The P-105’s main grand piano sound (called Pure CF because it's sampled from their CFIIIS concert grand) is a breath of fresh air: strong, articulate, and resonant. It has two acoustic piano sounds, covering the mellower and brighter variants we’ve come to expect from Yamaha instruments. Both sound full and rich, with tons of harmonic and dynamic range, and I’d be satisfied with them in a digital piano that cost twice as much.

Non-piano sounds include realistic Rhodes and Wurly EPs, a couple of serviceable drawbar organs, pipe organ, harpsichord, a string pad that’s good for layering, and electric and upright basses for your left hand.

Ever feel like your chord progressions sound too bare on their own? Play your chord ideas, or even just a simple bass note, and the ten Pianist Styles will provide accompaniment, following your notes and chords as you go. These aren’t accompaniment styles with full instrumentation as on an arranger keyboard (think PSR or Tyros). They’re more like having an extra person sitting to your left, but they exist on all sounds, not just piano. In addition, separate drum patterns give you ten different rhythms to jam along to. Once you come up with a great piece of work, the onboard two-track MIDI recorder lets you capture it.

The USB-to-host connection lets you transfer your musical ideas to your computer as MIDI files for further work in a DAW or sequencer. Additionally, the stereo 1/4" line outs make it easy to connect to your recording interface, speakers, or mixer. This function makes recording a songwriting session or even a gig easier than using the stereo headphone out and a Y-cable—which is what some affordable digital pianos and portable keyboards would make you do.

The duet mode is ideal for lessons, as teacher and student can split the keyboard to be able to play identical phrases in the same note range, as opposed to playing in different octaves as one would need to on an acoustic piano or on any digital that lacks this feature. The assignable split is also extremely easy to use. For instance, if you wanted a bass in the left hand and a vibraphone in the right, you’d hold down the L button while pressing the Bass button and then hold down the R button while pressing the Vibraphone button. The keyboard is split at the F# below middle C by default, and you can change the split point by holding L and pressing a key.

I took the P-105 to a recent gig and, being rather petite, couldn’t believe how easy it was to carry an 88-key weighted digital piano by myself. This is a big deal for me for two reasons. Acoustic pianos are usually absent from the venues I play, so I almost always bring my own keyboard. Sometimes I use my older Yamaha P-60, which has very authentic sound but weighs about 40 pounds. This is taxing because I also have a stand and accessory bag and can’t put the P-60 over my shoulder to load in in one trip.

Thus, I’ve been borrowing friends’ portable keyboards and have been continuously frustrated with the dinky grand piano sounds on a wide variety of them. Enter the P-105, which I put in its soft case and slung over my shoulder with ease. One trip achieved!

At a particular show with the P-105, my piano/violin duo was playing without the full rhythm section we sometimes have, and we knew the set would feel less full for this reason. To beef up our sound, we took advantage of the two-track recording function in order to bring in bass lines and melodic ideas that I wouldn’t otherwise be able to play at the same time as my main piano parts. For a number of songs, I did the recording passes live and was then able to play and pause them when desired (not unlike using a looper pedal), and for our first song, I pre-recorded the bass line on one track and a second piano part on the other before heading to the gig. It was wonderful to be able to enrich the music in a live setting like that.

As for amplification, the sound was pristine. The P-105’s Intelligent Acoustic control really worked as advertised through the venue’s P.A. system. It’s a realtime automatic EQ that keeps your sound so balanced that you actually feel as if it’s being adjusted by a sound engineer based on your volume setting and playing velocity. Similarly, the action’s sensitivity and velocity response proved trustworthy throughout the night, making for a consistently solid sound—something not to be taken for granted in the world of differing rooms, P.A. rigs, and numbers of musicians onstage.

The Yamaha P-105 is an inspiration to the student, songwriter, and performer, and (thanks to its Intelligent Acoustic feature), even the engineer. I’d highly recommend it to anyone looking for a first digital piano. The main grand piano sounds are superb and the supplemental sounds are fun to play. With its Pianist Styles, drum rhythms, duo mode, easy splitting, and two-track MIDI recording, you have the tools for practice, creation, and performance across a multitude of scenarios. It’s not often that you see this kind of no-compromise grand piano sound and useful feature set to come as affordably as this. Factor in the portability and the Yamaha P-105 handily provides key buy-winning bang for your buck.

Bottom line
Excellent grand piano sound, enough features to be musically useful but not daunting, ultra-portability, and low price. If the P-105 had an internet meme in LOLspeak, it would be “Basic: Ur doin’ it right.”