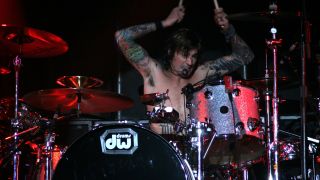 DW made the announcement today, marking the return of one of the company’s earliest adopters. Tommy Lee’s relationship with DW began in the late 80s when the Crue drummer started using the brand’s pedals, before he started using DW drums during Mötley Crüe’s Dr Feelgood touring era. Tommy was also featured in the DW promo video series, The American Dream in the 90s.

In a statement made by DW, founder Don Lombardi talks about how Tommy’s visits to the DW factory to have his pedals tuned led to him trying out a kit that John Good was designing.

“He started playing and wouldn’t stop; he was amazed at how the drums sounded.” explains Lombardi, “A light went on in my head that Tommy Lee represented a generation of drummers who hadn’t experienced handcrafted drums.” A short time later, he bought a kit and a year later he became an official DW Drum endorser.

Tommy Lee adds, “Welcome back?  I never left.  I just took a lil’ journey trying some new things. And speaking of new things, damn they’re poppin' at DW.  I’m insanely excited about them and the new gear. So stoked to share everything with ya!”

Mötley Crüe are scheduled to embark on a 31-date stadium tour with Def Leppard, Poison and Joan Jett & The Blackhearts this summer, which - at the time of writing - hasn’t been cancelled due to the Covid-19 crisis.