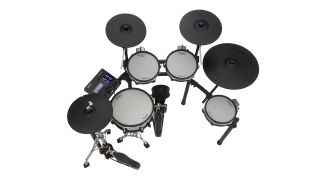 It’s a problem that has afflicted guitarists and keyboard players for years: what to do when you’re bored with all of the sounds in your gear?

For drummers, the answer usually means trying a new approach to the same drum with different tunings and dampening, or forking out for a new snare or cymbal.

One of the many benefits of an electronic drum set is the ability to play other electronic instruments from your pads via MIDI, meaning that you're not limited to the sounds that live inside your module: if it can be sampled, it can also be triggered.

The trend for creating multi-layered drum kit samples has boomed over the last 10 years or so, meaning that e-kit drummers can get some extremely convincing acoustic sounds from their electronic kits by hooking them up to their computer.

Top-rated electronic drum kits for every budget and playing level

These kits are usually captured in desirable studios and acoustic spaces, often by seasoned pros with a raft of high-end outboard gear, giving us access to the types of drum sounds that we used to only dream of. What’s more, some of these generous soles then make a selection available for free!

So, if your module is equipped with a traditional MIDI socket, or a USB socket that handles MIDI duties, here are three brilliantly sampled acoustic kits that you can use to jam along to songs or record into your own productions that won’t cost you a penny.

Perfect Drums player is a stripped back version of Naughty Seal’s Perfect Drums (currently $100) that comes for zilch. In order to take advantage of the free stuff, you’ll need to download the Perfect Drums Player, plus the demo kit sample pack. As a bonus, there’s also a set of samples of a Ludwig Carl Palmer snare available. There are some limitations - the round-robin sample playback (triggering alternative samples of the same velocity) is limited to a two rather than eight, so there will be a more frequent repetition. As well as this, the free kit allows triggering of 8 voices (kit pieces), so you are limited to kick, snare, rack to, floor tom, hi-hat, ride and two crashes. However, the interface is easy to use, and there is comprehensive control over individual levels, reverb and room ambience.

Steven Slate’s drum sounds are the stuff of legend. The engineer/mixer first created his samples and handed them out as business cards to industry big-wigs in the noughties as a way of getting his sounds into the right hands. From here he got requests to produce more and more sounds, until finally releasing them to us mortals for purchase. The latest version of SSD was released earlier this year, and Slate also made a free version available for anyone who wants to grab it. The pack comes with three free, fully-functioning acoustic kits that sound great for rock, metal, funk and pop, and Steven slate has also included one of his ‘OG’ snare samples that helped build his reputation.

You might be familiar with Spitfire Audio already - they’re prolific in the sampling game and a few years ago set up camp in Hedley Grange along with Queen’s Roger Taylor, Chad Smith and Andy Gangadeen in order to make use of the iconic acoustics (including John Bonham’s favourite stairwell).

Its LABS series of sampled instruments gives free access to a whole range of beautifully captured sounds, including some stellar acoustic drums. These samples aren’t as pre-processed as the other packs here, but that could be seen as an advantage if you want to work from a more transparent canvas when tailoring your sounds with EQ and compression. Simply sign-up to LABS and you’ll be free to fill your digital boots from the instruments listed on the page (scroll down for Drums).