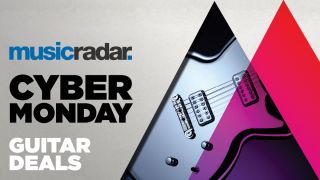 15% off a huge range of gear at Guitar Center
Cyber Monday deals don’t get much better than this: simply enter the code CYBER15 at the checkout, and you’ll get 15% off qualifying purchases of $199 or more. View Deal

Ibanez AZ242FTSG now $899.99| $400 off
Our favourite Ibanez deal yet – the AZ Series was only launched last year to widespread acclaim and this is an absolutely stunning example at a genuinely great price. AZ roasted maple neck and fretboard, Gotoh locking machine heads, stainless steel frets, Seymour Duncan Hyperion pickups and dyna-MIX switching style. What a spec for $899! View Deal

Line 6 Powercab 112 FRFR speaker cab: was $599, now $499
This feature-loaded 1x12 speaker cab is the perfect gigging match for any amp modeler, thanks to its full-range flat response, and clever onboard Speaker Modeling. Improve your live sound today for less with this $100 saving at Musician's Friend.View Deal

Epiphone ES-339 P90 PRO: $379 at Musician’s Friend
An almighty $120 discount makes this P90-loaded semi-hollow a must-buy for blues and roots guitarists, and boasts added comfort thanks to a reduced ES-style body and SlimTaper ‘D’-profile neck.View Deal

$150 off the G&L ASAT Classic Bluesboy at Musician's Friend

G&L ASAT Classic Bluesboy: $299 at Musician’s Friend
Besides its beautiful Turquoise Mist finish, this limited-edition single-cut is notable for its humbucker/single-coil pairing, yielding toasty neck tones and snappy bridge spank. With a whopping $150 chopped off the asking price, this is one of the best bargains we’ve seen this Cyber Monday.View Deal

Sterling by Music Man John Petrucci JP70: only $449.99
Now this really is a dramatic turn of events – a John Petrucci signature seven-string in stealth black for under $500! Astonishing deals like this don’t come every day…View Deal

$300 off the Epiphone Limited Edition Slash Firebird at Sam Ash

Epiphone Limited Edition Slash Firebird now $599| $300 off
When this guitar was released it retailed at $899 so this is a real steal for a limited edition model – only 900 have been made – and this is an exceptionally good one. AAA flame maple top, Seymour Duncan Slash open-coil humbuckers and the nice touch of Sprague Orange Drop capacitors on the tone controls just like the man himself. View Deal

£335 off this Hagstrom Super Swede in Vintage Sunburst at ProAudioStar

Epiphone Les Paul Traditional PRO-III Plus: , now $549
This Epiphone not only has the looks - thanks to a gorgeous flame maple top - but it has tones to die for, too, with made-in-USA Gibson ’57 Classic and Super ’57 zebra pickups, enhanced by coil-split, boost and phase controls via push-pull control pots. Sub-$1,000 Les Pauls don’t come much better than this, especially with $150 off the asking price at Musician's Friend.View Deal

Save $130 on this Silverburst Epiphone Les Paul at Musician's Friend

$130 off Epiphone's Les Paul Silverburst at Musician's Friend
This sleek, nicely spec'd Les Paul is now available for $549, down $130 from its usual $679 price tag.View Deal

Get $150 off the Epiphone G-1275 Double Neck
For when one neck just isn't enough! This limited edition doubleneck is guaranteed to turn heads, from the living room to the stage. View Deal

Epiphone Limited Edition 1966 G-400 PRO: , now $349
Available in Cherry or Black, this SG is the real deal for a bargain price. You get the classic horned mahogany body and Silm Taper set mahogany neck, teamed with a pair of high-output Alnico Classic Pro humbuckers, ideal for getting your Iommi on.

ESP LTD M-400 in Natural Satin: over $300 off!
This Seymour-Duncan loaded electric guitar is built for the recording and performing guitarist. And now with over $300 off, there's never been a better time to get your hands on it! Act fast to secure this awesome guitar before the crowd.
View Deal

ESP LTD MH-400NT in Natural Satin: only $409.99!
Featuring a mahogany body, 3-piece maple neck and a Pau Ferro fretboard which complements the Natural Satin finish wonderfully, this awesome electric guitar is now almost half off over at ProAudioStar.

ESP LTD EC-1000 Koa Natural now $599| $449 off
The best LTD we've seen yet! The EC-1000 pro spec guitar with a stunning koa top on its mahogany body. Features include an eboby 'board, Seymour Duncan Jazz and Custom 5 pickups. Tonepro locking tailpiece. This is an incredible deal! View Deal

Jackson Pro Series Dinky DK2 now $499| $350 off
This is an outrageously good spec for the money – a rock and metal machine with mahogany body, graphite-reinforced bolt-on maple neck with a hand-rubbed urethane back finish and wrap-around heel for comfort. A classic pairing of Seymour Duncan JB and 59 humbuckers will give you monster tones too! View Deal

Danelectro 59X12 12-String Electric Guitar: only $429
Danelectro calls the 59X12 their best sounding 12-string ever. And at only $429 there's ever been a better time to finally own a 12-string!View Deal

Boss RV-500 Reverb Pedal: now $249.99 | Save $100
Deep-dive into a world of ambience and explore even greater distances with this spatial navigator.View Deal

Boss VE-500 Vocal Performer Pedal: now $299.99 | Save $100
The all-in-one box for singers, with its own harmonizer, pitch corrector and vocoder as well as on-board studio effects…View Deal

$60 off the Boss DD-7 at ProAudioStar

Boss DD-7 Digital Delay: was $159, now $99 at ProAudioStar
With the DD-8 on the horizon, Boss was bound to discount the DD-7, yet this remains a killer deal on an industry-standard delay stompbox.View Deal

$150 off this Gretsch Electromatic Jet at Guitar Center

Gretsch Guitars FSR G5245T Electromatic Jet: only $499.99
Save $150 on this stunning Gretsch Electromatic electric guitar over at Guitar Center. With a mahogany body and maple top, and 22 medium jumbo frets on a walnut fretboard, this guitar has it all - looks, tone and style.View Deal

Ibanez AZ2204F Prestige: $400 off at Musician’s Friend
Invest in your guitar playing, and get one of the finest electric guitars available today for $2,099, a $400 saving from its original price of $2,499. This precision-built, versatile model is the epitome of contemporary electric guitar design, with an impressive feature set and effortless playability.View Deal

IK Multimedia AmpliTube MAX: $249 at Sweetwater
This all-encompassing suite of guitar amps and effects is half-price right now at Sweetwater, making it one of the best guitar plugin deals we've seen so far across Cyber Weekend.View Deal

Jackson Misha Mansoor Juggernaut HT6: only $449.99
This immense, Misha Mansoor-designed axe is a stunning piece of equipment. Don’t miss your chance to get one with this top Musician’s Friend Cyber Monday deal.View Deal

Up to $1,200 off D'Angelico guitars at ProAudioStar

43 D'Angelico Deluxe guitars: up to $1,200 off @ ProAudioStar
By far one of the best electric guitars this Black Friday and Cyber Monday is these ridiculous discounts on 43 semi-hollow models from D'Angelico, with some markdowns reducing $1,999 guitars to just $799. Not to be missed.View Deal

Fender Player Stratocaster Maple Fingerboard Black Ltd Ed
Nail the David Gilmour (and U2's Edge) Black Strat vibe with this absolute beauty from the Player Series for $549.99  – a saving of $125 from $674.99View Deal

Fender Player Jaguar in Surf Pearl: now only $499.99
Bag an awesome Fender offset for under $500. With an alder body, Alnico pickups and a perfectly configured neck, this electric guitar has the looks and tone to boot.View Deal

Get the highly regarded Fender Bassbreaker for only $549
Packing a Celestion 1x12 speaker, lots of neat features for studio guitarists and a wonderful tone, this combo is a great choice – and you can now get this limited-edition model for $200 less than usual. Bargain!View Deal

Up to $200 off Marshall Origin combo amps at Musician's Friend

Marshall Origin 50C: was $749.99, now $549.99
Get this all-in-one combo amp from one of the world's most prestigious amp manufacturers - complete with two distinct voices, multiple onboard controls and a built-in FX loop.View Deal

Marshall Origin 20C: was $599.99, now $449.99
Marshall's mid-range amp packs a ten-inch speaker, a range of controls, along with two distinct voices, enabling you to get just the sound you want.View Deal

Marshall Origin 5C: was $399.99, now $249.99
Even the lowest-spec Origin amp is a great piece of kit – and at this price it's an absolute bargain. Get in there quick, though, as these could sell out fast.View Deal

Waves Berzerk distortion: was $99, now FREE
Nothing beats a 100% reduction, combine that with a brand new product and you have a winner. Claim your free version of Waves Bezerk distortion plugin now.View Deal

Epiphone Les Paul Custom Pro Koa: was $649, now only $529
Easily one of the most versatile electric guitars ever to bear the Les Paul logo, available in a mouth-watering natural finish.View Deal

$100 off these two Martin Special X1AE models at Guitar Center

Martin Special Dreadnought X1AE electro acoustic: $499.99
This ace Martin acoustic is an excellent all-rounder. Right now you can save $100 off the asking price.View Deal

$500 off the Supro 1650RT Royal Reverb combo amp at Sweetwater

$100 off the Fender Player Telecaster in Silverburst at Musician's Friend

Get $500 off the Supro 1650RT Royal Reverb
This powerhouse of an amp is loaded with tube-driven tremolo and spring reverb, and comes with Supro's trademark blue rhino hide tolex, for classic looks and a classic sound.View Deal

Fender Player Telecaster: was $674.99 now only $574.99
Get your hands on an authentic Fender Telecaster this Black Friday for just over $500. With a classy Silverburst finish and A-class tone, this guitar would be more than a worthy purchase.View Deal

$130 off the Bogner Oxford Fuzz pedal at Sweetwater

Bogner Oxford Fuzz: now $99 | save $130 at Sweetwater
This innovative fuzz pedal teams a Ferrosilicon transistor with a Rupert Neve-designed transformer for natural-sounding tones that deliver an extremely dynamic response.View Deal

$100 off the Epiphone Les Paul Studio Deluxe at Guitar Center

Epiphone Les Paul Studio Deluxe: , now $299.99
This electric guitar is spec'd miles above its price bracket. With a gorgeous white and gold color scheme, this instrument has it all. Jump on this low price and secure yours today.View Deal

$60 off the Boss DD-7 Digital Delay pedal at ProAudioStar

Boss DD-7 Digital Delay: was $159, now $99 at ProAudioStar
With the DD-8 on the horizon, Boss was bound to discount the DD-7, yet this remains a killer deal on an industry-standard delay stompbox.View Deal

KHDK No. 1 Overdrive: was $199, now $69 at ProAudioStar
This roaring dirtbox is one of the highlights of the Kirk Hammett-fronted pedal company's range, utilizing a pair of gain stages to produce a rich, harmonic overdrive - and a $130 discount makes this a damn-near essential purchase.View Deal

$200 off these two Boss Nextone amps at Guitar Center

Nextone Guitar Artist Amp: now $499.99 | $200 off
The bigger brother in the does-it-all series, offering the same tones and effects, plus even more versatility and power at 80-Watts.View Deal

$70 off the MXR EVH 5150 Katakana Overdrive at Sweetwater

MXR EVH 5150 Katakana Overdrive: $70 off at Sweetwater
This limited-edition drive pedal has been given a limited edition Japanese makeover but inside the enclosure you'll find the Blue Channel of Eddie's signature 5150 III head. It's one of the best overdrives on the market and could be yours for just $129.99.View Deal

Pigtronix Bob Weir's Real Deal acoustic preamp: $99|$180 off
Grateful Dead legend Bob Weir teamed up with Pigtronix to create this no-nonsense acoustic preamp, which promises an unplugged-esque tone running direct into a PA at full volume, with no feedback. It's available with an astonishing discount at Sweetwater right now.View Deal

ESP LTD EC-1000 Koa Natural now $599| $449 off
The best LTD we've seen yet! The EC-1000 pro spec guitar with a stunning koa top on its mahogany body. Features include an eboby 'board, Seymour Duncan Jazz and Custom 5 pickups. Tonepro locking tailpiece. This is an incredible deal! View Deal